Microsoft’s got a new Halo coming out soon, and it is celebrating that impending release by spinning some of the shooter franchise’s classic tunes.

Halo is getting its own music station on the Dash Radio music app. Dash is a Web-based music site that serves curated and narrated playlists from some of the world’s most popular disc jockeys. The service already has plenty of electronic, hip-hop, and alternative rock playing 24/7, but all of that is about to get some company from the cinematic tracks of Halo. This is a new kind of marketing, and one that may have a strong effect on Halo superfans who adore the game’s lore and world. While a gamer waits for the Halo 5: Guardians to launch on October 27, they can jam out to the music they know and love from the shooter, and they might let their hype spill over through word-of-mouth or social media, where they can share this station with friends. 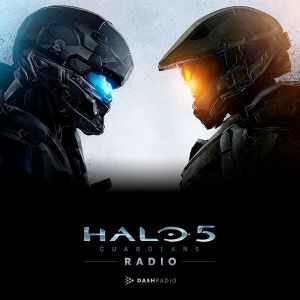 The new branded station, called simply Halo 5: Guardians Radio, will feature all the music from the triple-A sci-fi releases along with remixes and voice samples from the games. Dash’s DJs worked together on the playlist and they even incorporated some of the games’ characters as guest hosts. Halo 5: Guardians Radio debuts today and it will run for three weeks, which includes Halo 5’s launch.

“There’s never been before the opportunity like this for companies to create their own station,” Dash Radio founder DJ Skee told GamesBeat. “Obviously, people can do playlists. People can do radio advertising. But there’s been no way to click play on an app in the background and let it run and feel like you’re almost playing the game. You really feel like you’re in the moment.”

We asked Skee what it is about Dash Radio that enables this kind of partnership, and he pointed out that the technology of Dash equally empowers DJs and brands.

“Not just anybody can make their own radio station. It’s too expensive,” he said. “But the future of broadcast is creating these cool stations — even if they’re limited run. Y’know, Halo 5: Guardians Radio is going to play around the game’s launch, but we don’t want to overstay its welcome. We want it to be really impactful now, and then we’ll gear up for the next one.”

And if building a radio station that people can play in the background to get consumers hyped up is expensive on its own, then those costs look even crazier if you only need to run the station for a few weeks.

This is also something of a proof-of-concept for Dash. A partnership like this is the sort of native marketing that can potentially turn a Web-based radio service into a viable business. And the startup is definitely looking to do this with more games and other cultural product releases in the future — although Skee did say that his team feels like they only want to work with stuff that they like.

“We all love Halo,” said Skee. “I can’t wait. I’m still waiting on my final copy. The station is making me anticipate the game even more.”