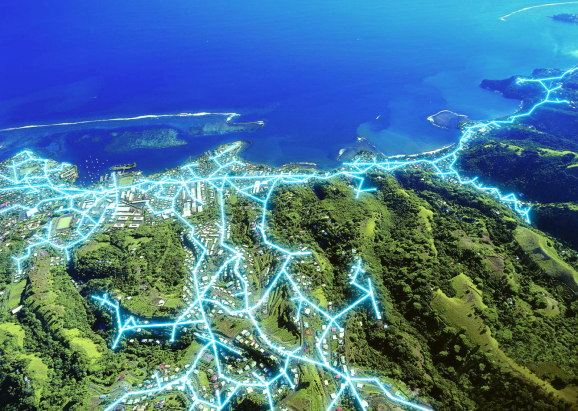 FireChat wants to unleash a new kind of telecom network in Tahiti.

If you’ve dreamed of a mobile world where you don’t need AT&T or Verizon Wireless, then you might consider a vacation to Tahiti.

Open Garden, makers of the mobile app FireChat, have announced a partnership with local leaders that will turn the French Polynesian island of Tahiti into a post-carrier paradise. FireChat is a peer-to-peer wireless networking app that relays calls and messages through phones by creating a mesh network that doesn’t require the traditional cell network.

Under the terms of the new project, residents of the island will be able to communicate with each other without needing a data plan or other Internet connection.

“We are very grateful for the opportunity to work on the Smart Tahiti project spearheaded by STN and with the City of Arue,” Christophe Daligault, chief marketing officer of Open Garden, said in a statement. “Our technology alleviates the dependency on traditional infrastructure and enables communities to create their own free communication networks that are disaster-proof.”

The hope is that the new network will help more people get connected to each other. But it will also provide a backup network in the event of some crisis that knocks out the island’s infrastructure.

Founded more than four years ago, Open Garden created FireChat to offer a different way for users to construct wireless networks. Users download the app, which then finds other nearby FireChat users via the phone’s Wi-Fi and Bluetooth. Fully encrypted private and public messages and pictures can be sent via this mesh networking, hopping from one FireChat user to another until they’re delivered to the intended recipient.

This ability to connect without using telecom carriers has made the app incredibly popular among people who want greater privacy. During last year’s protests in Hong Kong, the app was downloaded hundreds of thousands of times and was credited with creating a communication system that local authorities couldn’t monitor or block.

A few months later, Open Garden raised $10.8 million to continue expanding the reach of FireChat. The app has become popular at large concerts and festivals. And the company also hopes to use it to bring networks to people in regions with little or no wireless network access.

This past summer, the app became popular with those attending the Burning Man Festival in Nevada.