Chrome for Windows, Mac, and Linux now finally lets you mute any single tab. Just right-click a tab that is producing sound and hit “Mute tab.” You no longer have to decide between opening the tab to figure out what’s playing and closing the tab outright.

The new feature was added in Chrome 46, as first spotted by The Verge. This is the same Chrome release that removed the “OK Google” hotword to trigger voice search.

The ability to mute individual tabs has been available through browser add-ons and extensions for a while, but users want the option built into the browser. Back in February 2013, we first heard that audio indicators were coming to Chrome, and indeed, the feature arrived in January 2014 with the launch of Chrome 32. Now Google is finally taking the feature to the next level. 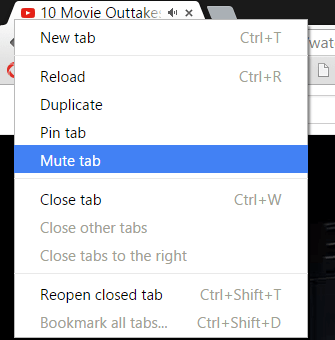 Mozilla is also adding similar functionality to its browser, which still doesn’t have any sort of tab audio indicators. Firefox 42 beta not only shows a speaker icon if a tab is producing sound, but allows you to mute (speaker icon gets crossed out) or unmute the given tab with a single click.

While Chrome has had audio indicators for more than a year now, it hasn’t let you easily mute tabs by default, until now. An option in chrome://flags/ was available, but it wasn’t on by default. In fact, it’s still there (the #enable-tab-audio-muting flag), and makes it possible to mute a tab with just a single click, if you prefer that method.

For whatever reason, Google has gone with the implementation that requires two clicks out-of-the-box. Either way, both solutions let you mute a tab without having to switch to it first, which is what really matters when you’re scrambling to silence that annoying tab that decided to start playing for no apparent reason.