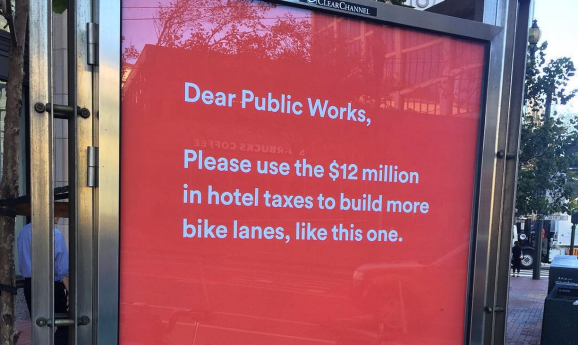 Airbnb’s latest advertising campaign in San Francisco doesn’t appear to have gone down well with some local residents. In ads seen as whiny and passive-aggressive, Airbnb appears to be telling the city how it should spend its money on public projects.

The backlash has forced Airbnb to apologize:

We apologize for Wednesday’s SF ads. They displayed poor judgment and do not live up to the values and humanity of our global community.

The company was venting over the beef it has with San Francisco’s regulators, with ads that popped up on billboards and bus stops around the city. Airbnb has since confirmed to SF Weekly that the ads will be taken down.

After years of avoiding taxes, Airbnb finally agreed to pay of several million dollars of back-taxes in February. It had, until that time, refused to pay San Francisco’s 14 percent hotel tax, which over the years may have amounted to as much as $25 million.

Pressure from San Francisco’s proposed ballot initiative, Proposition F, which wants to restrict unregistered short-term rentals from companies like Airbnb, seems to have played heavily into this latest ad campaign (read more about that here).

Airbnb is now spending $8 million to fight the initiative tooth and nail, arguing that the city won’t be able to collect as many tax dollars from its services if the ballot is pushed through.

Despite agreeing to pay the back-tax in February, Airbnb is still arguing that San Francisco is unfairly trying to double-tax its hosts, as well as accessing users’ personal data. But in a sign of mounting pressure, in August it agreed to collect taxes on rentals in Paris — now its biggest market worldwide.

The intent was to show the hotel tax contribution from our hosts and guests, which is roughly $1 million per month. It was the wrong tone and we apologize to anyone who was offended. These ads are being taken down immediately.

You can check out some examples shared on social media below:

Dear @Airbnb These passive-aggressive bus kiosk ads are *not cool* No love, the librarians https://t.co/rdo39E7sdz pic.twitter.com/Lf3TCAYYbw