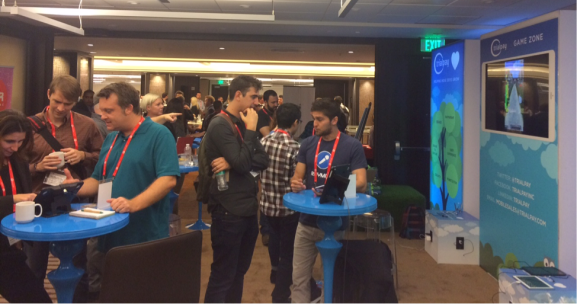 The TrialPlay Game Zone at GamesBeat.

If you attended GamesBeat in San Francisco last week, you probably saw TrialPay’s Game Zone, where six talented indie developers were selected to showcase their new games to conference attendees, which included press, investors, publishers, game developers, and other industry experts. This turned out to be a huge success, earning coverage on ABC7 news.

The all-star lineup consisted of:

We also put together a judging panel comprised of various industry experts to review all the games, provide feedback and advice on the games, and ultimately vote on one winner to receive up to $20,000 in TrialPay services based on innovation, creativity, and monetization ability. The judging panel featured experts from mobile gaming’s most influential companies including Glu, Kongregate, MobCrush, Facebook, and more.

“It’s inspiring to see new studios working hard to put forth innovative products in an extremely competitive market,” said Chris Akhavan, Glu Mobile’s President of Publishing and a member of the judging panel.

After two days of demoing and entertaining hundreds of GamesBeat attendees, the Game Zone developers waited in anticipation as VentureBeat’s Dean Takahashi announced the winner: Shop Heroes by Cloudcade. A fantasy shop simulation and city building game, Shop Heroes puts users in charge of building the ultimate city and dominating the global economy.

Cloudcade’s CEO, Di Huang, expressed how winning the Game Zone will help further propel his team on their path to success, “We are always looking for new channels to diversify our monetization as well as improve our UA strategy, and the $20,000 from TrialPay will help us do just that!”

While Cloudcade ultimately won the Game Zone grand prize, we hope that the networking opportunities and feedback all the developers received will be the lasting prize. We’d like to thank each developer for their hard work and participation. We’re very excited to see what the future holds for each team.

Tiffany Kwong is VP of Partnerships at TrialPay.