It’s probably not easy to make something that shares its name with one of the most popular and beloved releases of all time, and yet that’s exactly what developer Telltale games has done with Minecraft: Story Mode, its adaptation of Minecraft, which is out now for consoles, PC, and smartphones (and which I played on Steam). But will the same fans who turned that block-building phenomenon into a blockbuster find anything to love about a narrative-heavy adventure game?

Minecraft has sold more than 70 million copies on game consoles, PC, and smartphones. And if I had to give you one reason it is so popular, I’d say that it has a lot to do with the game empowering players to tell their own stories and make their own worlds. That’s almost the exact opposite of how’d I describe a Telltale game — only, I think that’s probably a really good thing here.

Let me explain why.

And be sure to read other GamesBeat reviews right here.

The world is beautiful and welcoming

Minecraft isn’t ugly. It may have a small polygon count and hyperlow-resolution textures, but that all comes together to make an attractive aesthetic that has dozens of clones for a reason. Telltale does a great job of using that recognizable world, which has spawned toys and books and an in-the-works film, without sullying it in any way. 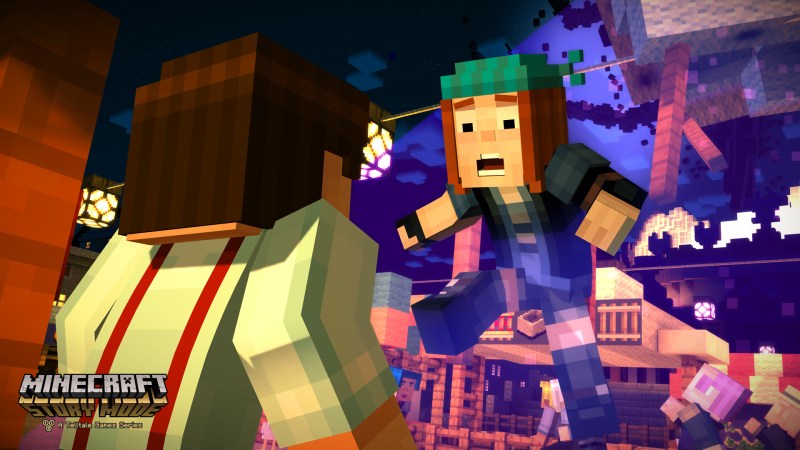 Above: The world and characters look familiar and appealing.

The characters look exactly like they do in the original game, but they just have living characters inside of them. And the world, with its punchable trees and kneeless animals, is also unchanged. For a fan of Minecraft, this makes the game feel like home. You know this world. You’ve had adventures in it. And having that familiarity definitely softened me up to follow along and take part in the adventures of others.

The characters (especially the pig) and the acting

Since Story Mode pulls so hard in the opposite direction of Minecraft’s strengths, Telltale’s game needs to establish some of its own. And it gets that in its characters and voice acting.

It was well publicized that Telltale hired actors like Patton Oswalt, Paul Reubens, Brian Posehn, and Ashley Johnson to bring the Story Mode characters to life, and it worked. Oswalt did an excellent job as the voice of my protagonist (you can choose different characters at the start, and that includes a woman character voiced by Johnson). And the writing of these characters builds on top of the strong acting.

You have the obvious archetypes, like the best friend, the cool kid, and the rival, and they all interact in believable and compelling ways that kept me hooked.

Of course, no one beats out your trusty sidekick/pet Rueben, a pig who is usually responsible for keeping the story moving along. In that way, he is Minecraft’s R2-D2, which is a serious compliment.

One of the best moments in the first episode comes early when you go through a Rocky-style training montage. It’s a great use of Telltale’s storytelling platform. Where the studio could’ve slowed things down to have you collect a bunch of crap, it instead has you doing the same thing through a bunch of energetic quick-time events.

The montage has a couple of great sight gags, and it helps maintain the pacing through the first act. This is crucial — especially when you consider that a large portion of the audience may prefer the open, instant nature of Minecraft proper.

Story Mode doesn’t try to be something it’s not

Minecraft is magical. It’s capture the imaginations of millions of people. Story Mode was never going to recapture that same magic. Instead, Telltale does its own thing while incorporating key aspects from Minecraft lore.

Yes, you use a crafting table and ride in mine carts. And you build objects and fight enemies. But all of that is to establish the Minecraft world in service of the story. I appreciated those connections, and I’m glad Telltale didn’t try to force a deep crafting system into its experience just because a certain type of fan might expect it. 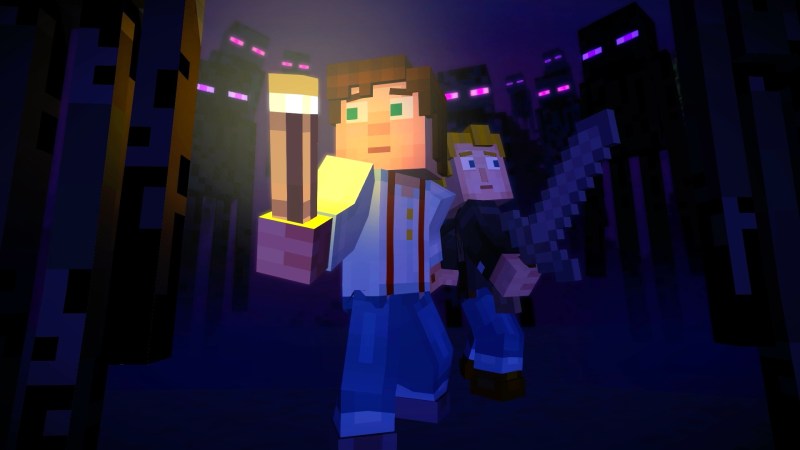 Above: A screenshot from Minecraft Story Mode.

The story and humor skew a bit young

Telltale has a ton of great writers working for it, but it feels like they’re holding back a bit to produce something broad and family friendly here. That makes sense. Minecraft has countless younger fans, but we’ve seen lots of “for children” content in recent years subvert the expectations placed upon it. Nothing here is really going to land to heavily with an adult that doesn’t have a previous connection to Minecraft.

And at the same time, the choices are not as hard as they are in some other Telltale games. I felt like I was picking a lot of the “right” answers, which is a sensation you don’t often feel when playing The Walking Dead or Game of Thrones. I would guess that Telltale feels a need to coddle its Minecraft audience a bit more.

Minecraft: Story Mode will never have the same kind of success that Minecraft does. That’s OK — few things do. But what’s important here is that Telltale gets what makes Minecraft tick and has translated that into something that fits its story-focused mold.

As usual, I want to spend more time with the characters Telltale created for this adventure, which means I’m looking forward to the next episode.