Assassin’s Creed: Syndicate might just win the hearts of fans who feel burned by last fall’s lackluster releases in the stealth-action series.

It offers a number of solutions to problems that plagued Assassin’s Creed: Unity and Assassin’s Creed: Rogue, some bang-up new additions including carriages and a strong playable woman and zip lines, and a wonderful — and huge — setting.

Assassin’s Creed: Syndicate launches tomorrow from Ubisoft and its Quebec studio on PlayStation 4 and Xbox One (reviewed) for $60 and November 19 on PC. A $90 Gold edition includes a Season Pass, and various other editions include physical art and items. Pre-orders get the Darwin & Dickens conspiracy mission, and PS4 players get 10 bonus missions, “The Dreadful Crimes.”

If you were one of the players that felt last fall’s chapters left the series bruised and bleeding, think of Syndicate as being like one of the series’ many assassin heroes, who can recover even when things look bleak. It picks the series up, patches up the worst of its wounds as best it can, and gets back to doing what it knows best. 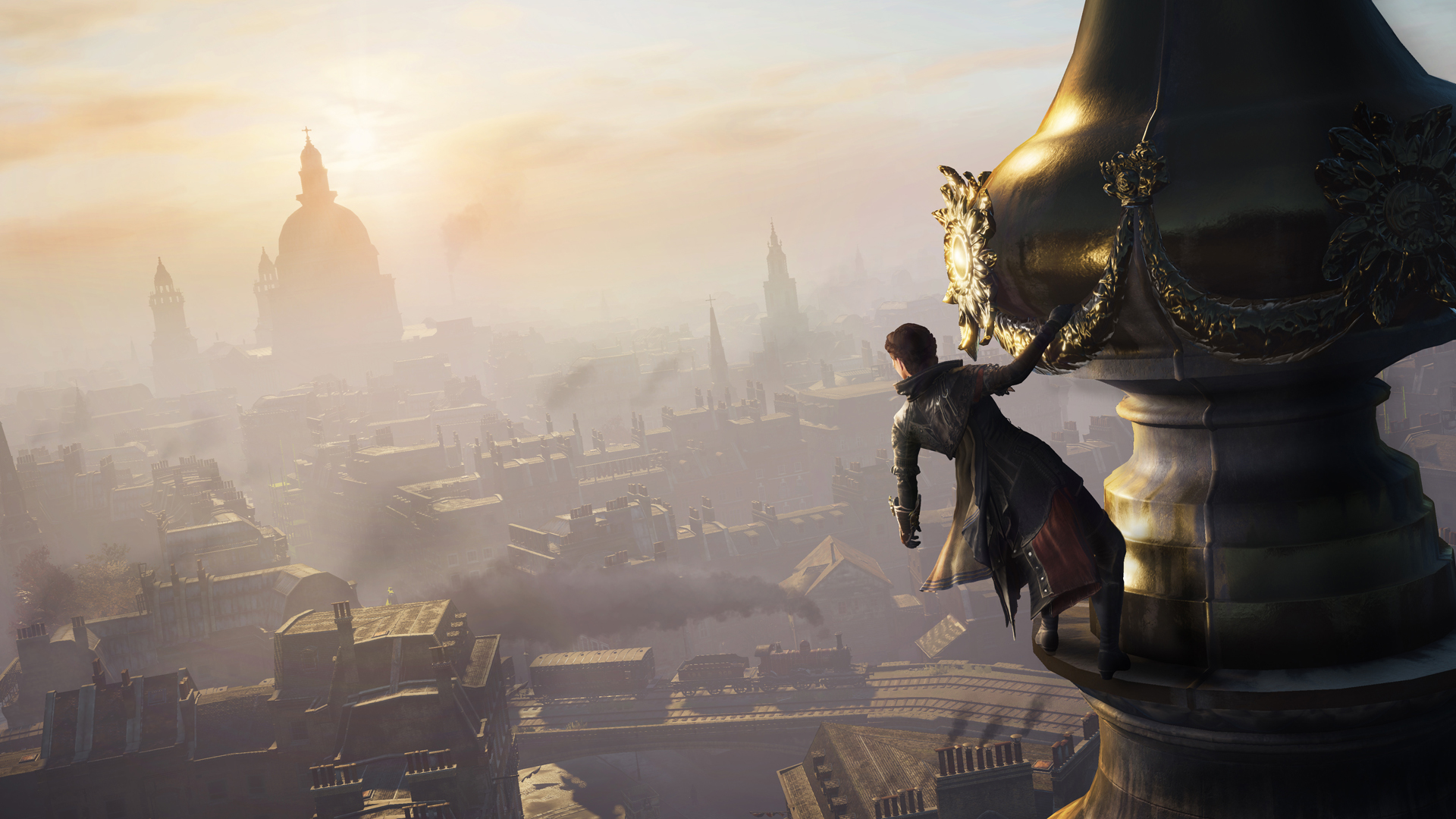 Above: Vistas like this one are everywhere, and they provide the key to fast travel; once you visit selected high spots, you can return via map travel.

Compared to some earlier AC landscapes, Syndicate is huge, and a good amount of side missions fill the neighborhoods. Ubisoft depicts London with a vaguely steampunk Victorian aesthetic, which it follows consistently around the city. The neighborhoods vary in the character of their buildings — warehouses versus gothic churches, and so on — but the people who fill them are largely the same.

The views go on for miles. In a map this large, you have good incentive to get up to those tiny-high-up-needlepoints that assassins always seem to like to perch on. Many of those spots in Syndicate mark spaces where, once visited, you can fast travel to from the map later on.

You also have your own train, which I would have liked to use more to get around. Still, it’s fun watching the city from the train cars, the moving horse-drawn carriages (more on that in a minute) and the boats on the Thames. 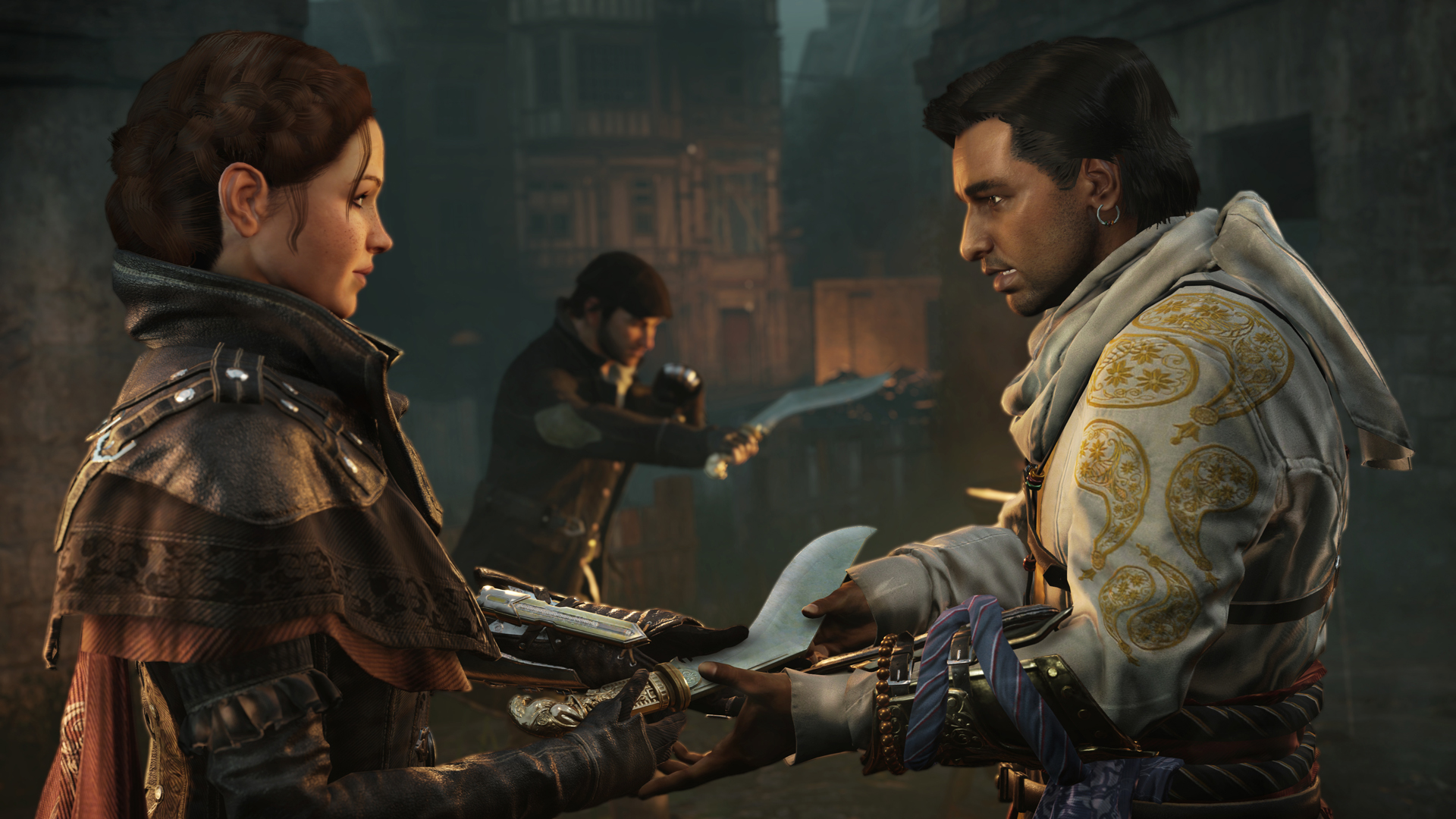 Above: Evie Frye discusses the finer points of weapons with Henry Green.

Those assassins really are twins

Syndicate offers the first playable female character in the series, and she’s fabulous. Jacob and Evie Frye are twins, and while some missions require you to play one or the other, most offer the chance to pick your favorite. And trust me, your favorite is going to be Evie.

The characters function nearly the same. Ubisoft nudges you to consider Evie as a more stealth-oriented character. It reinforces this with her outfits, which give bonus cane-sword damage, and then orients you toward lethality as a stat (since that’s what comes on those swords.) But if you really wanted to, you could just ignore those hints, equip yourself a dandy pair of brass knuckles, take all the fighting talents, and away you go. Jacob and Evie feel nearly the same in combat.

The one place where I noticed a difference between the two characters was when climbing and getting around the city. I don’t know whether it was the particular sequences where I was playing Jacob that just made things slightly more difficult to climb and parkour, or whether Ubisoft gimped him to emphasize the quick, slick movements of his sister — which would seem an odd choice. But all the problems I had in the game with movement and climbing only appeared with Jacob. Evie always moved smoothly, and I ended up relying on her just about every time I had a choice.

She also dresses and acts like an assassin, is tough without being an in-your-face bruiser, and really provides the perfect complement for her hotheaded brother. Evie comes across as likable and competent. After all the complaints Assassin’s Creed has generated in its treatment of female characters (unplayable, helpless, scantily clad, bitchy, and so on), Evie shows how it should have been done all along. 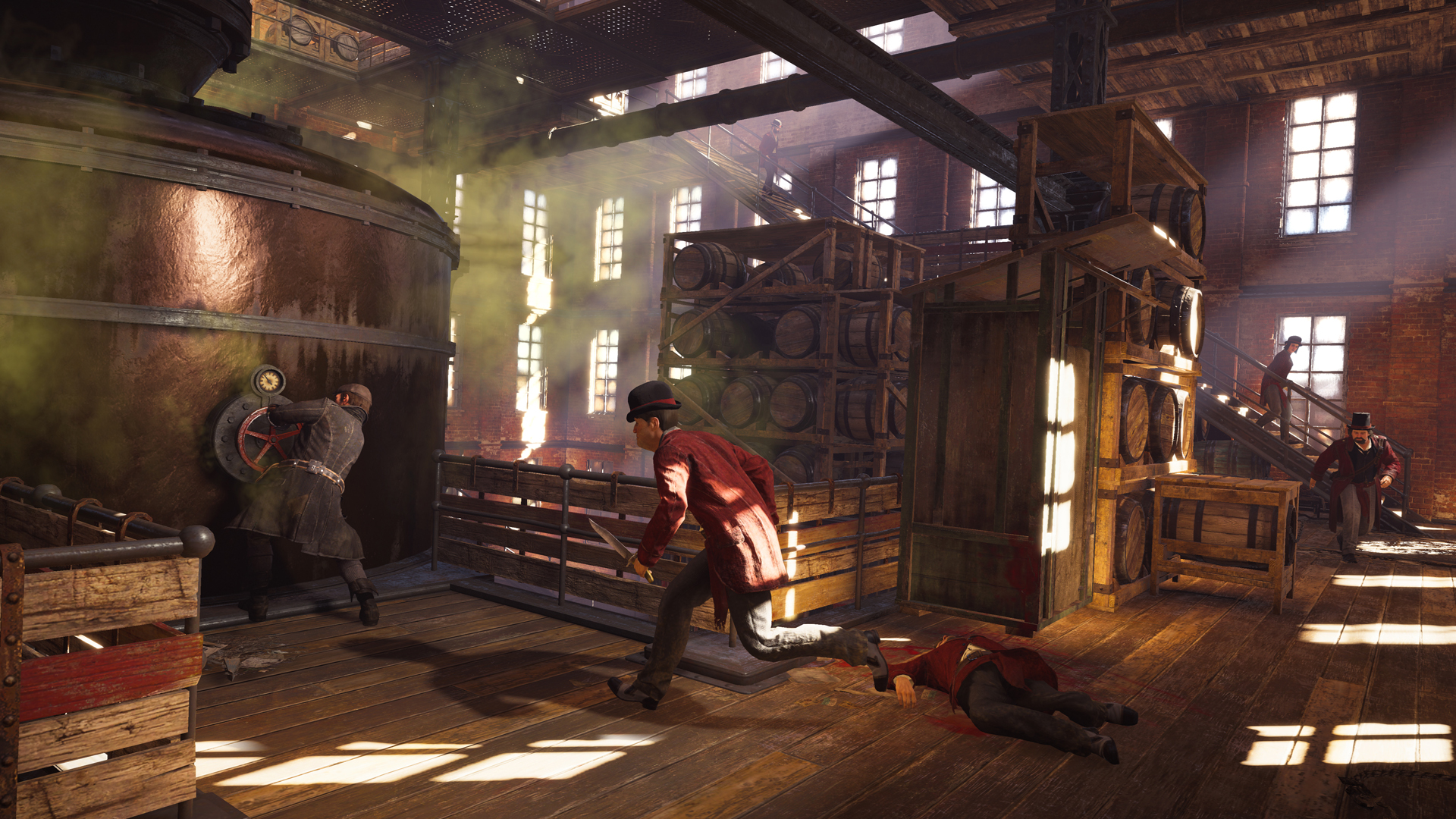 Above: You’d think there were lots of vertical things here for me to climb out of poison gas. You’d be wrong.

Framerates were consistently good throughout my game on the Xbox One, and Ubisoft appears to have resolved many of the issues with bad A.I. and just flat-out bugginess of the last versions. When in combat with multiple enemies, they don’t line up, helpfully waiting to attack you one at a time. I didn’t see many display bugs, and those that showed up were exceptionally minor.

I had none of the issues reported by some others: no crashes, no NPCs floating in air, no wacky glitches. Ubisoft pushed two day-one patches (both under a gigabyte) that you’ll install before playing, which I had during my review tests. All the issues I’ve seen reported were on PS4, which may also have been a factor.

After last fall’s at-launch performance of Unity and Rogue, I was pleasantly surprised by the lack of problems I encountered in Syndicate. Gameplay felt smooth, and cut scenes rendered perfectly.

The only frustrating points in the game where places where Jacob — not Evie, mind you — refused to climb up a wall or structure that clearly was in front of his face and had the handholds he needed. One of my few deaths was from failing to climb a simple metal structure to get out of danger after filling a warehouse with poison gas (oops, my bad.) 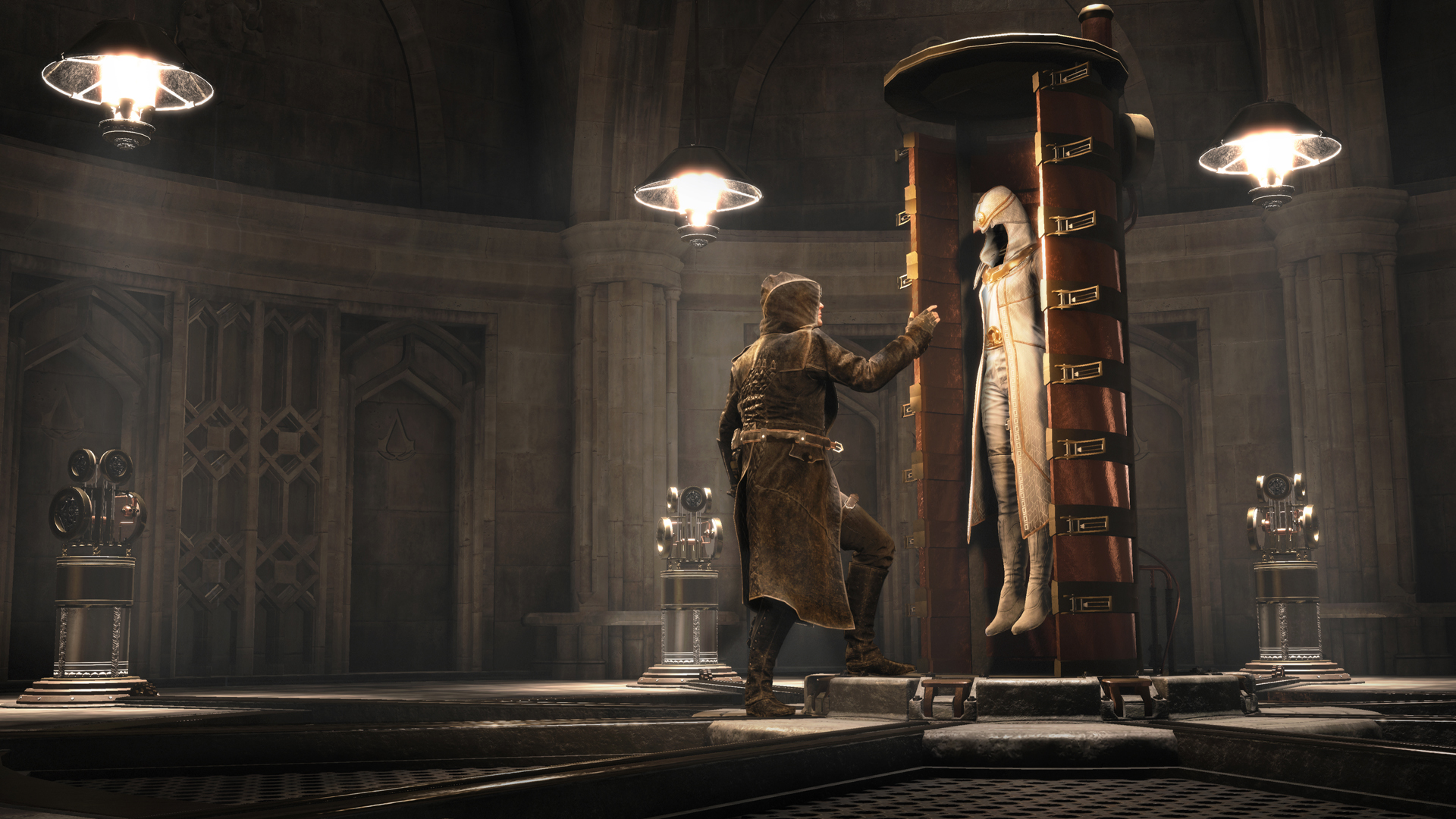 Above: “You look just like an assassin we used to know, who had a lot of cool things, but badass zip lines were not one of them.”

Some streets in Syndicate’s London sprawl, and jumping from house to house would start to look pretty silly. But reaching the end of a building, looking around, and realizing that you have to descend to the street, walk across the cobbles, then climb another building to keep going feels terrible.

Fortunately, you only have to do that for a sequence or so before you obtain the very best accessory you’ll get: your zip line gun.