Disney has the best entertainment brands in the world, and it has been a player in the modern mobile gaming industry for years. But it hasn’t had a ton of success, and its strategy has bounced around.

But more recently, it has had some big hits like Frozen Free Fall, Inside Out, and Star Wars Commander. On top of that, Disney’s Club Penguin game has been well received as it shifted from the web to mobile. At the same time, Disney’s resources to make mobile games are not infinite. Disney recently sunset a hundred mobile games that had reached the end of their commercial lives. Chris Heatherly, senior vice president of Disney Mobile Games, is the one who has to make the calls about which games to pursue, and which to leave behind.

AJ Glasser of Facebook interviewed Heatherly at our recent GamesBeat 2015 conference. Here’s an edited transcript of their conversation. 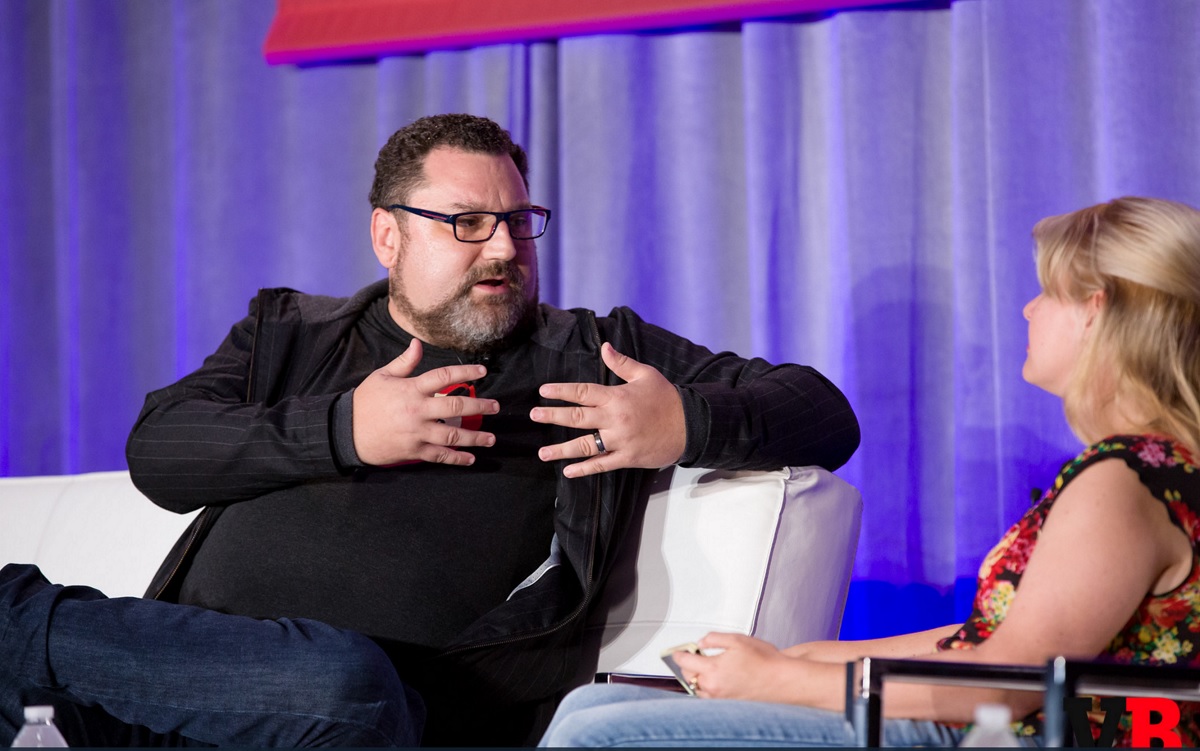 Above: Chris Heatherly of Disney (left) and AJ Glasser of Facebook at GamesBeat 2015.

AJ Glasser: Disney Interactive has had a wild time in mobile gaming, from Where’s My Water to Frozen Free Fall. Can you walk us through the last 12 months?

I’ve been at Disney for 13 years. I love Disney. My team — we were able to sell some of the studios that were focused on original IP, not focused on Disney. The folks we have internally making games now are incredibly passionate about making authentic Disney, Star Wars, Marvel experiences.

The other thing we’ve done is embrace the third-party development community through a model we call co-development. We want to work with the best creators out there. With folks like the Frozen Free Fall studio, Genera, they make the game, develop the game. We collaborate with them on creative. We publish the game and market the game. We leverage our network.

That model’s worked well for us. We had Frozen Free Fall. That was already a top-grossing hit in mobile. We’ve launched two other hits in the past year — Inside Out and Star Wars Commander. If you look at the rest of our portfolio, we have around seven additional titles that are top-grossing games with our various licensed IP.

We’re focused now on building the publishing side of our business, where we’re working with licensees. We’re working with licensees who are either bigger than us, from a publishing perspective, or just have incredible assets and talent we couldn’t get access to otherwise. That strategy of focusing on quality and authenticity, making games that deserve to have the Disney or Star Wars or Marvel name on them, has worked well for us. 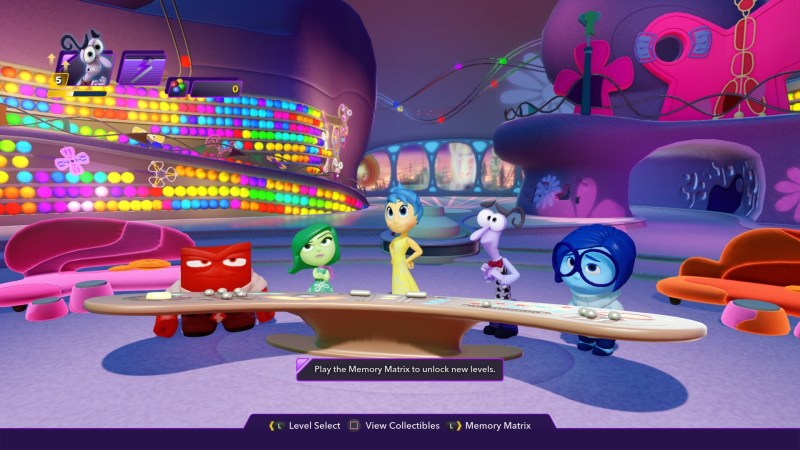 Above: The characters from Inside Out in Disney Infinity 3.0.

Glasser: Your background was actually with the Disney princess franchise, right?

Heatherly: Disney toys, actually, but that was one of my bigger franchises, yes.

Glasser: In going from princesses to more male brands like Star Wars and Marvel, what has that done to your strategy and how you approach the market?

Heatherly: When it comes to games, what Star Wars and Marvel have allowed us to do is go after the mid-core and core audience in a stronger way. Almost everyone in the core gaming space and the console space is very focused on a male demographic. Disney’s in the opposite situation. We’ve always been very strong with kids and families. We’ve been strong with Nintendads. We’ve been strong with moms. But we’ve never really had core gamers. A lot of our properties just don’t lend themselves to that. What we’ve been able to do with Star Wars and Marvel is reach those audiences.

We’re a unique company in that we touch everyone in the family. One thing you’ll see from us in the future is trying to figure out how we do more around the multigenerational component that our IP brings to the party. Star Wars, a big part of its success is that it’s a shared rite of passage between father and son in a lot of ways.

Glasser: Father and daughter too.

Heatherly: Father and daughter too! But we want to make games that play those multigenerational dynamics.

Heatherly: One thing we’ve started to do is, we have multi-IP games that give us the ability to try stuff. If you look at a game like Tsum Tsum, which is not as big in the states but a phenomenon in Japan and Asia, that’s all the Disney characters. In a game like that we can bring characters into it and see how they perform.

With all of the things happening in performance creative, performance marketing, UA the way we’re doing it, BI, and our ability to measure what characters people are playing with, we’re learning all kinds of cool things. Have you seen Inside Out? 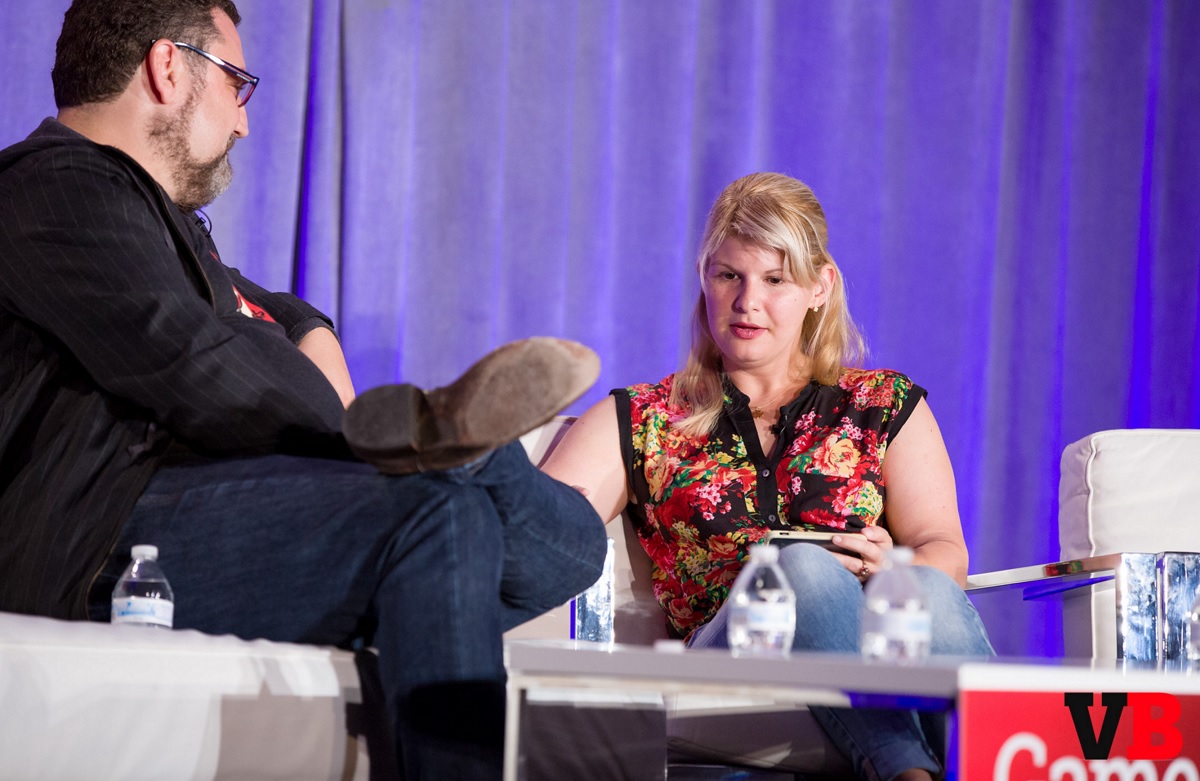 Above: Chris Heatherly of Disney (left) and AJ Glasser of Facebook at GamesBeat 2015.

Glasser: Is it Sadness?

Glasser: I have a theory behind that. Inside Out was targeted toward people going toward a point in life where they were maturing. It was a movie that spoke to children as if they were going to grow into adults.

Heatherly: Right. And she’s the character that transforms the most in the film. She’s the hero in a lot of ways. But we’re starting to create vehicles where we can test things like that and learn and use those insights to drive other games.

Glasser: That’s how you tell that they’re ready. How do you tell when it’s time to sunset a game?

Heatherly: One thing we’re starting to do is create a model for sustaining games when they reach a point where you can’t live-op them in the traditional way. We’ve set up a team to do that. But we look at the audience and say, “Are people still playing this game? Is there a significant community around this? Can we support ongoing content development? Can we do a good job?”

There are times where it might make financial sense to continue to run the game, but you can’t do a good job of maintaining the brand experience. At that point we would rather sunset the game than let the audience down. But we’re trying to get better at figuring out how we can run these games on the long tail, where we provide a satisfying experience and continue to update content, but maybe don’t do new features. We do it with a pure sustainment team.