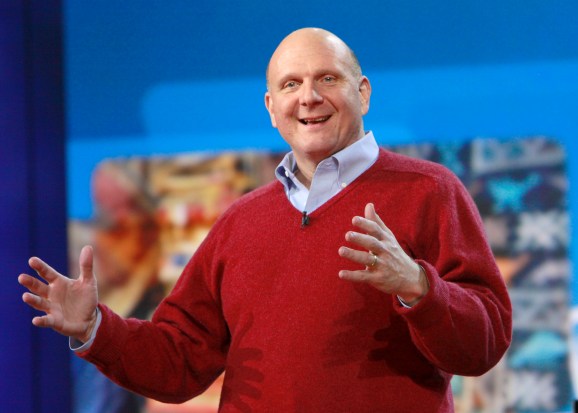 Steve Ballmer may no longer be CEO at Microsoft, but his love for the company he led for 14 years lives on. Indeed, after being in the news just last week for revealing he owns 4 percent of Twitter, Ballmer is now making headlines for his comments regarding Amazon and Apple.

Amazon has been under fire this year for its work culture — this month it even hit back with an angry rebuttal. In an interview with Bloomberg, Ballmer was asked about his thoughts on Amazon CEO Jeff Bezos’ comment that Microsoft was like “a country club.”

“Microsoft’s culture is very strong. Hard-driving, people are really focused on changing the world, people work very hard. I believe the same is true at Amazon. But you have to remember there is intense competition between Microsoft and Amazon, both AWS and Microsoft’s Azure just in the city of Seattle over talent. I think they are a place that people don’t want to work. Anybody who ever left Microsoft, we could count on them coming back within a year or two. It’s just not a great place to do innovative stuff as an engineer.”

Ballmer clarified that this didn’t apply to everybody, but that many, many people took “a round trip.” He added some context, pointing out that Seattle isn’t Silicon Valley, where tech employees are constantly switching between the thousands of startups and hundreds of bigger firms. In Seattle, there are fewer startups, and just two major tech firms: Amazon and Microsoft.

The interview then turned to Apple. First, Ballmer praised the company.

“They’ve done a great a job. I think if you go back to ’97 when Steve came back, when they were almost bankrupt, we made an investment in Apple as part of settling a lawsuit. We, Microsoft, made an investment. In a way you could say that might have been one of the craziest things we ever did. But they’ve taken the foundation of great innovation, some cash, and they’ve turned it into the most valuable company in the world.”

Notice that Ballmer still speaks as if he works at Microsoft. Also notable is that he didn’t have anything negative to say about Apple, which is still relatively new for him.

“Microsoft will give them a good run for their money. Nobody else is really trying to compete with them anymore, really seriously in hardware. Who is really going after the Mac, who is really going after the iPad. You could basically say Microsoft and Samsung. And Microsoft really is the only one that’s got a software and hardware capability. So if there’s going to be any competition at all for Apple, it’ll come from Microsoft. And I believe in that.”

Ballmer has long talked about Microsoft’s hardware and software strengths, especially after the Nokia acquisition he helped orchestrate. And with the growing Surface lineup, he’s unsurprisingly more bullish.

“A Surface Book is not either an iMac or an iPad, but it’s a new category. It’s an innovative category. And the truth of the matter is, who is going to get to those categories first? Microsoft or Apple.”

Ballmer also said he didn’t know if Apple would get into cars, saluted Tesla, and said he loves Uber.

Tying the story back to his recent investment, in a separate Bloomberg interview, Ballmer said he believes Twitter “has all kinds of opportunity.”