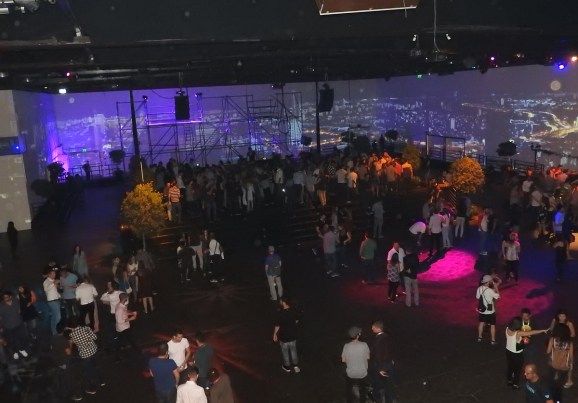 TEL AVIV — Israel’s 200 game companies are expected to generate $1 billion in mobile and social gaming revenue in 2015, up 25 percent from $800 million a year earlier, according to a market analysis by Playtika, Israel’s largest game company and the biggest social casino game maker in the world.

That’s a great result for a young industry in a region that had no obvious reason to grow a game industry, and it explains why the Casual Connect game show was held in Israel for the first time last week in the place that calls itself the “Startup Nation.” The event drew more than 1,800 registered attendees, or twice as many as originally expected.

“For me, this conference is something we worked to get for many years,” said Robert Antokol, chief executive of Playtika, in a fireside chat with me at the start of the conference. “I hope that people will hear about this, and it will become a tradition.”

But success in gaming is a fragile and fleeting thing, and Israel still needs more progress to become a permanent player in the Darwinian game market. The Israeli presence in gaming is a good example of how a region can become an economic powerhouse in one industry in a very short time by capitalizing on the changes that technology brings.

For a small country of 8 million people, Israel has an disproportionate share of the world’s $91 billion game industry. It reminds me of Finland, which, thanks to Angry Birds maker Rovio and Clash of Clans maker Supercell, has a couple of thousand game jobs and dozens of companies that generated well beyond $1 billion in revenues in 2015. Israel also has thousands of game jobs, if you add up the numbers from game developers, publishers, real-money gambling companies, and related marketing technology companies. 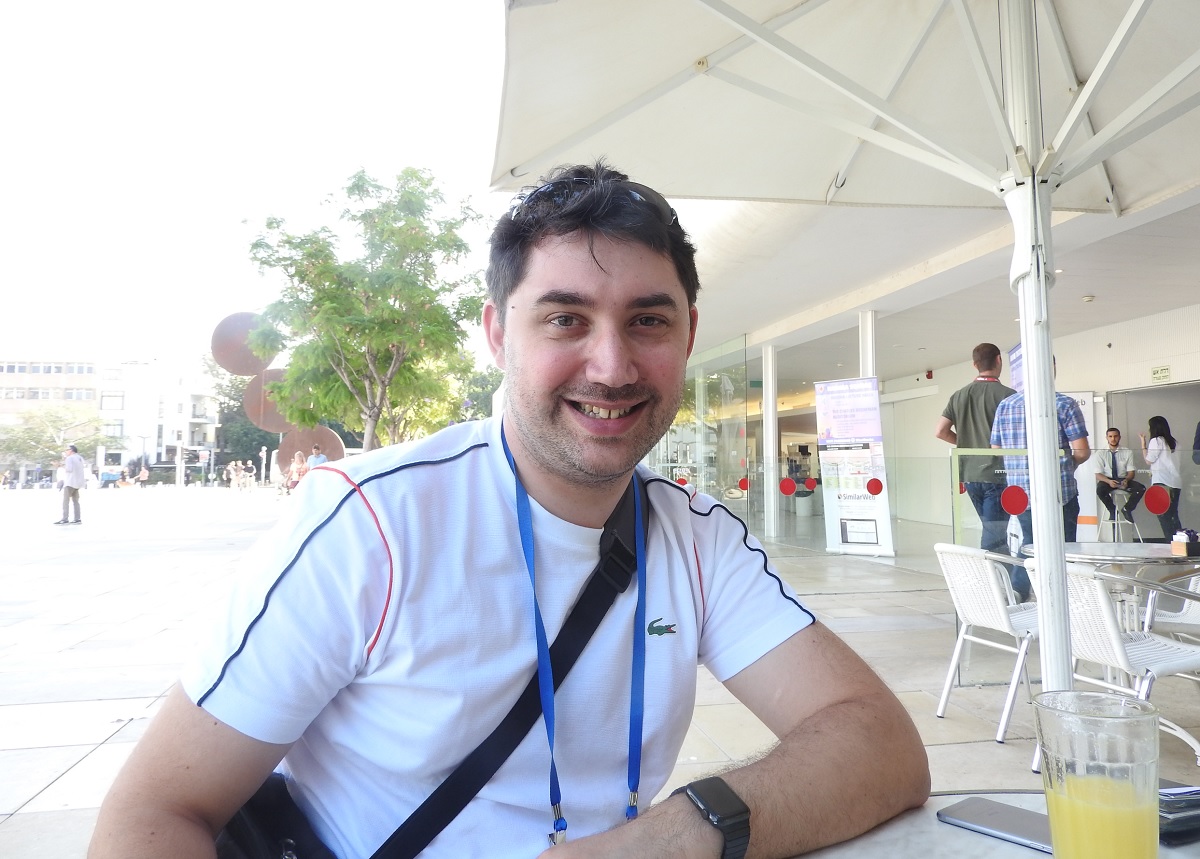 Its prospects are good because it has already had so much success in other tech industries, said Jeremie Kletzkine, vice president of business development at Start-up Nation Central, an economic development group, in an interview. Israel has developed fundamental and broad technologies in cleantech, healthcare, software, the Internet, life sciences, big data, the military, hardware, and cyber security. Israel has 5,000 startups, or the highest concentration of startups in the world, Kletzkine said.

“If you compared us to Silicon Valley, it is very different,” he said. “Silicon Valley is about execution. Israel starts with technology, and then it finds something to do with it. Israel is very far from the end markets, and it needs partnerships to find uses for the technology. Israelis are not into connecting dots. They create new dots.”

A good example is how Israel’s PrimeSense and other Israeli companies created the sensor technology, born from the Israeli military, for sensing body motions. PrimeSense teamed up with Microsoft to create the Kinect motion-sensing system for the Xbox 360 game console. Apple eventually acquired it and turned PrimeSense it into a hub for research and development in Israel. 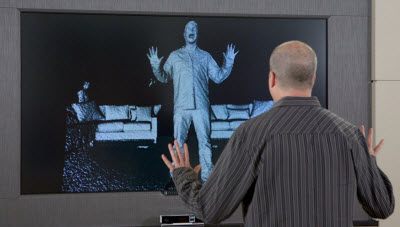 Israel has had some luck in content, not just technology, thanks to its background in social casino games. In that sector alone, Israeli entrepreneurs have had more than $600 million in exits, according to market researcher Eilers Research. Those entrepreneurs can reinvest that money in Israeli startups. About 20 game companies are sizable, according to Tsahi Liberman, board member at Israel’s game industry group, GameIS, in an interview.

The Israeli industry owes its roots to 1990s online gambling companies such as 888 Holdings, Playtech, and Empire Online, said Michael Rosen, founder and CEO of Tacticsoft, a maker of midcore games, or hardcore titles that can be played in short sessions on mobile devices. Those online gambling companies weren’t game companies, but they had to conquer problems such as user acquisition, monetization, and targeted marketing, Rosen said.

In the mid-2000s, Israelis joined the rush to capitalize on the growth of social gaming on Facebook and mobile games on the iPhone. Antokol credits Zynga for turning the casino games world upside down in 2008 with Zynga Poker, a non-gambling game where you could pay to buy virtual poker chips but you could not cash out your winnings.

Antokol cofounded Playtika with Uri Shahak in 2010, launching the social casino slots game Slotomania. It took them a long eight months to raise money because nobody really believed that people would play casino games where they couldn’t win cash. But Playtika added value by making it easy to play casino games on modern platforms, making them social, and incorporating free-to-play game mechanics that eventually helped fuel growth to 20 million monthly active users.

Antokol and Shahak sold the company at a valuation of $150 million to Caesars Interactive Entertainment, the digital gaming division of the land-based casino behemoth Caesars, in 2011. That triggered the craze around social casino games and led to the formation of a whole social casino gaming sector in Israel. Hundreds of social casino startups were formed, but through swift development and acquisitions, Playtika rose to the top of a market that became a $3.4 billion sector by 2015.

The growth of social casino games also helped the country’s entrepreneurs form ad tech companies like Matomy, which in turn helped the game companies acquire users and monetize them. Those companies, like ClicksMob and Appsflyer, help Israeli game companies reach the right users. 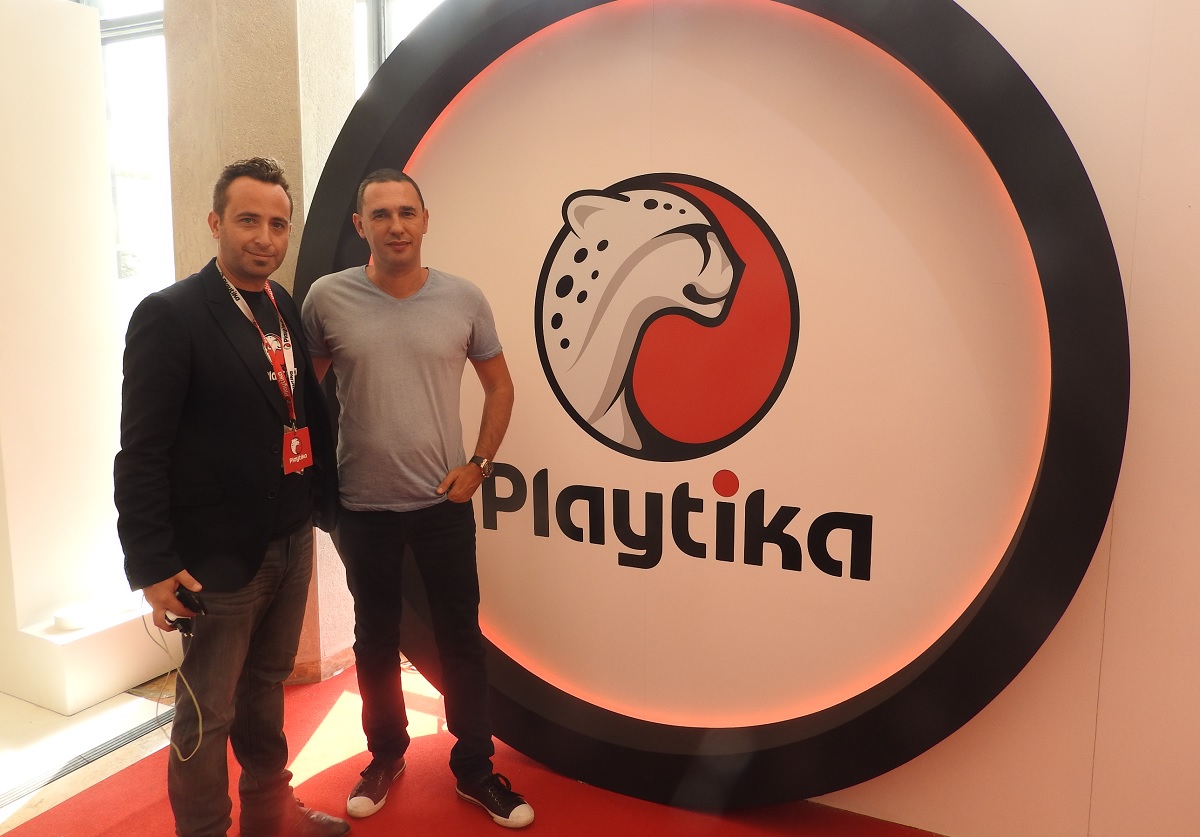 Above: Elad Kushnir (left) and Robert Antokol of Playtika.

Meanwhile, entrepreneurs such as Sagi Schliesser created child education game companies like Tab Tale, which has nearly 300 employees. Now, Israel has strength in sectors such as real-money gambling, social casino games, marketing technology, and education. There are also a few makers of mid-core games, or hardcore games with short play sessions that are ideal for mobile players, such as Plarium.

Adi Hanin, business development manager at Playtika, said in a talk that Israel has advantages such as nine universities and a high-tech military that produce a lot of coders. That led to many tech spinoffs and large research campuses for big companies such as Intel. That produces a lot of tech talent for the startups. Israel also has 100 venture capitalists who have gathered a lot of funding from previous successes, and some of those VCs are willing to fund game companies. Israel gets more venture capital per capita than any country in the world, Kletzkine said.

In contrast to Finland, Israel’s government doesn’t invest in game or tech companies. But it does give tax breaks to foreign tech companies expanding in Israel, helping to create or bring more talent to the country. Israel has about 30 incubators, and another 30 accelerators.

Even without the government funding, Israel has become a “startup nation,” because it has to do that to survive. It doesn’t have natural resources, big finance companies, or other obvious sources of jobs. High-tech, and subsequently games, was the obvious path. In that way, Israel is similar to Berlin, which had none of the large German corporations within its borders. As a result, Berlin has become a startup hub of Europe.

In a similar way, necessity created a tech and game boom in Israel, Rosen said. With nothing obvious to manufacture or trade, Israel has to be inventive. Tel Aviv has a bunch of skyscrapers that weren’t here 15 years ago, and a bunch are under construction. They are there because Israelis have learned how to balance opportunities and risks, Rosen said.

“Israel’s culture is to do the maximum with the minimum,” Rosen said, who has been making games in Israel for more than a decade and employs 12 people at his game studio. 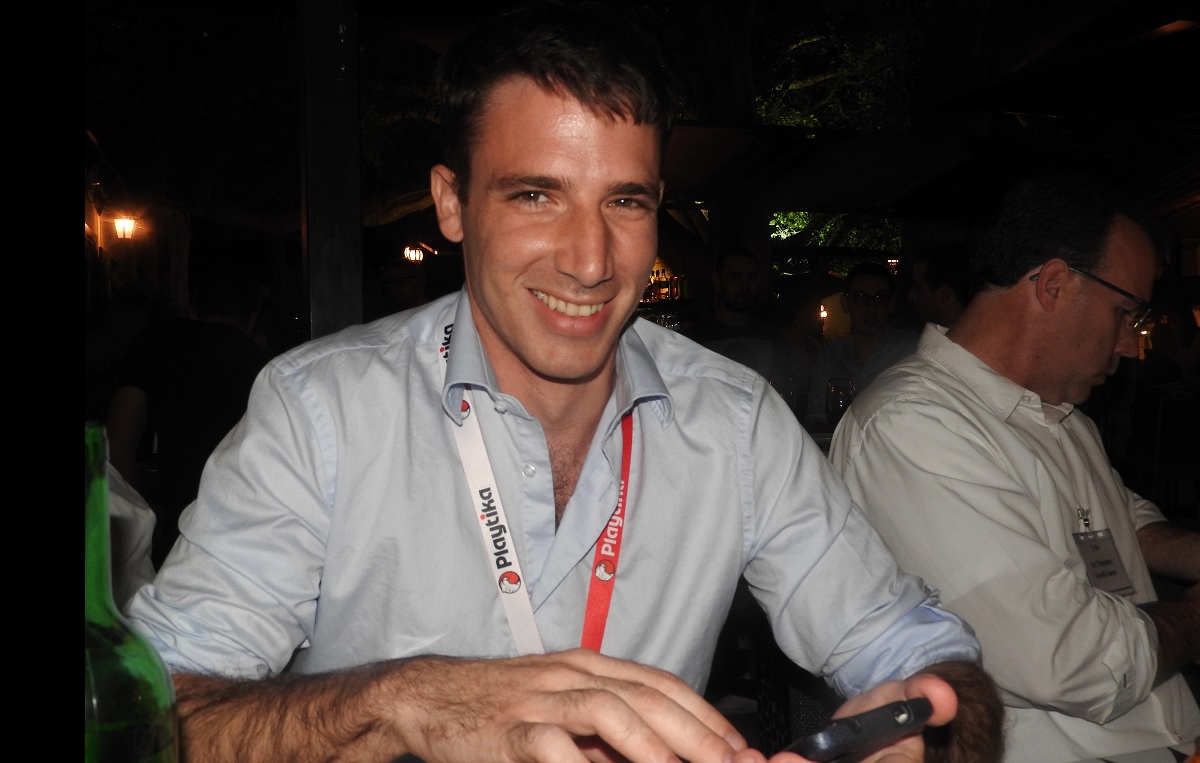 Above: Michael Rosen, CEO of Tacticsoft

Rosen and others like Nir Miretzky, chairman of GameIS, are trying to make sure that the Israeli game companies keep their eyes on the larger prize. Instead of competing against each other, they’re organizing game development groups and game jams to ensure that the developers teach each other how to become successful on a global scale.

“There’s room for everyone,” Rosen said.

There are plenty of risks that Israel’s game companies have yet to overcome. Mobile gaming market share is starting to concentrate in the top companies, leaving little for the smaller companies. While mobile gaming is expected to hit $30 billion, many of the smaller companies may fall victim to an “indiepocalypse,” or a predicted collapse due to problems in mobile such as high user acquisition costs.

In part because of these fears, a lot of venture capitalists have pulled back from games, or they make a single game investment to reduce their exposure to being wrong, said Gigi Levy-Weiss, head of the NFX Guild accelerator and an early investor in Playtika and Plarium. Levy-Weiss has backed a dozen game companies in Israel.

Digi-Capital, a tech advisory firm, said this week that game deals have dropped dramatically this year. In the first nine months of the year, mergers and acquisitions (and initial public offerings) are down 82 percent from a year ago, and game investments are 35 percent below a year ago. IPOs evaporated. By comparison, Israelis could get much richer if they eschewed games in favor of other tech companies. In 2014, Israeli tech companies had $15 billion worth of IPOs and other exits.

And while Israel has become a world leader in social casino games, it still needs more creative talent. Hardcore console games companies are nonexistent in the Israeli market. A handful of midcore and hardcore game companies, such as Rosen’s Tacticsoft and Plarium, have sprouted in Israel. But there’s a risk that Israel is overly dependent on a few narrow game industry categories. 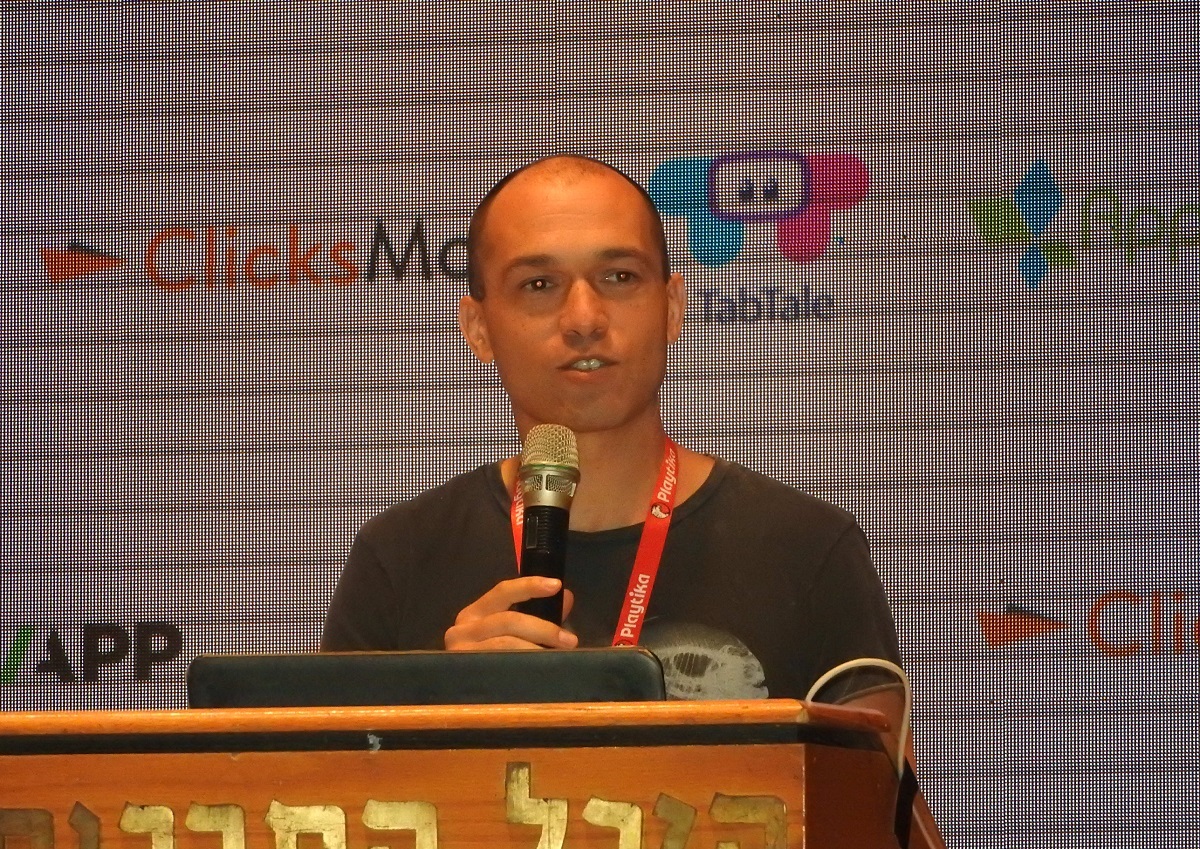 Above: Gigi Levy-Weiss, head of NFX Guild and an investor in game companies.

There’s debate on whether Triple-A games such as those made by the console makers will be developed by Israeli companies. Gabi Shalel, chief marketing officer at Plarium, thinks it’s going to be quite a while before that happens. His company uses analytics and performance marketing to target consumers and adapt its games to make them happy, but it doesn’t quite yet have the creative muscle and budget to create high-end console-like games on mobile.

On the other hand, Triple-A quality games will eventually come to Israel, in the form of better PC online, console, or mobile games, Levy-Weiss said. One way that can happen will be with the retrieval of really good production managers through reverse immigration. Younger game designers will head overseas, learn how to make games, return home, and then manage projects in Israel. That’s going to take time, but it’s been proven in other parts of the tech industry, said Liberman.

“We don’t have the ecosystem for Triple-A,” Rosen said. “It’s going to take a lot of years for that. No one will give you a budget for a hundred million euros if you haven’t done it before.”

Perhaps the biggest obstacle for gaming’s growth is geopolitics. More than 250,000 people have died in the civil war in neighboring Syria. The violence in Jerusalem in recent weeks dampened attendance of the conference, and it was a grim reminder of how hard it is to survive in the Middle East.

But games could be an answer there too. Bandura Games is making a title that encourages friendship across conflict zones by rewarding cooperation.

Justin Hefter, CEO of Bandura and an American Jew, Israeli entrepreneur Etay Furman, and Palestinian teacher Ammoun Dissi stood together on a stage to encourage world peace through games. They elicited warm applause and even tears from people in the audience who want an end to generations of violence.

“I think that games are the only way to have peace,” Rosen said. “When you put two people together who are indoctrinated by nationality, they will never be able to speak. But once you get them playing Monopoly, they are the best of friends.” 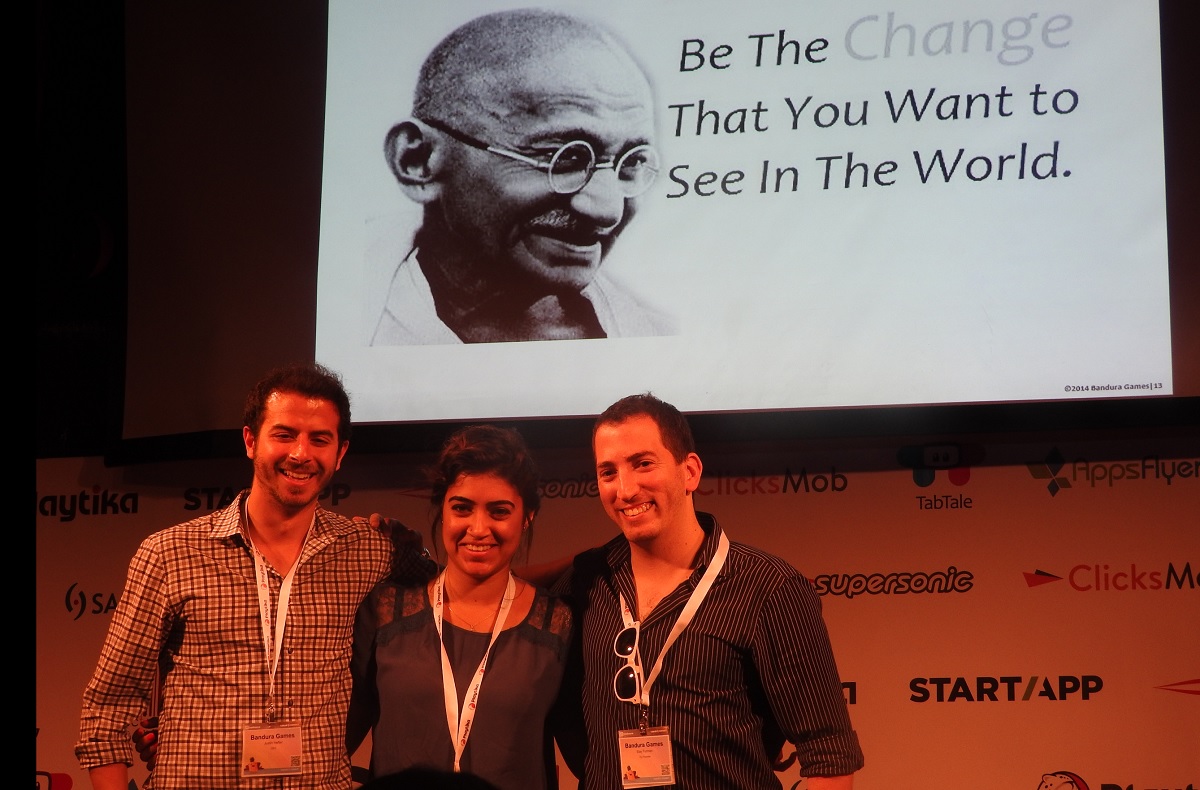