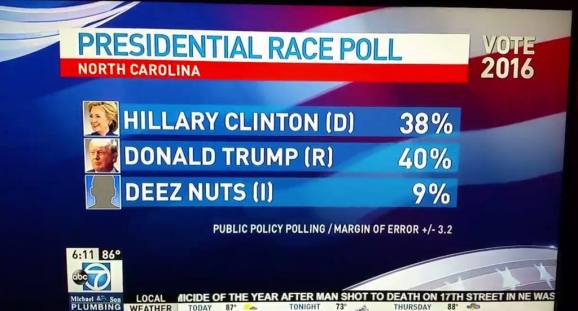 Fake U.S. presidential candidates have been pouring into the Federal Election Commission database ever since Deez Nuts showed up.

Brady Olson, a 15-year-old from Wallingford, Iowa, made headlines this summer when he registered as Deez Nuts and started popping up in legitimate polls. But Deez Nuts has shrunk in popularity lately, leaving the field open for plenty of other joke candidates who are willing to file the paperwork — and I’m not referring to Chris Christie or Lindsey Graham.

Currently, there are about 1,300 names on file with the FEC. Many of them are “serious” candidates who, despite having zero chance in our outmoded and rigged system, probably have genuine political intentions — but not all of them!

FEC regulations state that a candidate can only file a Form 2 within 15 days of either spending of receiving more than $5,000. The thing is, you can just apply anyway.

That little fact has turned the FEC’s serious government information portal into a virtual bathroom stall, allowing vandals and eccentrics to submit whatever they please.

The form is so mundane, you might not even notice a candidate’s name: 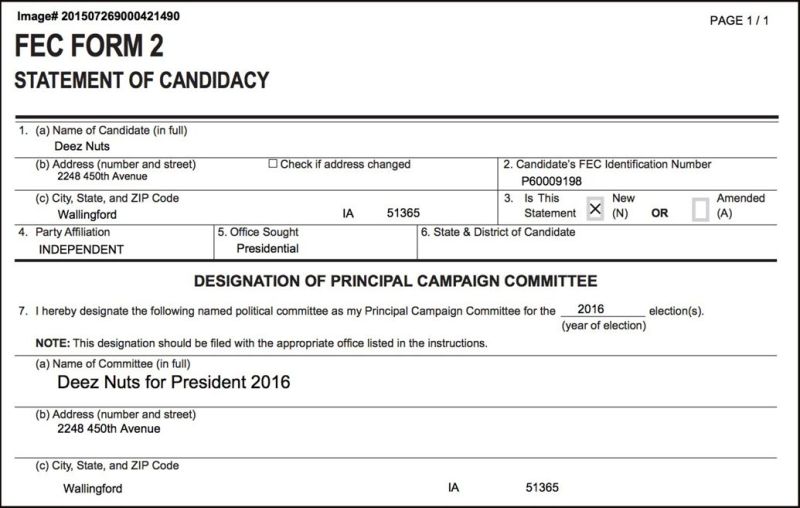 And, thanks to the trail blazed by Deez Nuts, the weirdos are lining up.

Here are some of the “people” currently running for president:

The real Taylor Swift probably has a legitimate shot at the popular vote, honestly. Maybe she should consider it.

Click here for the ever-growing list of candidates. Feel free to dig up your own, but there won’t be a funnier joke candidate than Bobby Jindal.