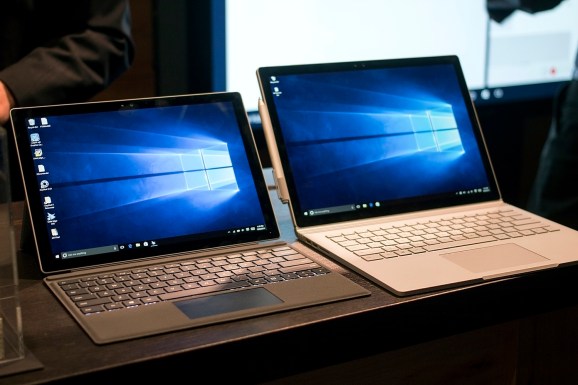 Right on schedule and just in time for the opening of its flagship store in New York, Microsoft has started selling its new Surface Pro 4 and Surface Book in the U.S. and Canada. Microsoft has also updated the firmware for both, to add Windows Hello support.

Microsoft describes Windows Hello as “biometric authentication which can provide instant access to your Windows 10 devices.” As long as you have the correct hardware, the feature means being able to log in and authenticate with your finger, iris, or face, rather than using a password.

The firmware update that adds Windows Hello is available now for both the Surface Pro 4 and Surface Book. Here’s the update’s description:

Cumulative and current firmware and drivers for the Surface Pro 4 / Surface Book. This firmware and driver package contains drivers for all of the components in the Surface Pro 4 / Surface Book, as well as updates to the system firmware that have been released via Windows Update. These drivers and firmware are compatible with Windows 10, including Enterprise versions. The driver MSI and ZIP files include all of the drivers and firmware needed to deploy custom images of Windows on your Surface devices. For convenience, the Ethernet dongle drivers are included as separate packages, but are also included in the ZIP and MSI. Additionally, the WinTab driver is provided for those professionals needing WinTab compatibility with certain Surface Pen enabled applications.

Although Windows Hello isn’t mentioned explicitly, AnandTech confirmed that the feature was indeed added with this firmware update. The timing makes sense, given that Microsoft promised Windows Hello would be included in time for the launch of both devices.

The Surface lineup is becoming increasingly critical to Microsoft’s PC strategy, particularly in the enterprise space. With an iterative update (Surface Pro 4) and a whole new product (Surface Book) becoming available at the same time, you can expect the company to see new revenue milestones for this segment of its business.