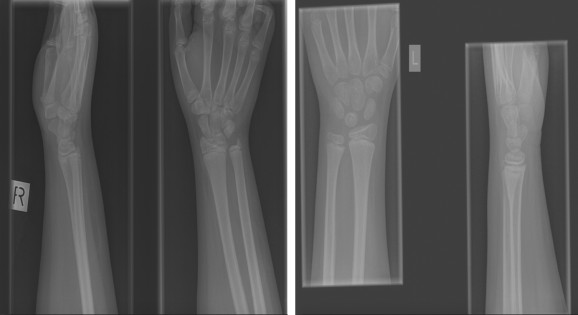 On the left, something that is not a fracture, but the radiologist incorrectly said was. "It's something called a 'multi-segment growth plate,' which a lot of radiologists aren't familiar with," Enlitic's Jeremy Howard says. On the right, a fracture that a radiologist couldn't find but Enlitic could.

Enlitic, a startup using a type of artificial intelligence called deep learning to help radiologists do a better job of understanding medical images, is announcing today a $10 million round of funding. The money comes from Capitol Health Limited, a publicly traded company that provides diagnostic imaging services in clinics across Australia.

As a result of the deal, Capitol Health will draw on Enlitic’s technology to improve the efficiency of radiologists. And that’s critical for Capitol Health, which wants to increase its profit margin as it expands into Asia. Capitol Health is giving Enlitic valuable medical images, and the company’s radiologists will collaborate with Enlitic’s software engineers. Not that Enlitic wants to replace those radiologists.

“What we’re doing is providing radiologists with tools to make them better,” Enlitic founder and chief executive Jeremy Howard told VentureBeat in an interview. The startup’s software can do several things that can save time for radiologists, including surfacing relevant earlier studies, making measurements, highlighting key areas in images, and showing cases from patients with similar conditions.

Enlitic hasn’t yet begun to generate revenue, Howard said. Nevertheless, it’s clear the space is heating up. IBM in August announced in a press release that it had acquired Merge Healthcare for $1 billion in order to give its Watson cognitive computing system “the ability to ‘see.'”

Radiologists don’t always take to the idea that machines can be useful because longstanding technology called computer-aided detection (CAD) has such a poor reputation. The model, which can pick up on spots in images such as mammograms, often comes up with false positives, Howard said. “They’re used to this idea that computers are these really dumb instruments,” he said of radiologists. So Enlitic will have to navigate around that obstacle.

Enlitic started last year and is based in San Francisco. Around 15 people work for the startup; the headcount should double over the next year. To date Enlitic has raised $15 million, including the $2 million seed round announced last year.