The original Deus Ex holds a place of honor among games.

Back in 2000, it was an early example of the narrative shooter genre, something was more concerned with storytelling and character development than with action. There was still plenty of action to be had in Deus Ex, for players who chose to build their character around combat, but the design allowed them to use stealth, hacking, or diplomacy to resolve situations too. The 2011 prequel Deus Ex: Human Revolution used these core principles, but it also introduced players to a new protagonist, Adam Jensen. That star returns in 2016 with Deus Ex: Mankind Divided.

GamesBeat spoke with game designer Antoine Tisdale about what the future holds for Jensen and how Mankind Divided (which arrives February 23 for PlayStation 4, Xbox One, and PC) will honor its ancestry.

Not the new guy anymore

The first Deus Ex starred J.C. Denton, a cybernetic agent who lived in a futuristic world where every conspiracy theory from the 20th century turned out to be true — especially the ones that had been debunked. When Adam Jensen arrived in Human Revolution, he was “The New Guy.” And he wasn’t just the new protagonist of the new game — Jensen himself was fresh to his role as a cyborg super-agent. The first level had players control Jensen as an ordinary human, and it was only after he nearly died and was rebuilt that they got to see the world through his new cybernetically augmented eyes.

Mankind Divided takes place after the end of Human Revolution. Tisdale explains the crucial backstory and events that occurred between the games. “At the end of Human Revolution, nearly everybody who had augmentations went crazy and killed their friends, family,” Tisdale said. “Two years later, whoever survived this are scared shitless of augmented people. This is what we call ‘Mechanical Apartheid’ — almost a global unified response by regular humans, nonaugmented people, to segregate and distance themselves from the augmented population.” 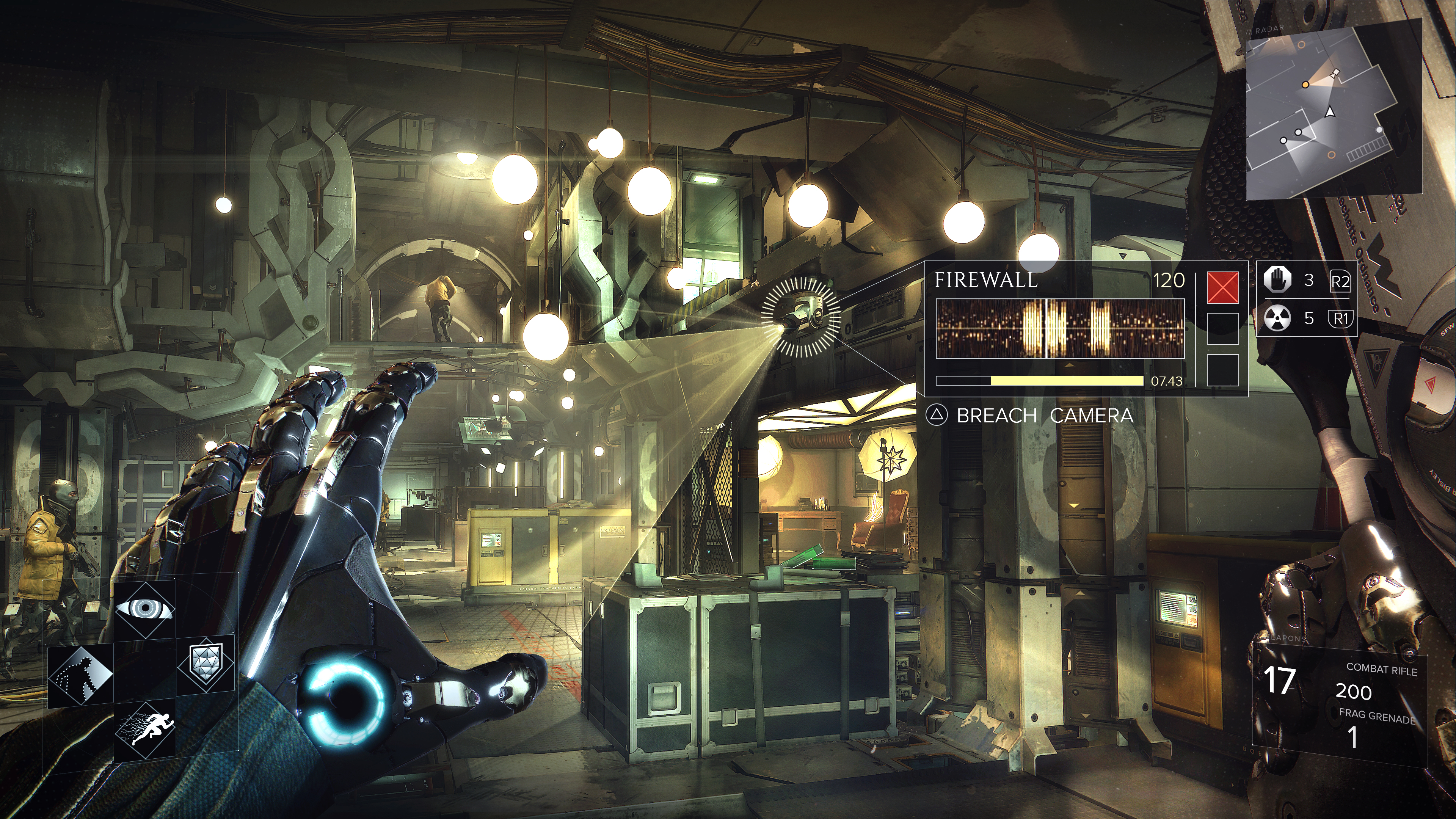 Above: You’re on candid camera!

This story parallels innumerable real-world humanitarian crises. “It’s one of those things that happens in real life, and Deus Ex as a franchise has always been far-seeing into what could happen socially, politically,” Tisdale said. “And this is one of those aspects that we see in the world right now. It’s really important to tell this story and this is the way we’re doing it.”

Jensen is one of the few augmented people who did not go crazy during the “Aug Incident,” and by the beginning of Mankind Divided he is the only aug on an international task force called TF 29. At the start, Jensen will already have many of the powerful augmentations that were unlocked over the course of the previous game. Save files don’t carry over, but he does begin with a roster of familiar superpowers. He can use the “Icarus” parachute power that allows him to drop from great heights, and he has the X-ray vision augmentation, along with several new powers.

We saw a new gameplay video that showed Jensen using an augmentation that let him quickly dash forwards, and this could also be used to jump long distances and reach high places. He could also stun small groups of enemies with a lightning attack, and had another new power that the developers compared to a “Superman Punch” that clobbered enemies with one hit.

“It’s important to introduce Jensen as an agent, not as a dude that just got on with this.” says Tisdale. “You are the augmented agent that you know from Human Revolution if you played that game.”

The original Deus Ex allowed players to use different kinds of ammunition in their guns. The shotgun could fire buckshot for close range attacks, but it also had armor-piercing “Sabot Rounds” for taking down robots. It ensured that weapons had multiple tactical uses. Mankind Divided brings back the various ammo types “We’re upping the ante a little bit with combat… Armor piercing is one, EMP bullets is another, and regular ammunition for your weapon. Not all weapons will have all types of ammunition. It’s more like certain weapons have specialties. The ammo types are a bit of a wink to the original game, at the same time they serve as a really good tool to create a more interesting experience for the player.”

A significant addition to the mechanics is Jensen’s new “Gun Arms.” Jensen’s arms are prosthetic, and in Human Revolution, he had retractable “Nano-ceramic Blades” in his forearms that worked for quick kills if he got within melee range. In Mankind Divided, he can equip other offensive augmentations in his arms. These gun arms are powerful, but they use rare ammunition or have long recharge times. They are always at hand, and you can use them in addition to whatever weapon Jensen is holding.

“One of the critiques we had for Human Revolution is that the combat was kind of slow and it was hard to react quickly. So the gun arms [were] one way to use a more offensive augmentation, instead of defensive,” Tisdale said. “Instead of having to switch to it, equip it, and plan for it, it is more of a reaction. You want augmentations to be reactive to the environment and what’s going on around you.”

Tisdale says the gun arms will have a similar feel to the devastating Typhoon aug from Human Revolution, which could only be used sparingly but was extremely effective in certain situations. “[Gun arms are] convenient when you’re running low on ammo, or don’t know what weapon to use, or maybe you don’t have a weapon anymore. You can just whip one out and shoot something very quickly.”

The gun arms will also serve the core principles of the Deus Ex franchise by allowing stealthy and nonlethal combat if that’s what the player chooses to do. “Whether you want to play stealth or not, or if you don’t want to kill anyone, or if you don’t mind if NPCs die around you. You have a gun arm for that.”