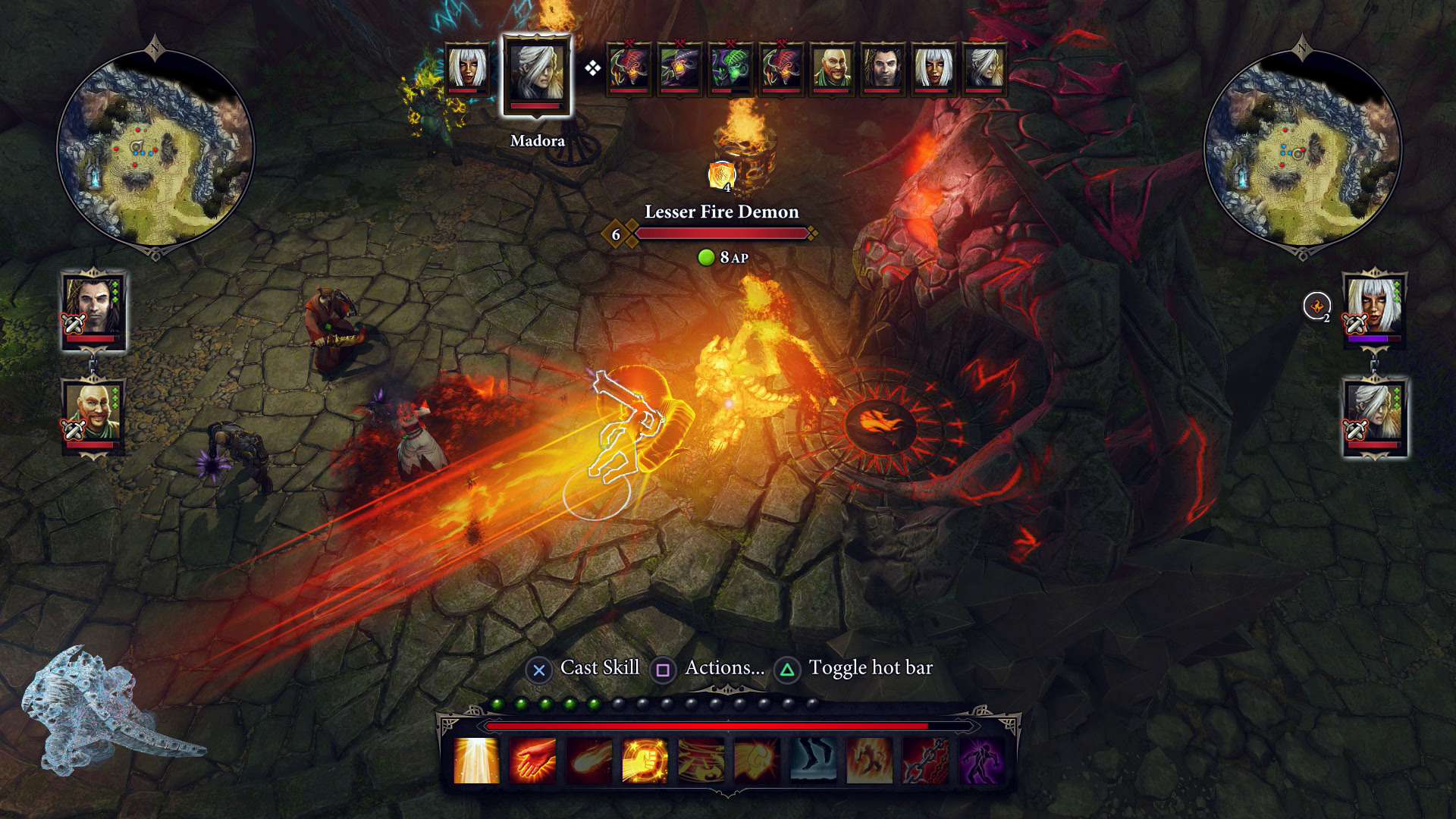 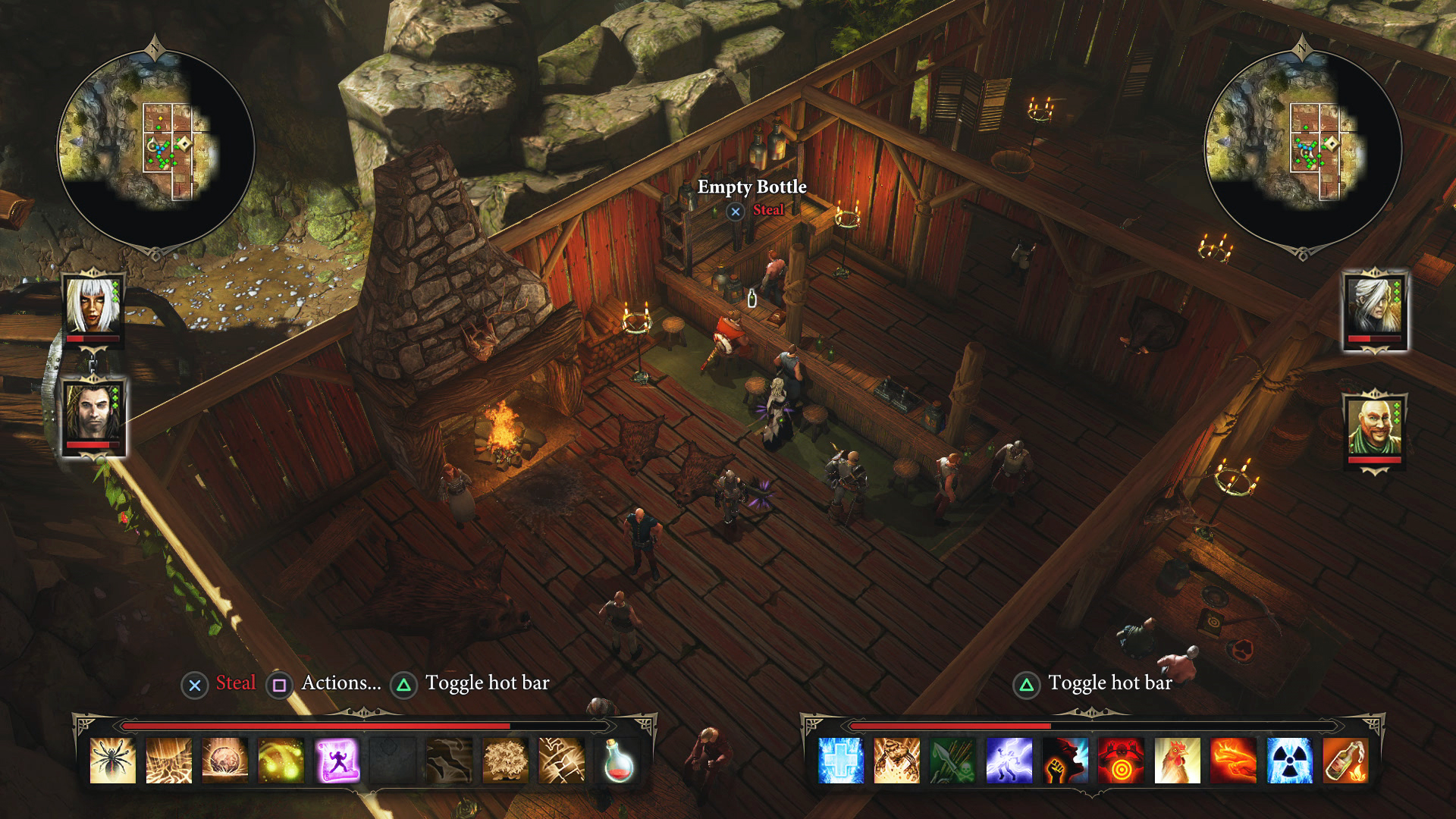 So far, the Enhanced Edition has offered the terrific interactive environment and complex spell interactions of the original plus a fine layer of polish. D:OS has always given players a multitude of ways to skin its cats. The addition of new skills just enhances that.

In a very early-game example, you’ll find a ship on fire at the first town you come to. You can help to put it out, but you’ll have to figure out how. Drop any one of a dozen spells, items, or abilities on it to quench the flames. I splooshed it out with a water balloon, but you might use a water spell or a rain scroll.

Want to open a locked door? You can beat it down, pick the lock, find the key, or throw spells at it. Just be careful you don’t burn the house down. 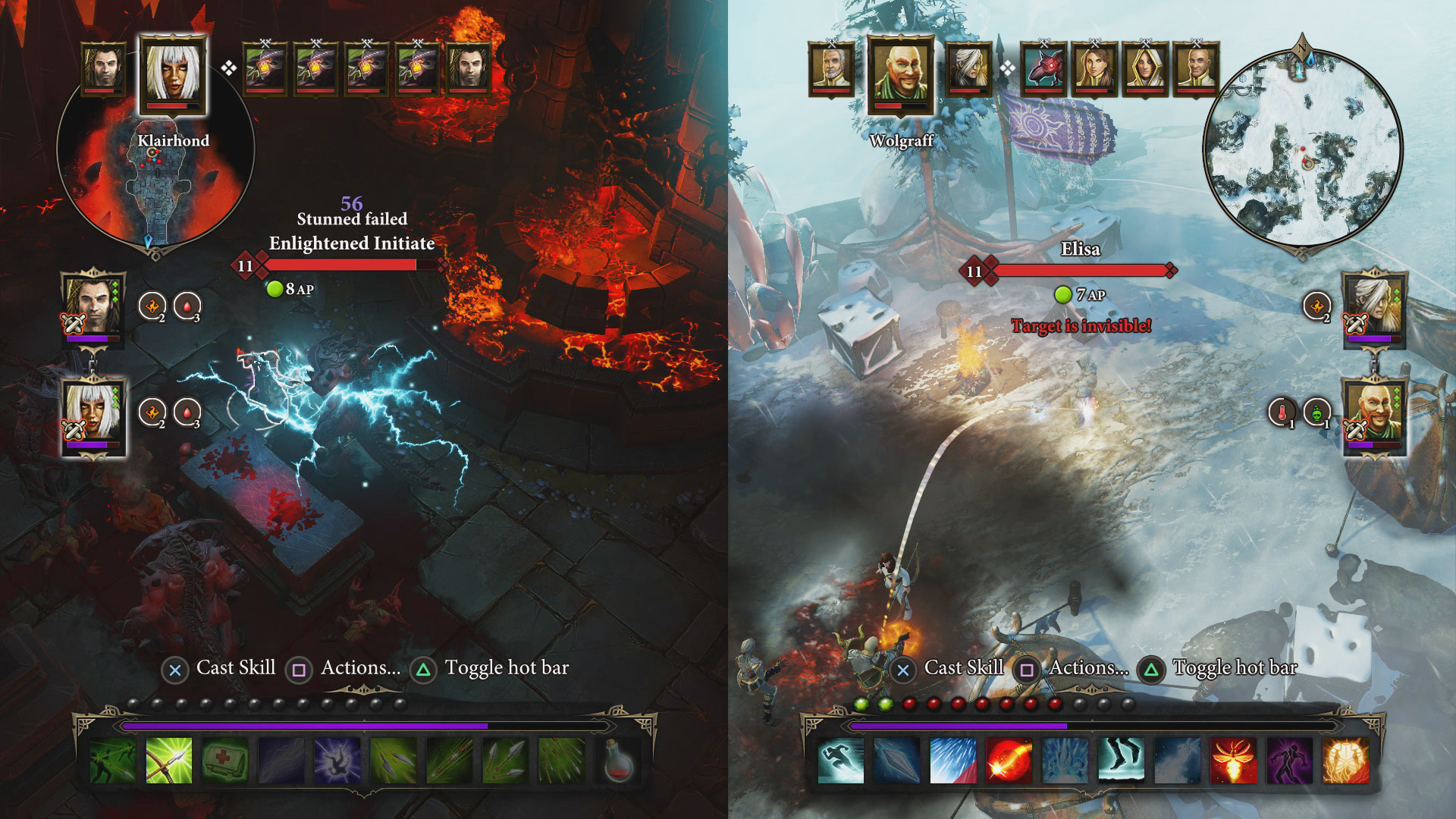 Above: Two players, two different parts of the landscape, two battles — one game.

I have to do what again?

D:OS was unforgiving in its original PC incarnation, and it’s only gotten worse here. While those helpful tutorial moments do pop up as they did on the original PC game, parts of the enhanced console edition are substantially harder simply because you can’t point and click at anything you’d like on screen.

Take one moment early in the game when I and a role-playing comrade at GamesBeat were stuck in a snippet of an alternate setting, probably no more than a hundred game yards long. To return, all we needed to do was to use one of the game’s Waypoints — an item that turned out to be on the game menu, not included inside the console UI.

It took us 20 minutes to figure this out. We ran repeatedly around the area, tried every last dialogue option of the NPCs present, and clicked on everything worth clicking on.

Between us, we have more than 60 years of RPG experience, but it wasn’t the first or the last time we got caught flat-footed. One time, I electrocuted every member of our party because both they and the enemies were standing in water. (Shhh. My playing partner didn’t notice that one.)

I don’t mind that Divinity asks you to figure things out or that it’s hard. That’s part of the fun. But I do sincerely miss the little things that the PC version offered to make figuring things out substantially more intuitive: tooltips, for example.

Console controls can be clunky

D:OS offers a ton of moving parts, and the Enhanced Edition deepens an already-vast experience with new abilities and new options. From a gameplay perspective, this makes the game even better.

But from a control perspective, it sometimes makes simple actions unnecessarily difficult. Everything is bound to buttons, but at some point, the game runs out of button combinations to use. Some things require manually navigating through choices every time you want to use them. 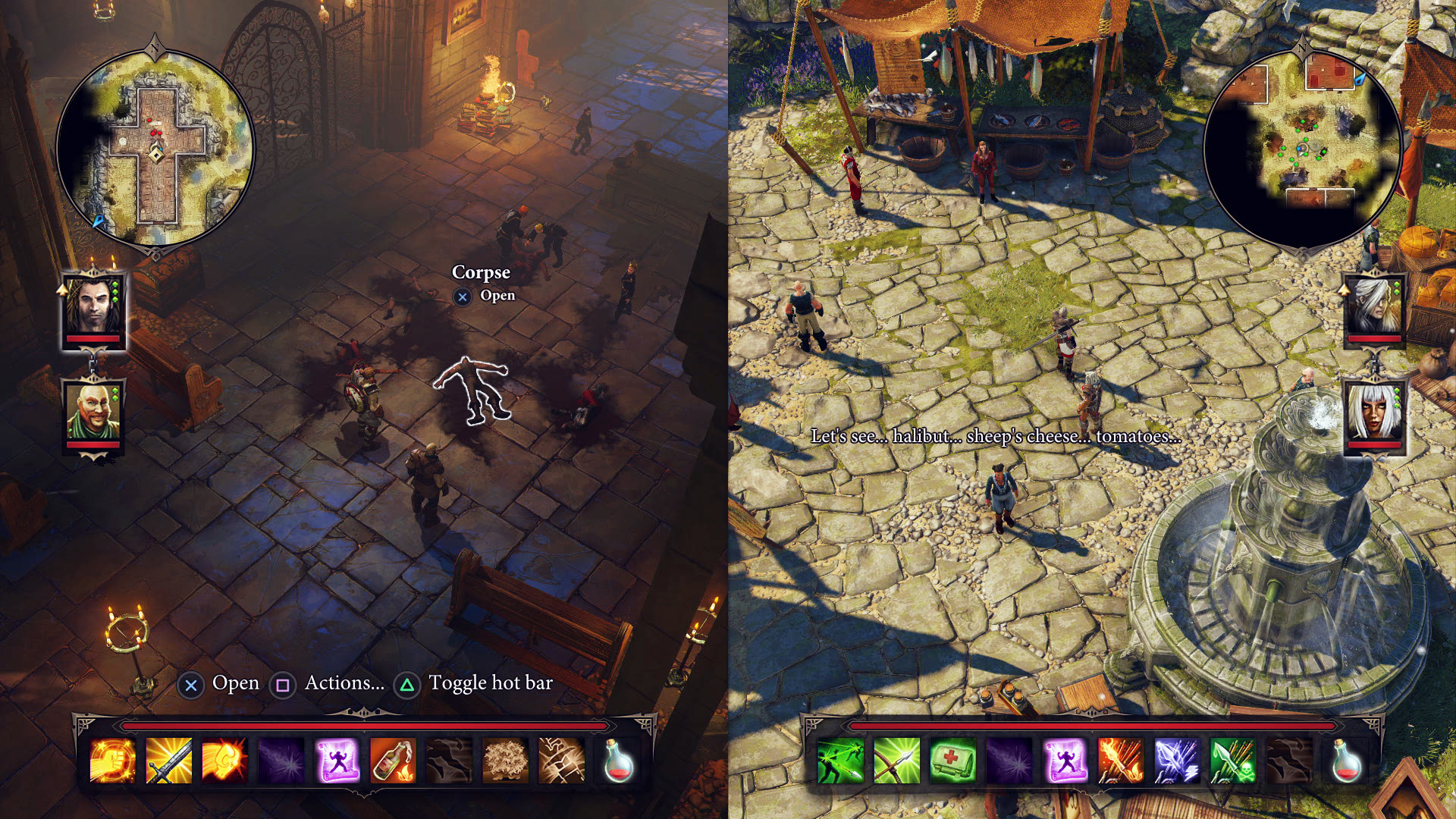 Above: That’s a lot of options, but it still doesn’t make up for a mini-map full of clickable buttons.

Larian attempted to compensate for some of the troubles. They implement a multi-item “inspect” feature very well here, for example, to allow you to hunt through piles of boxes or crates fairly quickly instead of laboriously d-sticking over each one.

But almost nothing in the Enhanced Edition feels as easy on a console as it does on a PC. I didn’t find that surprising, but it still disappoints. That’s a shame, because the idea of crashing on a comfortable couch to play a game this long should attract a lot of players.

Some bugs make their way into co-op play

Larian has fixed a multitude of bugs in the PC version as a result of player feedback, and I’ll be curious to see whether they take that approach with console updates as well. Co-op play in particular, perhaps because they just recently introduced it to the game, displays its share of glitches.

Try sneaking around, for example, and you may find that one person or the other can’t see the flashlight-style lighting that indicates where your opponents are looking. Dialogue options still depend on whether you, personally, are the character holding the quest item, which may not be a bug but sure annoys me.

On at least one occasion, combat didn’t trigger for my co-op buddy even when he was standing next to me, leaving him unable to help as I was ground to dust. (Or so he said, anyway.)

Last year’s deep, organic, interactive, and occasionally funny Divinity: Original Sin made PC RPG players very happy, and this year’s Enhanced Edition will definitely do the same. If you haven’t played it yet, snap it up immediately on that platform.

If you’re a console player, you should be aware that a little control wonkiness and some extra, unnecessary difficulty await you.

That said, those problems shouldn’t be enough to scare you away from a tremendous RPG. Even with its faults, Divinity: Original Sin Enhanced Edition offers the best console co-op RPG action this side of Baldur’s Gate: Dark Alliance II.

The rating for this review will come when I’m done with the story, but the gameplay alone will earn a very high score.

Divinity: Original Sin Enhanced Edition comes out October 27 for PlayStation 4, Xbox One, and PC. The publisher provided GamesBeat with a copy of the PS4 game for the purposes of this review.