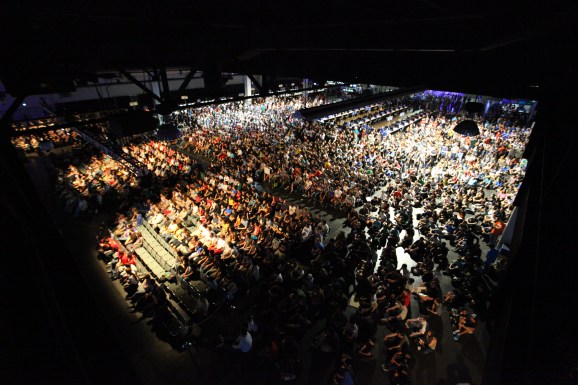 Esports is a fast-growing space, but ESPN is not talking to Riot about broadcasting League of Legends.

Competitive gaming is growing into a lucrative industry at a rapid rate as Americans and Europeans turn more of their attention to it.

Esports generates $748 million in revenue worldwide, according to industry-intelligence firm SuperData Research. North American and European fans make up more than 52 percent of that market, and total viewership has grown to 188 million people. This is making pro players into superstars, and it has led to investors rushing into the space with cash. And all this excitement and growth is probably only going to grow as SuperData predicts this sector will balloon even further to $1.9 billion in revenues.

Now, none of this money includes the millions (or in some cases, billions) of dollars that some games are earning from their active players. For example, League of Legends is free-to-play with microtransactions for characters and skins, and it is one of the most successful games ever made in terms of money earned. And a large reason it is so successful is because of its popularity as an esport. But SuperData’s figure is only looking at what the actual pro competitions bring in through ticket sales, advertising, gambling, and more.

For now, the most money is coming from brand sponsorships.

“Brands have taken notice of esports’ popularity and many have become sponsors quicker than projected,” reads the SuperData report. “By year’s end, sponsorships of tournaments, players, and esports-related sites will exceed $578 million, just 28 percent less than this year’s NBA sponsorship total.”

That makes up 77 percent of all esports revenues. The remaining 23 percent is made up of the daily-fantasy gaming sites, prize pools, tournament tools, merchandise, and ticket sales.

And at $15.9 million, ticket sales are by far the lowest. So while organizers will continue putting together live shows because they make for more exciting broadcasts, most will have to make the bulk of their money through other means.

For investors, those other means is where the excitement is.

Finally, while money is exchanging hands in the background, fans are still focused on the spectacle. Like traditional athletics, people who watch competitive gaming are picking favorite teams and players. This is presenting more sponsorship opportunities for the people playing these games for a living.

This pushes the space closer to a day when more people watch these events than play the games, just like it is with baseball, basketball, and football.