Blue Crystal Labs, a startup created by former Zynga social-casino executive Jesse Janosov, is unveiling its skill-based social-casino game today. The whole point of doing a social-casino startup in this mature stage of the $3.4 billion industry is to prove that innovation is still possible in a sector dominated by giant companies.

Simon Slots combines the old sound memory game Simon with the spinning reel of a slot machine. You have to remember the sounds and symbols that light up when the reel stops spinning and then tap the symbols on the screen in the right order. Beyond the pure luck of slots, you have to show some actual skill.

That means that Blue Crystal Labs’ new title could be classified as a skill-based game, and that means it could fall under very different regulations when it comes to gambling. At the moment, Janosov said in an exclusive interview with GamesBeat that Simon Slots is a pure social-casino game with virtual goods purchases. You can buy virtual goods with real money, but you can’t cash out your winnings in the form of real money. That means it is not a gambling game.

But Janosov has left his options for the future open. For instance, if he converted Simon Slots into a gambling game where you can win real money, then it would have a different classification. Most games of chance — where the outcome is random and not dependent on skill — are illegal in all but a few states. But skill-based games are legal in about 41 states. If Simon Slots is classified as a skill-based game, people could bet real money on it in 41 states, not just three. 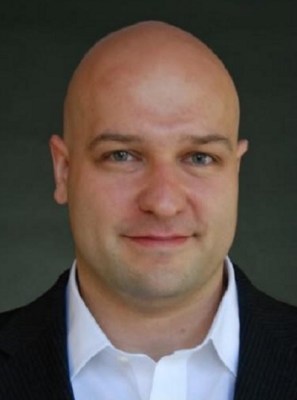 That strategy is consistent with a prediction made by Adam Krejcik, an analyst at Eilers Research, which specializes in social-casino games.

On top of that, Janosov also believes his game will appeal to different audiences. Land-based casinos are losing their audiences because mostly older people play slot machines in casinos. Younger people who grew up in the digital age want something that is more interactive, Janosov said. He thinks that Simon Slots is a more modern game that could be appealing to younger audiences.

“We have focused on both problems in the real-money stage and the next-generation gamer,” Janosov said. “Younger players are not converting to become real-money players on slot machines. They are aging out and are not getting replaced” with new gamblers.

He added, “Pushing spin is not enough for these new players. The problem for land-based casinos is that they have a cash cow in slot machines, but those machines are not appealing to the new audiences. This is what we have done. We bridge the gap to the new gamer without alienating new players at all.”

The title is available as a live beta on Google Play, Windows, and the Amazon Kindle. An iOS version is still in the works.

Simon Slots is currently in “soft launch,” or testing in a limited number of territories. The game runs across a wide base of Windows, iOS, and Android devices. You can also send challenges to another person.

“We hope it can be a real-money game, but we are starting with free-to-play social-casino games,” Janosov said.

The company has raised $1.5 million in seed funding. Among his investors is Mark Pincus, the CEO and founder of Zynga.