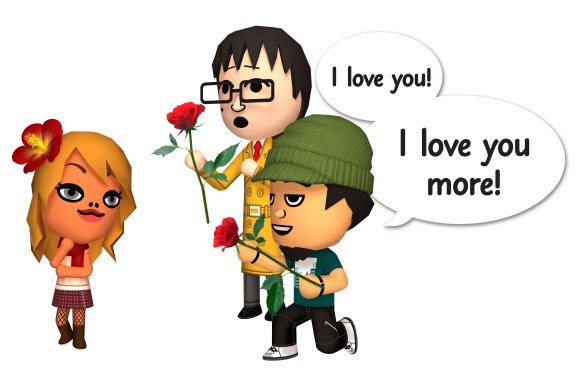 Tomodachi Life had your Miis communicating with each other, and now Miitomo will take that to the the next life.

We finally know what to expect from Nintendo’s first mobile game.

Miitomo is the name of the game that will represent Nintendo’s first leap into the world of smartphones and tablets. This game will focus on player-to-player communications as well as dressing up your Mii avatar, which Nintendo has used since the debut of the Wii. The app will launch by March 2016 (after getting delayed) as a free-to-play download with microtransactions. If the game catches on, it could give a boost to the publisher’s earnings — and shake up the $30 billion mobile gaming market. But it also expects that these smartphone games will increase the value of its properties.

With a game about talking with others and designing your own Mii, Nintendo plans to make money by selling cosmetics items to dress up your character. And you’ll want your Mii to look good, because they will go out and communicate with other Miis on their own even when you aren’t actively playing the game.

The idea behind this is to encourage people who don’t like talking about themselves to reveal more to their friends.

If all of this sounds familiar, that’s because it seems like it is building on top of the popular Tomodachi Life series. That 3DS release was all about bringing Miis on your portable to life through weird and funny interactions. Unlike Miitomo, Tomodachi Life didn’t really have any online functionalities.

But Tomodachi Life does have an in-game economy where you could buy clothes and items for your Miis, and dressing them up in funny stuff and sending them out into the virtual world to behave as they wish is the whole point of that game. With that experience, Nintendo should have little trouble rejiggering those mechanics for smartphone and tablet players.

We’ll likely learn a lot more about Miitomo and exactly how it’ll work in the new few weeks and months. Nintendo originally planned to release the game before the end of the year, but chief executive Tatsumi Kimishima said he wanted more time to explain and promote the app before pushing it out into the wild. Kimishima also said that Nintendo would have some more unannounced games coming for the Wii U and 3DS this holiday.