Outlines during the games show you where enemies and allies are standing nearby, and if you listen carefully, you’ll hear the distinctive footprints of your comrades and opponents in perfect 3D position, telling you where you’ll see them next. 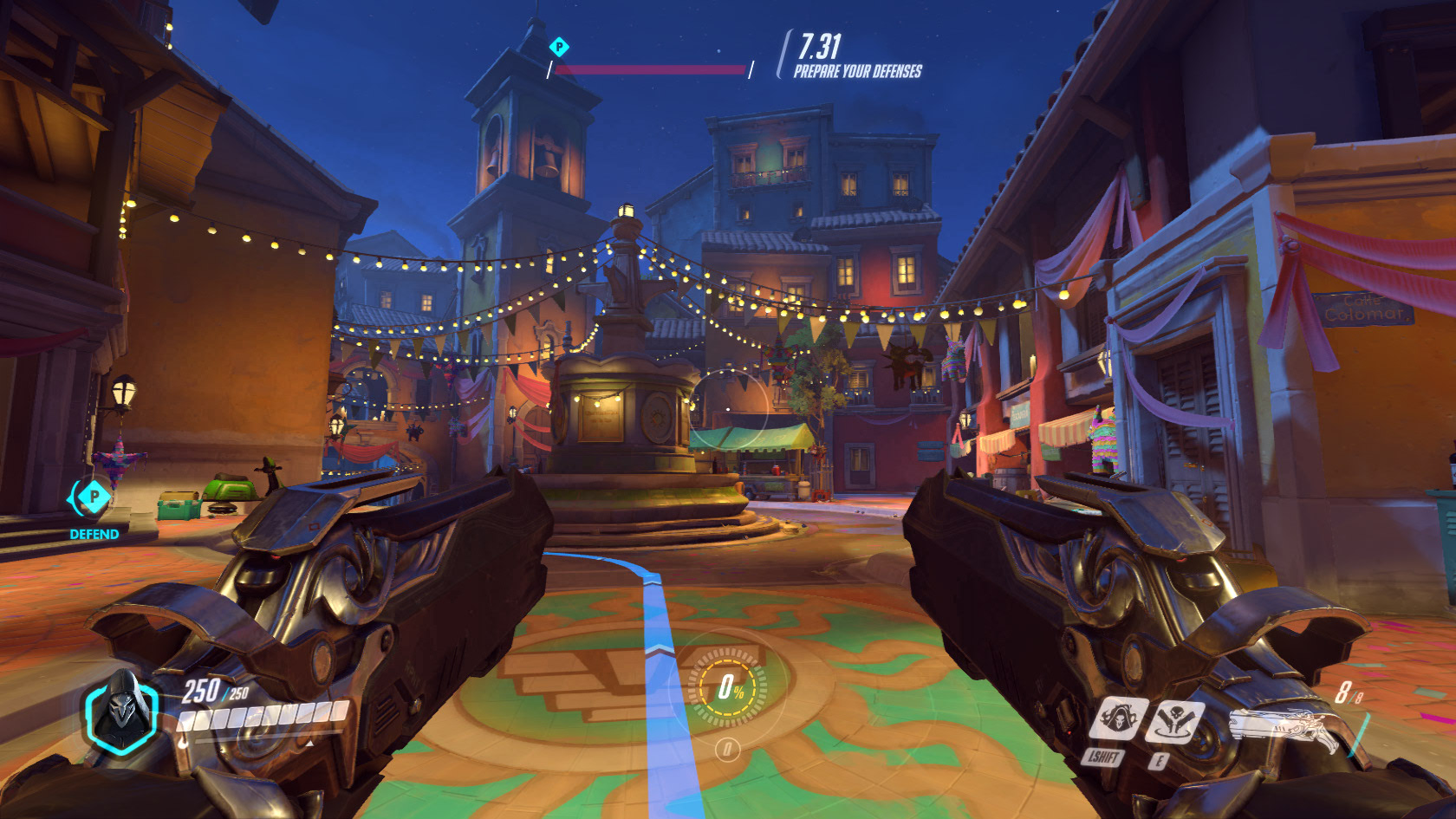 Above: The Reaper visits Dorado.

Dorado’s gorgeous take on nighttime Spanish architecture offers something beautiful to see at every turn. It’s worth taking in a skirmish just to look around. The map isn’t any more detailed than the others, but the textures combined with the moody night lighting make it fun to sneak around its many tight corners.

This primarily outdoor map offers tons of cover, places to hide and turtle, and strategic spots to leap out and melee an enemy. 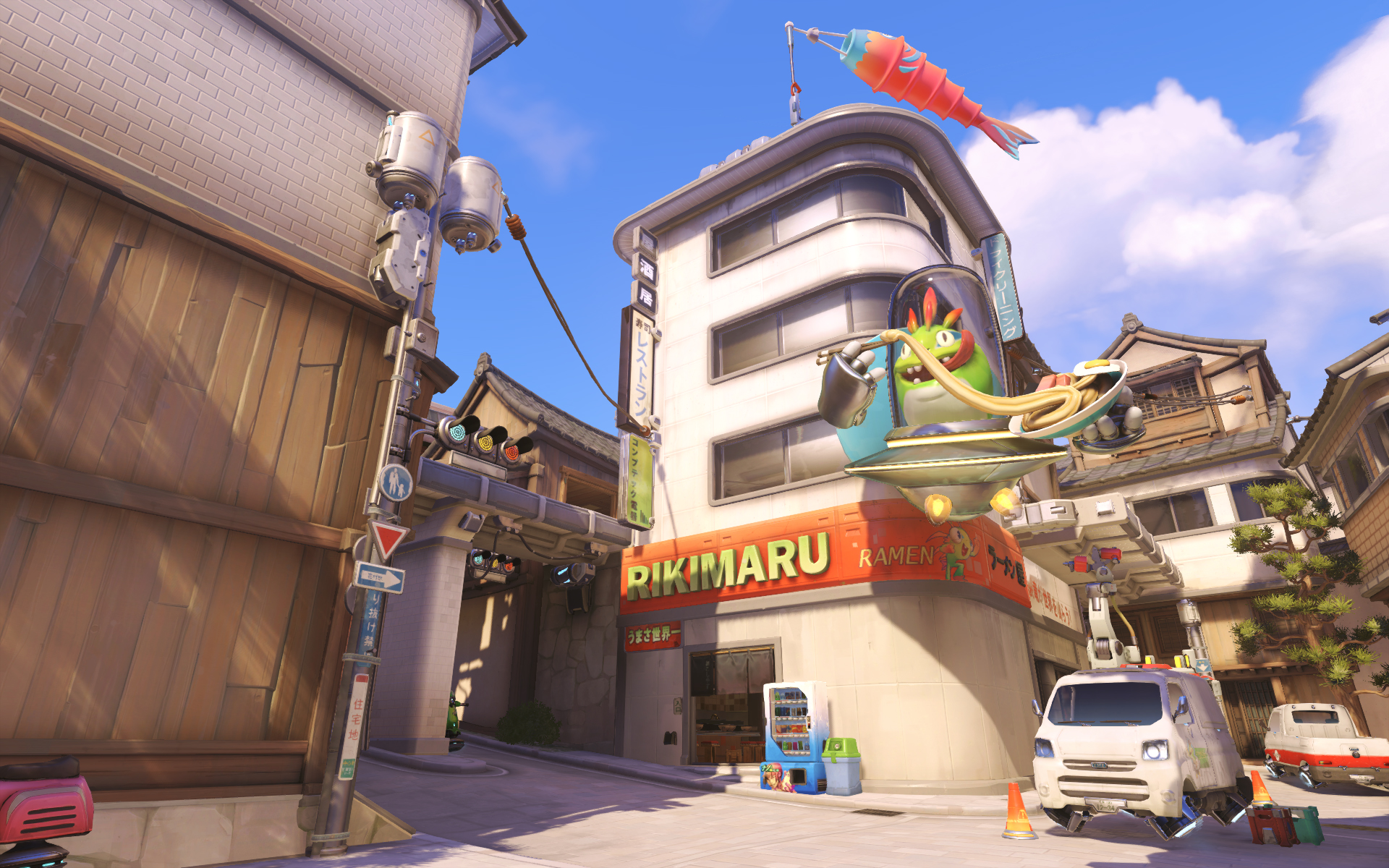 Above: For the classical cherry-blossoms part of Hanamura, see the first image in this story.

Hanamura offers a Japanese-style setting in full cherry blossom mode. The buildings are an interesting mix of modern Tokyo and ancient shrine. Most of the gameplay is in the long straightaways offered by the streets, but there are some small buildings to get caught up in and a few ledges to snipe from. 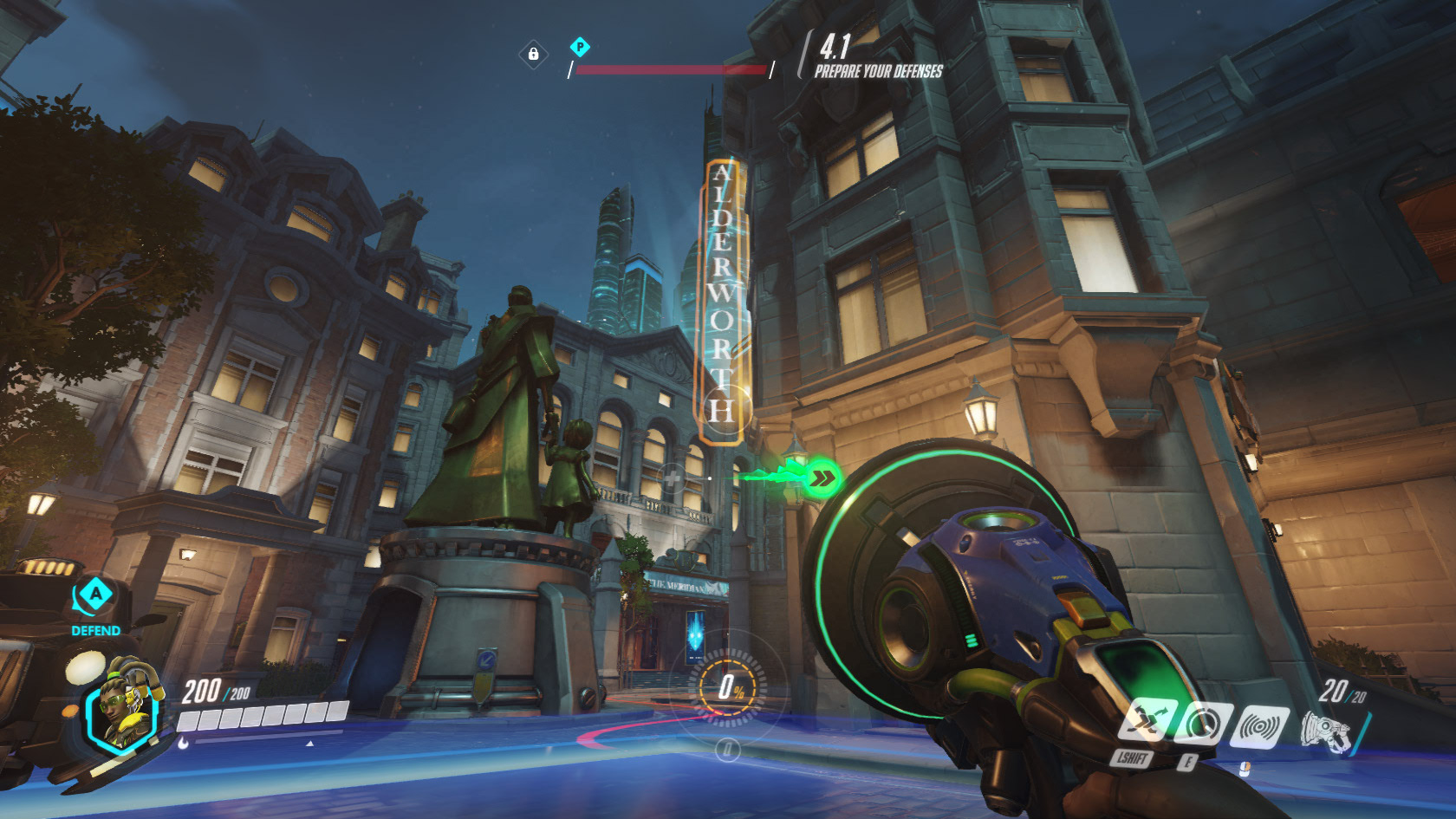 Above: King’s Row during a match.

King’s Row is a British nighttime cityscape. The play areas are primarily outdoor, with city squares and building lobbies offering plenty of vehicles and corners to duck around. Long line of sight can be difficult to find here, favoring short-range fighters who won’t be as easily picked off. 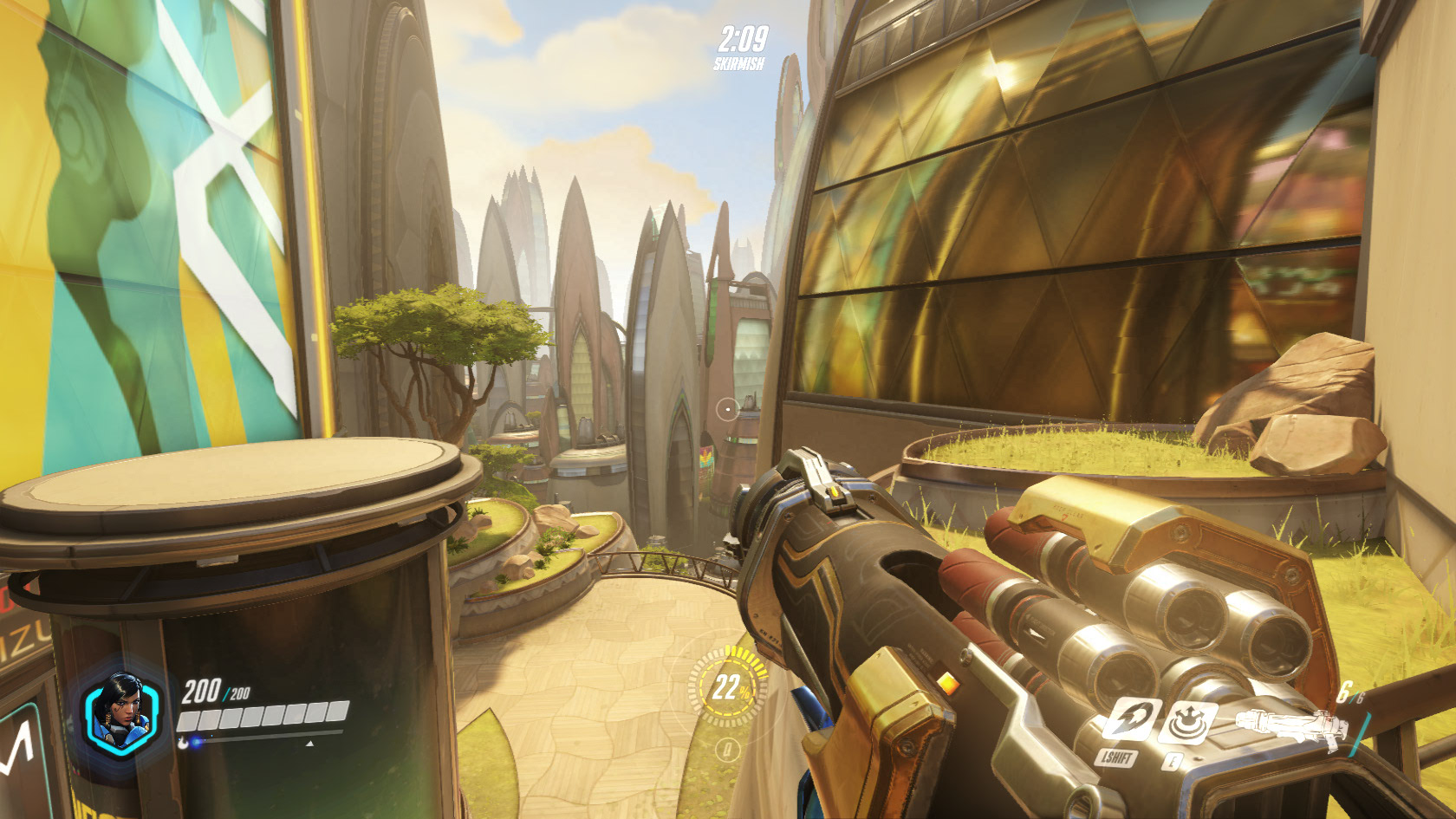 Above: Pharah takes in a vista in the Numbani map.

This Middle Eastern-inspired, futuristic desert city offers an open daytime cityscape to play in. In addition to plenty of open landscape, it offers a number of vertical levels and tons of balconies, making it great for snipers and characters with vertical climbing/jumping abilities. 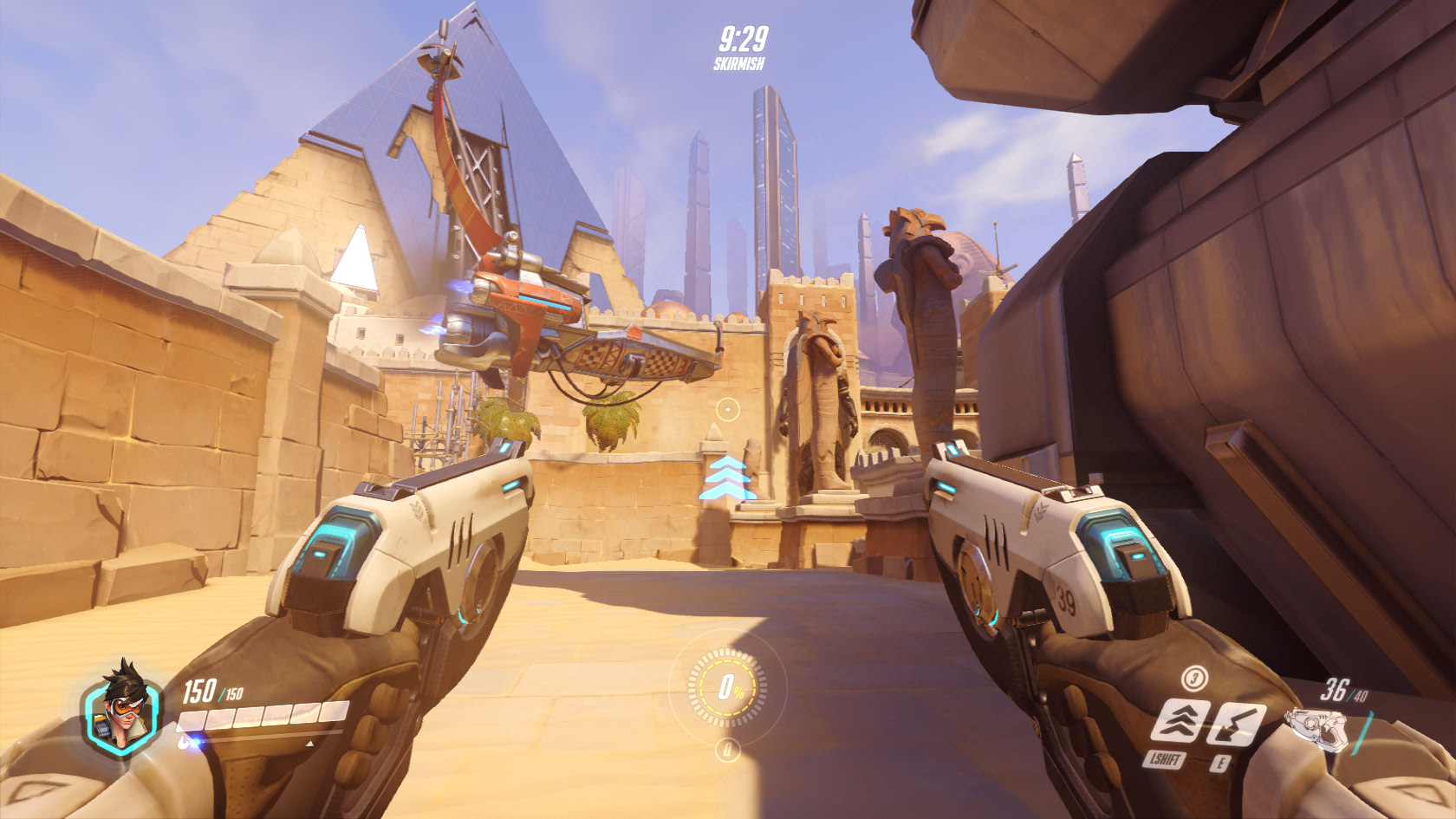 Above: Tracer gets a little desert fun.

This is another multilevel, primarily outdoor map, but without the big vistas. Egyptian-style Anubis has plenty of overpasses and stairs, making multilevel combat the focus. I found Anubis one of the most fun maps to play because of the variety of settings and the way it frequently forced combat in a more-intimate way, rather like King’s Row. 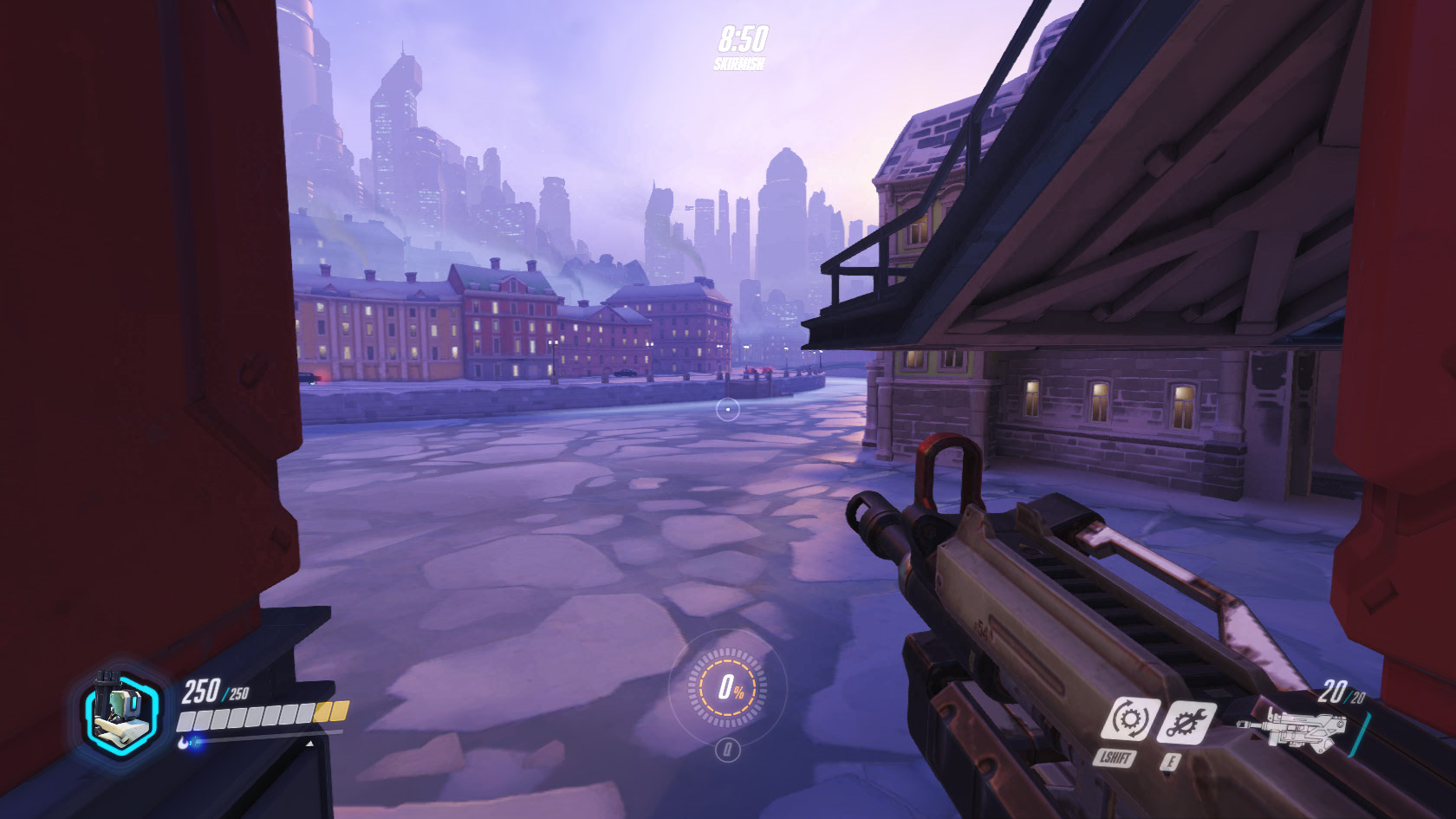 Above: A beautiful vista in Volskaya, but don’t look for too long. Your enemies are in the factory right behind you.

A factory setting with huge open spaces, Volskaya is the ideal setting for a major group melee brawl. Wide stairs and hallways and plenty of big rooms offer players the chance to meet up as groups or take each other down with major abilities. Volskaya makes shielding and defensive capabilities a must; it’s a fairly terrible map for squishy characters. 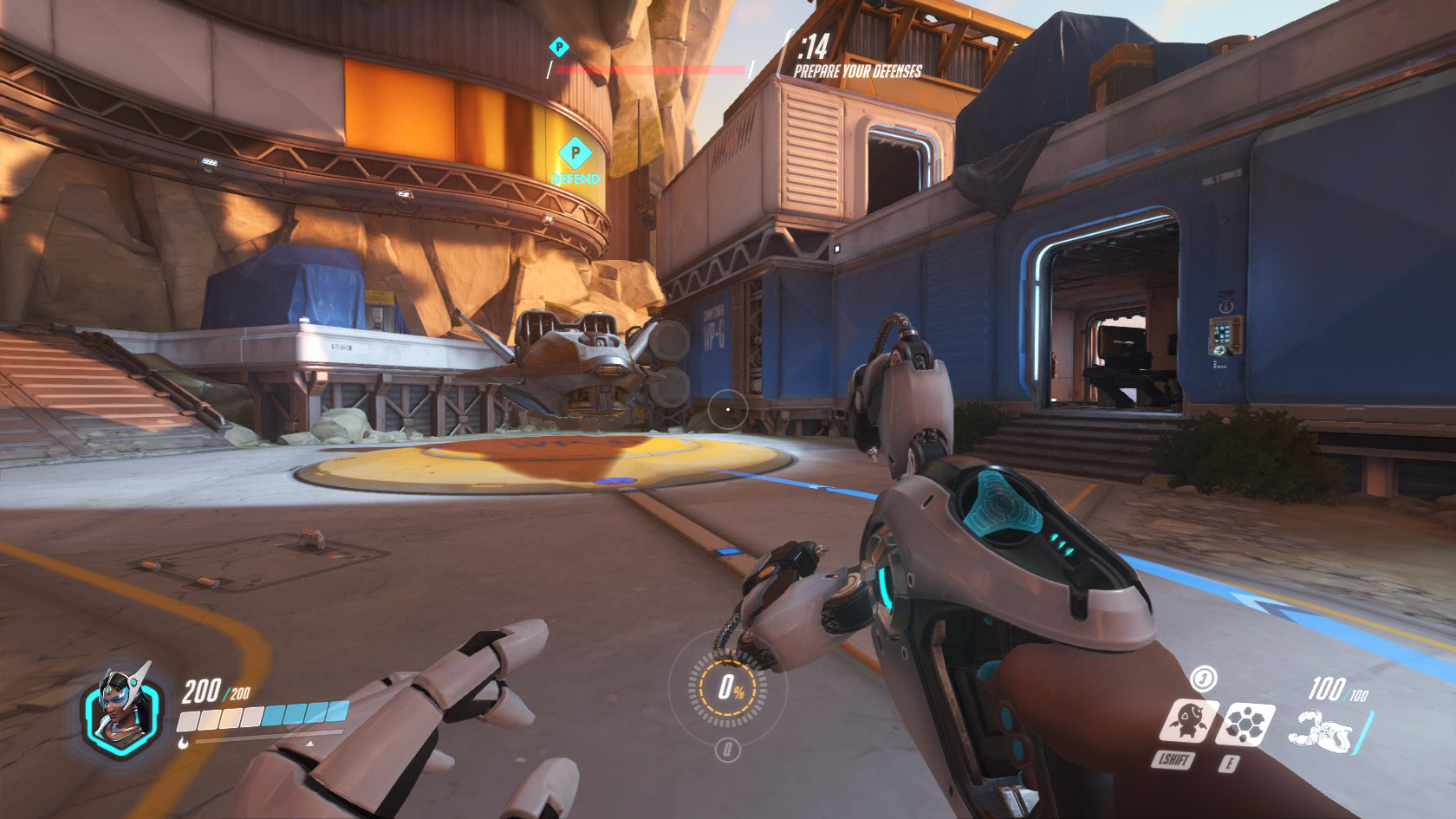 Above: This counts as a large space in Gibraltar.

Gibraltar is a futuristic port with plenty of tight, twisty hallways and corridors. It rewards player skill; while characters can find plenty of places to hide, it’s also possible to get bottlenecked and destroyed if you’re not careful. Those annoying Symmetra turrets are great here, as are Zenyatta’s orbs.

Next, I’ll cover all the Overwatch tank and defense characters currently available in the beta.

1 2 3 4 View All
GamesBeat Black Friday Gift Guide: Everything we recommend this holiday season