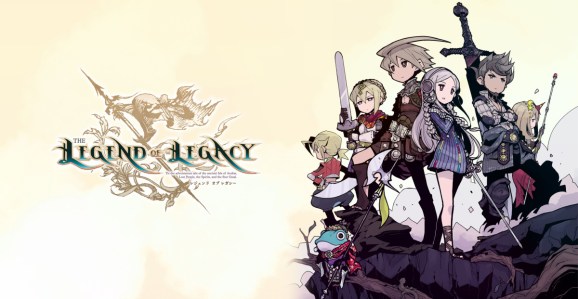 Japanese role-playing games tend to stick to safe waters when it comes to the staid conventions that hold together the genre. Battle screens, dungeon progression, and character development all taste of a similar tang when you compare the most prominent JRPGs to each other.

Not so with The Legend of Legacy, the new experiment from key staff that worked on the SaGa series, a similarly madcap franchise that mixes up what you think you know about JRPGs. With thoughtful consideration given to why mechanical tropes are the way they are and changing them in ways that seem obvious in hindsight, The Legend of Legacy explores how far you can bend these mechanics before they break.

It’s the ways in which they break, though, that hold back this fascinating experiment from being a good game. Above: The world map is open to exploring however you want.

Filling in the corners of the map

The Legend of Legacy about exploration, about venturing into the unknown and seeing what shakes out. When you start, a short cutscene is all that stands between you and the unexplored island of Avalon, which you can tackle however you wish. You start with access to one area, but soon, you’re finding exits that lead to completely new locations to explore, equipment to find, and even optional bosses to challenge.

This makes The Legend of Legacy fairly open-ended in how you approach it. Finishing it requires that you to find certain locations and do certain things, but it never really tells you exactly what you’re looking for except in the vaguest of terms. The only way to progress is to fumble around blindly until you find what you’re looking for. This may sound like a complaint, but I mean it as a compliment. The Legend of Legacy perfectly taps into that primal need to see where the road takes you. Even just finding a new screen is often a bigger deal than one would think it should be. Wandering around to see what you can see is a big part of the appeal of the game.

The way battles intersects with the field maps also encourages exploration in a smart way. Encounters are not random, but instead are visible on the map and therefore avoidable. And you never feel the grind of pushing your way through an area because you completely heal between battles. Instead of staying dead or coming back at 1 hit point, their maximum health decreases every time they die, and they can only recover it from resting at the inn. Running away is 100 percent guaranteed, but it will jettison you back to the beginning of the area. The Legend of Legacy rethinks the costs of failure in beautiful ways to place the emphasis on exploring and mastering a location.

By far one of the most exciting aspects of The Legend of Legacy, the leveling system injects little touches of innovation into supposedly stodgy structures. Your characters, for instance, have stats associated with them (as in almost every other RPG), but not levels. Instead, your characters’ individual stats will increase depending on their battle stances and tactics used during the fight. And rather than issuing broader commands, like attacking or defending, you program different combinations of stances for each character. The base ones, Attack, Guard, and Support, embody RPG roles in the broadest terms and enhance your characters’ effectiveness in these roles.

These mechanics come together to allow you to customize what you want your party members to be doing, but the great part of this is the fact that you’re not accomplishing this through a skill tree or manual stat increases through a menu. Your heroes settle into their roles naturally just by playing those roles, which is incredibly refreshing, taking all of the fussiness of character customization and overlapping it with the action. Above: Skills suddenly manifesting are the most exciting part of battles.

You learn skills through your equipment, but instead of gaining them at the end of battle, they’ll unexpectedly manifest when you’re trying to do an attack you’ll already have. It may be a small difference, but regular encounters suddenly become much more exciting when you have the chance to immediately test out your new toys.

Magic is similarly active. Instead of just being able to cast spells whenever you want, you have to first make a pact with the associated element. The catch is that enemies will drag those contracts back to their side, letting them cast spells of their own and often creating a tug of war for the right to use magic. Contracts also stain the battlefield with the associated color, filling in a meter on the bottom screen filled with all four element colors. The bigger the percentage of that color, the more effective a spell of that element is. And sometimes field effects paint the initial color of a battle to the point where you don’t have to make a pact with an element because it’s already so dominant. The Legend of Legacy wants you to play around with your powers and not just rely on the same strategies over and over, which plays into the exploration theme beautifully.

The Legend of Legacy looks like it ripped its graphical style directly from Bravely Default, and nothing’s wrong with that. The chibi-looking characters are a great way to compensate for a lack of detail on the 3DS, and a dose of cute is often welcome in the gritty landscape of gaming today.

But what’s really eye-catching is the environments. Instead of rendering everything at once, the game employs flat field dressing that makes everything look like a pop-up book. In fact, a lot of the thrill of exploring is wrapped up in you watching the world unfold, cascading and receding as you pass by paper trees and shrubs. Framing the world in a semi-storybook vibe adds to the whimsy and mystery of Avalon, and makes for beautiful scenery to boot.

Barely anything to discover

Yes, you get to go around exploring different settings and finding exits to new areas, and yes, the openness of tackling the world however you want is freeing. But for all the breadth of land mass that The Legend of Legacy gives you to explore, it’s all strangely empty of anything interesting to find. Aside from coming across exits to new areas, the levels themselves are littered with items to find, but most of it is vendor trash that’s not worth a lot in the first place. Some shiny item spots also sometimes ambush you with enemies instead of giving you anything, so you start to ignore them. The most valuable things you can find are the Whispering Stones you need in order to learn magic skills, but after a while of just finding more and more Whispering Stones and nothing else, the motivation for exploring starts to wear thin.

Exploration is one of our fundamental gaming instincts, but there needs to be a payoff as well. When the only reward you even remotely care about is a skill you may or may not use and plot points, your interest begins to diminish. And though mapping areas and taking in the scenery is nice, the island of Avalon never really makes you feel like you’ve truly discovered something special. Above: Pick from seven characters who just aren’t different enough.

The Legend of Legacy utilizes minimal story, relying on unraveling the cryptic history of Avalon to keep you pressing forward. This in itself is a good thing, as far too often in JRPGs, story gets in the way of the action, and many times isn’t even that good to begin with. Here, the background is sparse, cryptic and mysterious. In other words, it’s ideal for a game about exploration.

The same can’t be said, however, for your potential party members. At the beginning of the game, you can choose from one of seven different characters to be your main avatar. Each one has a short description and starting stats slightly different from each other. The idea is to have seven different stories intermingling with each other, where someone could finish the game seven times to see all of them. But other than the starting and ending cinemas and some sparse dialogue, there’s almost no difference between character playthroughs. And when all your selectable characters are both functionally and thematically nearly the same, there’s very little point to them.

I’m not entirely being fair saying that all of the characters are the same, because each of the seven characters do have different affinities to weapons and elements, but you’d never know it. The only thing you know is their backstories and their three main stats. Skill development is similarly frustrating because you never know what new skills you’ll suddenly learn and when you’ll learn them. You can sort of aim characters at a vague direction for them to develop into with battle stances and such, but in reality, you don’t have nearly as much control as the game would like for you to.

The skills themselves also feel largely redundant and unnecessary. The ones that actually cost something will often just be more powerful versions of normal attacks or ones that add status effects, but then you sometimes get a bunch of free attacks of similar power that may or may not have hidden advantages or disadvantages that you’ll never figure out. Spells are a lot more varied, but they require you to equip Whispering Shards to an Accessory slot before you can learn it permanently with repeated use. But in order to use the spells you’ve learned, you must have that element’s Singing Shard equipped to the other slot. In essence, you have to learn one skill at a time … unless, of course, it suddenly decides to give you a new, unequipped spell for some reason. It’s infuriating and limits the amount of magic you can use. Above: Magic occupies an intriguing yet awkward space in battles.

Combat tends to not hold back when you first start The Legend of Legacy. Because you heal between battles, minor skirmishes can kill you if you’re not careful. This isn’t problem, and indeed, I would’ve hope the difficulty is higher given the plentiful resources you have.

The problem comes later when more enemies litter the battle screen. Eventually, so many foes will take part in encounters that they’ll start to overwhelm you, especially when each of them gets multiple attacks, ones that target the whole party, or effects that stun lock the party. The worst is those that combine all three, which is unfortunately too common in the latter half. They’re not impossible to win, as you just have to employ repeated use of whole-party attacks of your own and hope your defenses hold. It just makes for a lot of miserable encounters.

The Legend of Legacy chops and screws stuffy JRPG foundations in ways both sensible and exciting. With its refreshingly different mechanical tweaks to the JRPG formula and wonderfully open exploration, anyone with a vested interest in how such games can warp and mutate beyond their bounds would get something out of checking it out.

But the flaws these out-of-the-box ideas introduce make The Legend of Legacy a difficult game to recommend to people just looking for a great RPG experience. The Legend of Legacy is tantalizingly close to being a good game, but its anachronistic design is too much of an underdeveloped double-edged sword.

The Legend of Legacy is out for the 3DS now. The publisher provided GamesBeat with a code for the purposes of this review.