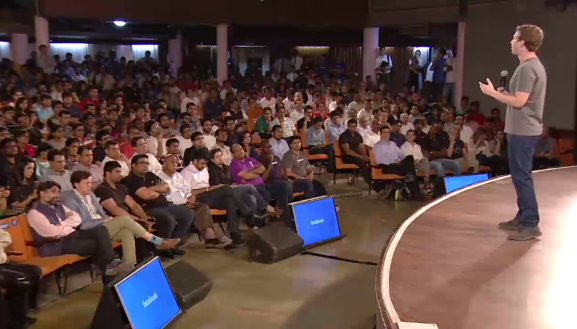 Facebook’s controversial free Internet project, Internet.org, has now brought online 15 million people who would otherwise have remained offline, according to comments from Mark Zuckerberg at a Townhall Q&A in India on Wednesday.

This number reflects global figures, but in India alone, the number of new users has reached one million — though Internet.org only arrived in the country about a year ago. India now has 130 million Facebook users, but is still home to one billion people living without Internet access. Globally, that number sits at four billion.

Last month, Facebook made some pretty significant changes to Internet.org, including renaming it to Free Basics, and opening it up to more developers and web services. Zuckerberg said that net neutrality is an important principle to Facebook, and added that half of people who try the free service end up becoming “full-paying customers” of the Internet.

But, he added: “People who aren’t on the Internet can’t sign a petition for a more open Internet.”

On Wednesday, a 7.5 magnitude earthquake hit India, and Facebook has now enabled more than three million people to be marked as safe, and allowed more than 1.5 million to be notified that family/friends are safe.

Asked what superpower he would choose, Zuckerberg said:

With technology, you can build super powers for the world. Oculus lets people teleport anywhere in the world, but this is only the beginning. You can dial up and down gravity and simulate what it’s like to be in space, underwater, or anti-gravity. That’s pretty crazy. In the future, not too far out, we’re going to have the ability to put on a basic headset and go anywhere in the world we want. And that’s going to be pretty good.

Finally, Zuckerberg said the Amber Alert program on Facebook, which was launched this year in the U.S. to help find missing children, has already found at least one child. He’d like to see that rolled out further across the global Facebook community in future.

Ken Yeung contributed to this article.