Kanvas, a social network acquired by AOL earlier this year, today revealed that it will add livestreaming to the list of creator-made content supported on its app. With this move, AOL becomes the latest to throw its hat into the competitive livestreaming ring.

The app already allows users to make and post videos, photos, and GIFs, all of which can be augmented with stickers and doodles. Aimed at teens and tweens, Kanvas has about 2 million users, 65 percent of whom are between the ages of 13 and 18. 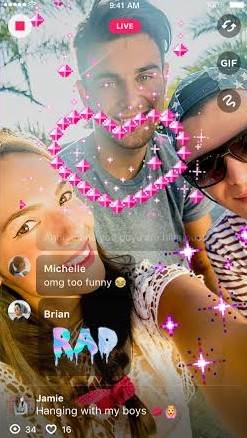 Kanvas’ livestreaming differs from other apps on the market in that it is rich with features aimed at its targeted youth demographic. At launch, Kanvas will have six filters for its livestream video as well as a slew of animated stickers. It also has a series of themes that can be overlayed onto a stream — like a live stream where cash is falling from the sky, for example. The app merges pixels with the video and renders in real time, so viewers can watch a doodle appear as it’s being drawn on a live stream and disappear as it’s erased. 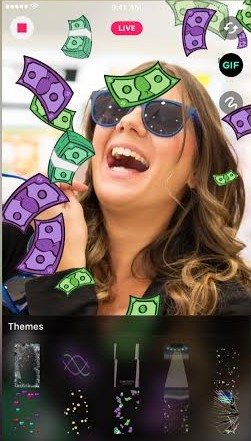 To bring livestreaming on board, Kanvas had to tweak its user interface slightly. In the original app, there were four tabs: Home, Explore, Follow, and Store. Home is a feed of all the fellow Kanvasers you like, and remains on the updated app. Explore and Follow have now become a single tab in Kanvas 5.0, where you can search for new users and hashtags as well as browse popular users.

Kanvas also now directly hooks into your contacts so you can invite more friends to the platform. It still has a store where users can buy additional sticker packs.

Though livestreaming has been available for a while through apps like YouNow, this year the medium experienced a sudden rise in popularity after the launch of Meerkat, a livestreaming social network. Since then, major tech companies have been quick to roll out competing platforms. Twitter quickly stole the spotlight from Meerkat when it launched a service called Periscope, which allows people to livestream video and leverages Twitter as a way to announce live content. Yahoo rolled out a silent livestreaming messaging service earlier this year, called LiveText.

“The way that I think about it is if you look at Periscope and Meerkat and the market to get an audience there, you have to be an entertaining person because all you’re doing is like talking or showing them something, whereas with this the bar is a little bit lower, because with this you could do stupid, fun stuff and maybe not be entertaining yourself, but you’re visually entertaining,” said Singh.

He thinks many available livestreaming platforms aren’t resonating with kids because they’re too professional. Even Vine, Singh thinks, is overly directed. Instead he wants to attract kids who are sitting at home with nothing to do.

“I want to own the hashtag #bored,” said Singh, “because they come here and they make stuff ’cause they’re bored.”