Google Now is showing me some interesting place recommendations this week. They’re courtesy of Foursquare.

The Foursquare app isn’t installed on my Android phone. Nevertheless, I’ve seen tips about restaurants and coffee shops and even a public park directly from Foursquare in Google Now cards.

This isn’t live for everyone on Android, though. Google and Foursquare declined to comment.

The integration is interesting on a few levels.

First, Google already has data, partly from Zagat, to make recommendations about places like restaurants.

Above: Foursquare app’s ranking in the iOS App Store, according to App Annie data.

Foursquare has a complicated relationship with Google. Foursquare cofounder and chief executive Dennis Crowley sold his startup Dodgeball to Google in 2005, but he didn’t leave Google on the best of terms. In 2012 Foursquare elected to migrate from Google Maps to OpenStreetMap. (It has since returned to Google Maps on Android, while on iOS the Foursquare app employs Apple Maps.) But while Foursquare has competed with Google in certain ways, that hasn’t stopped Foursquare from coming out with a Google Glass app and allowing users to export check-in data to Google Places.

Now there’s something new, and it’s in an important place. Google Now is a showcase of Google’s smarts. It provides deep links into content from apps, emails, calendar events, and even some websites — and of course, a Google search box. Google has a list of integrations online, but Foursquare isn’t currently on it.

And yet, Foursquare tips have slid into my Google Now feed as I’ve walked around San Francisco. In one case, as I passed Precita Park in the Bernal Heights neighborhood, Foursquare suggested I stop by: 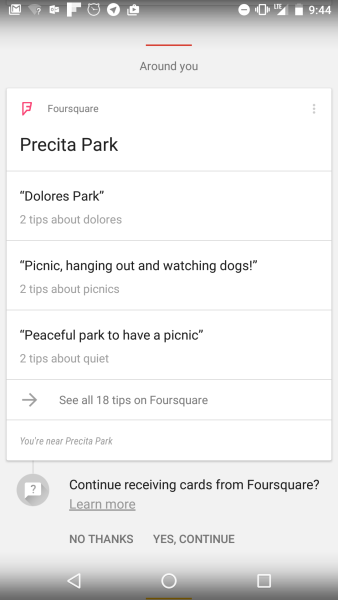 Above: A Foursquare recommendation for a park in San Francisco in Google Now. 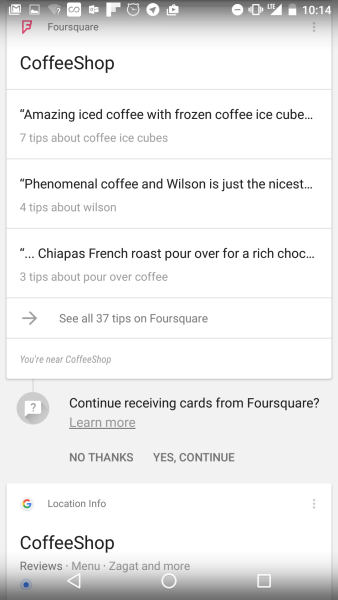 This suggests that Google isn’t giving up on place recommendations for this integration with Foursquare.

And maybe that’s not such a bad thing, because the cards are recommending different things. The card with Foursquare tips were about CoffeeShop’s iced coffee, while a review in the Google card cited its yerba mate. My favorite, in case you were wondering? It’s the Sherpa.