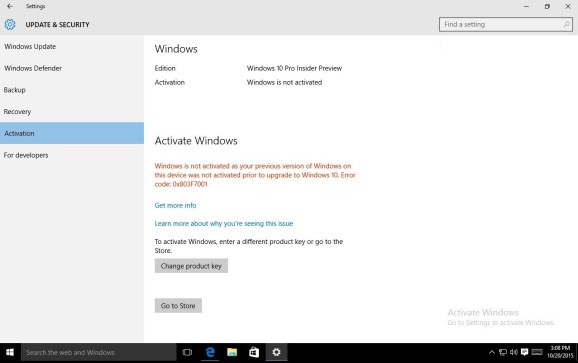 Microsoft announced today that it’s making changes to the way it handles upgrades to Windows 10.

“Depending upon your Windows Update settings, this may cause the upgrade process to automatically initiate on your device,” Terry Myerson, executive vice president for Microsoft’s Windows and Devices Group, wrote in a blog post today. “Before the upgrade changes the OS of your device, you will be clearly prompted to choose whether or not to continue. And of course, if you choose to upgrade (our recommendation!), then you will have 31 days to roll back to your previous Windows version if you don’t love it.”

This change — which can result in automatic downloads — should help Microsoft boost Windows 10 adoption above the “more than 110 million devices” level it is at now and get it closer to the company’s goal of 1 billion devices.

Microsoft has previously made PCs automatically download Windows 10 in order to speed up installation — although you can prevent that from happening. And earlier this month, Microsoft came out and said it was a “mistake” to have the checkbox for an “optional” update checked by default; the company said it would remove Windows 10 from Windows Update for those who had not made a reservation for a copy of the new operating system, which Microsoft released in late July.

Now that Windows 10 has built up a solid installed base, Microsoft is going to stop asking people to start the upgrade if they’ve already made a reservation for Windows 10, Myerson wrote.

And in the settings pages for Windows 7 and Windows 8.1, you can now tell Windows to stop showing notifications about upgrading to Windows 10, he wrote.

Microsoft also has a new way to deal with people with “non-genuine” — a nice way to say “pirated” — versions of Windows. Myerson explained:

One of the more interesting learnings from the upgrade is the creative efforts which non-Genuine customers have gone to, to initiate the upgrade process on Windows 7 and Windows 8.1 – and then how many have purchased Genuine Windows 10 activation through the Windows 10 store.

Following these learnings, we are going to start an experiment soon in the United States, which we will then evaluate before extending to other countries, to ease the upgrade of non-Genuine Windows 7 and Windows 8.1. We’ll offer a one-click opportunity to get Genuine via the Windows Store or by entering an activation code purchased elsewhere. If this turns into a path for most customers to get Genuine, we will expand the experiment. We’d like to welcome as many of these customers as possible to the legitimate Windows ecosystem.

Microsoft is also updating its Media Creation tool for upgrading many devices to Windows 10. Soon it will allow people to “create a single image capable of upgrading any 32bit or 64bit, Home or Pro, device,” Myerson wrote.