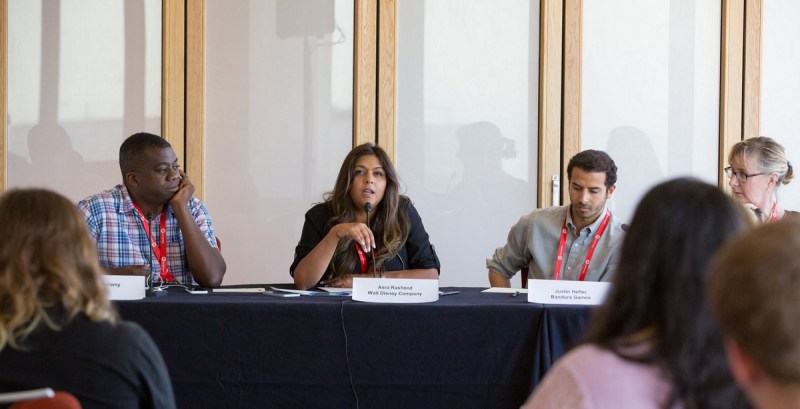 Bellamy: Similarly, Justin, how do you balance creative identity with cultural identity?

That’s how you bleed those things into one. That’s how you build a creative company culture that’s also diverse. You get your employees playing games together, seeing where their overlap is before their differences can become the determining factor in their relationships. We’re trying to be as wacky and fun in the office as possible. We have Marvelous Mondays and Fun Hat Fridays. It’s a way of getting people into the office feeling good about coming in to work.

We all become one when we’re all wearing a goofy hat. Black, white, or brown doesn’t matter when you’re all looking wacky. For us it’s about making the office more like the games we’re trying to make.

Bellamy: You’re at Microsoft. I can imagine there could be a discussion like, “We need to have the African-American club, the gay club, the this club, the that club.” And then I can imagine another voice like, “Why do we need all these clubs? Why can’t we all just be Microsoft?” You’re trying to cultivate people based on their skills, which are not necessarily tied to diverse traits. Are those going to be opposing forces — cultivating diverse identities versus assimilation into shared goals?

Meyer: I don’t those are mutually exclusive. When you have communities that are underrepresented, that’s a fact. So how do we foster and make this a great place that they want to work too? I don’t think it’s 100 percent about assimilation.

We do have women in gaming, black people in gaming, or Team Xbox Latinos. We have groups internally that we support to create affinity. Everyone wants to feel, at some point, that they’re with other people that are like them. If you do an exercise—Think about any time in your life where you were ever the “only.” Whatever the only means, just that you were different from everyone else.

The amount of energy that takes, when you’re constantly filtering the things you’re thinking about—You’re self-conscious. You’re not on autopilot. When you’re in the majority you’re on autopilot. There’s no judgment in that. It’s just how we are as humans. Part of creating that environment internally where everyone wants to come is providing those opportunities where people can be with everyone like themselves. There’s space for both. You can work toward common work goals and build a sense of community.

Within Xbox, we all have games in common. At Microsoft in general, I might have affinity with someone because we’re both women who work at Microsoft, but other than that we might not have anything else in common. But within Xbox, gaming is that unifying force. So how do we create communities within the gaming world? It might be around a type of game. It’s not always just about race, gender, religion, or whatever dimension of diversity. It’s creating a space where you can have both localized and larger groups, and we’re all going toward creating the best games.

Gaiser: We’re all leaders. The idea that the deciders know everything is a myth we’re all breaking down. We as leaders, all of us, it’s our responsibility to become inspired. Behavior is contagious. That’s all of our jobs. Getting rid of unconscious bias and using mindfulness techniques are first steps to being fully present and getting in the moment, so you’re inspired to inspire others.

Bellamy: Can you talk more about what mindfulness techniques are?

Gaiser: They’re daily practices – martial arts, meditation, yoga, many others – that slow down our brains and take us back into the moment, the way we were as kids. We lost half of ourselves when we moved out of the moment and went into analytical thinking, which is the way leadership runs – literal, logical, linear thinking. That may not include creative intelligence, which is sensing, intuitive, imaginative, and uses the heart.

With these practices, every day, all of a sudden your full human potential is there. You’re being your best self. That’s what inspires people. Then all of a sudden you’re connected. I was connected with my team. When the economy crashed, I crashed, and all of a sudden I watched the creative intelligence dissipate. I didn’t like myself. I felt half-full. That’s when I learned mindfulness techniques. I had to find a skill to keep myself in creative mode all the time.

What we do is have an open-door policy. That’s how I got to know everyone. They would come in with ideas. All ideas were welcome. The best ideas won. There were no stupid ideas. It just might not get picked. Then we played hacky sack every day. We all went outside at a certain time and played hacky sack. We let our guards down. We shared ourselves. We would all go around and if someone did something, if they were jazzed about it, they described it. There was recognition.

Those kinds of things, they support each other. It was so cool. When someone had a tragedy or death in their life, everyone gathered around and supported them and did little things for them. It became an immense positive energy, which is why I think we overcame all the obstacles we had. 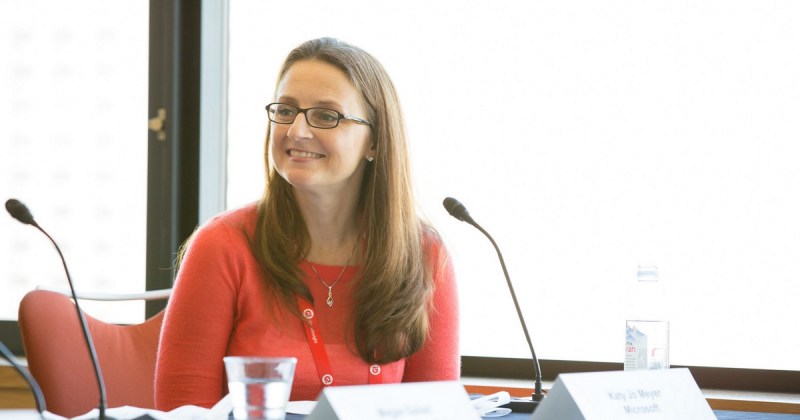 Above: Katy Jo Meyer talks about diversity on the Xbox team at Microsoft during GamesBeat 2015.

Bellamy: Going back to your point about being the only one, a number of resources exist inside our games community that people don’t all know about. You were super active in WIGI, for instance. Can we talk about some of the big organizations that exist? Because it can be super empowering to know that you aren’t the only anything.

Rasheed: When I first started in the games industry, we were the minority. Getting to know Megan was absolutely essential, because she was one of the only women in the industry. A friend of mine reached out to me and said, “Hey, I’m with WIGI,” which is Women In Games International.

When you talk about not feeling like you’re the only one, I felt like I was the only one. I remember going to a games conference. I was so intimidated by all the men there. There was myself and maybe one other women. I got a call later on from that mutual friend, Chrissy, who’s one of the founders and board members of WIGI, and she said, “I was wondering if you’d like to speak on a panel at Casual Connect?” Of course I was honored, even not really knowing—I was fairly new to the space then.

It’s because of her, because she opened that one door for me, that several other doors opened. When you ask, what’s our duty, what’s our job, that’s it. It’s not just about giving someone a job. It’s about empowering each other. If you haven’t been involved with Women In Games, get involved. We have chapters across the country and around the world. We need the support of other women and men, the entire industry, to help us reach where we’d like to be.

Gaiser: Gamergate. You brought that up at the beginning, so we’ll go there. As bad as that was, it was such a wake-up call for the industry. It brought women together. People like Dean, people who are leaders—Everyone has come together.

I want to call out how much Kate Edwards has done to us through Gamergate. All these people are giving in different ways. It’s amazing to see the power of collective intelligence moving us.

What we need to do, instead of feeling like islands—I felt like an island sometimes. But I found mentors and advisors, and they helped me. It’s all of our jobs to support each other and rise together. If we stay doing our own thing – how do I become successful? – then we just turn competitive. If we collaborate, we can all win.

It’s not just about money. The breadth of stories and wide-ranging characters that we’re still missing is leaving us with a dulling effect. We have a responsibility and an opportunity to inspire the game industry. Others will follow us.

Bellamy: For those who may be queer-identified or allies, we have an organization on Facebook. We used to be anonymized on a mailing list. We were closeted to each other on the internet. This is all of 10 years ago, too, not ancient times. Then we started to have secret closed-door meetings at GDC. This was before “it got better” and all that good stuff.

Now we have a Facebook group, though, so if you’re curious or know someone who might be, look it up. It’s called GGP. We just had our thousandth member join, which is awesome. It’s social, but it’s also about job development and culture and being allowed to exist in this context and in the context of GamesBeat.

I want to go back to Justin, because this is a whole new realm. I hope there’s a very powerful community growing around what we might call games for good. The power of discussions like this — it’s to make sure that it’s okay and of value that you’re coming from a diverse point of view, and that if you align with people who share that value, you can accomplish great things in our craft.

Just for takeaways — I want to return to tangible things that people can do. I see leaders out there – CEOs, executive directors, journalists. I wanted to give each of you the chance to give a takeaway item, maybe drawn from your experiences, that you want people in this room to know. Something that they can do that was born from your experience.