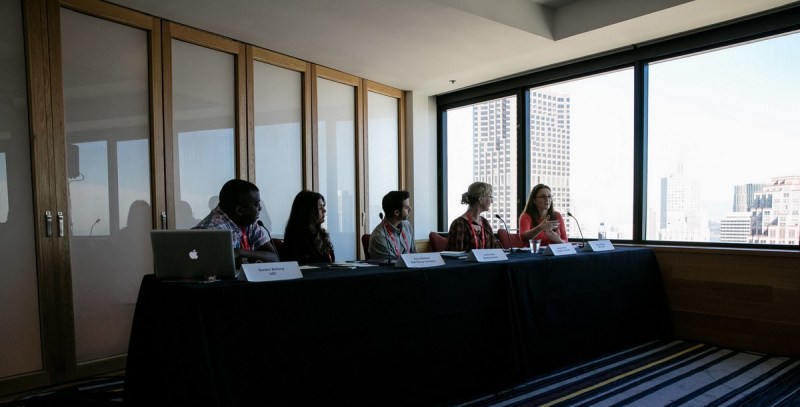 I strongly encourage everyone to own what you do. Be vocal. Whatever your identity is, it doesn’t matter. Know that you’re not alone. That’s the most important thing. You have so much support. Even if you’re in an organization right now, go to talk to people. Talk to your leaders. They probably don’t know how great you are. They probably do have their biases. It’s important for you to say, “Hey, I’m here. This is what I do.”

I will tell you, I did this over and over again, because I did have to prove myself. Unfortunately, we do have to prove ourselves. That’s the hard reality. I love to wear high heels. That’s who I am. That’s my message. You are who you are. It doesn’t mean you aren’t smart or knowledgeable. That’s the truth.

Hefter: My background is in business and in conflict resolution. I’ve spent a lot of time working with Israeli and Palestinian youth, people who are actually killing each other. That’s how heightened the conflict is, and yet games have brought them together. These kids are playing soccer and basketball together. They’re playing games online. We’ve seen the power of games to overcome conflict at that level.

We’re not nearly there in the games industry. Games can bring us together as well. We have a really diverse room, a diverse panel. We’ve come together because of our love of games. You guys are here because of your love of games. If there’s something going on that you want to change, game it out. Talk to one of your managers. Talk to a superior. Say, “Look, we have an issue in this company. Let’s build a game around it. That’s what we do. That’s what we love. Let’s bring each other together through games.”

Gaiser: One thing I would say is, when there are things you see in a company that aren’t working, go to whoever you can. Come from a place of curiosity to understand why it is that way. Then start recommending. Everyone needs to inspire not just games, but every aspect of business.

Find mentors. We’re all mentors. From my experience, learn how to embody the values of creativity – curiosity, openmindedness, kindness, taking risks in the face of uncertainty – and leading from creative intelligence, supported by analytical intelligence. It does take a perceptual and experiential shift. Mindfulness techniques, I’ve found, have allowed me to stay more present when fear happens. It’s either fear or love, in everything we do. That’s the direction we’re all headed in to transform this industry.

Meyer: One of the most important nuggets for us that we’re focused on is bringing intentionality into everything we do. With unconscious bias, that’s bringing intentionality to understanding what your own biases are, how they’re serving you, how they’re getting in your way. Anyone can go to Project Inquisit. It’s done by a partner, but it’s a free online test you can go through to find your own unconscious biases. I highly recommend it. We had all of our senior executive leaders go through it.

Awareness is the first step, but then it’s bringing intentionality and awareness to it in your day to day. It’s not a one and done, check it off, don’t think about it anymore. It’s bringing intentionality every day to how we operate, how we interact with other people, how we make decisions. Inclusion does not happen by default. Unless you proactively include, you’ll unintentionally exclude. There’s so much power in that. That’s something we’re trying to focus on – bringing that intentionality to inclusion. That’s where meaningful change is going to happen, change that’s going to show up in the products and experiences we create on an ongoing basis.

Gaiser: One thing that’s good to think about—We’re all saying the same things. But mindfulness techniques, learning to slow down our brains and be fully connected, that connects us together, instead of having bias toward others. That’s what it does every day. But it’s a daily discipline and a moment by moment practice to be thinking about our thoughts so we can change them. Thoughts are beliefs. Beliefs determine behavior. If we positively transform our beliefs, we can change our behavior for the better.

Rasheed: The big message here is that we’ve all become one big community in the game industry. Leverage that. Get involved. Get connected. It’s not men or women. We’re an industry and a community. Get involved and stay involved. Regardless of roles or titles, wherever we’re at, we’re still in this together.