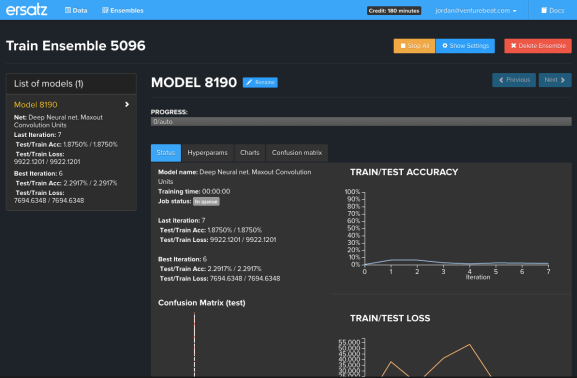 The startup has recently dropped its headcount from around 13 down to five—with three of those employees working part-time. Earlier this month, the company began focusing exclusively on consulting, which is what cofounder and chief executive Dave Sullivan was doing before he started Ersatz Labs in 2013.

There are other startups, like Clarifai and MetaMind, that offer cloud services for deep learning. The CEOs of both of those startups have PhDs and are widely recognized for their work in academic circles; both have succeeded in landing institutional venture capital backing for their startups. Ersatz by contrast, does not have any PhDs onboard; Sullivan is effectively self-taught, and he suspects that could be one reason Ersatz wasn’t able to raise funding. Hence the scaling back.

“We just don’t have a big enough team to make a real go of it,” Sullivan said of the cloud service during an interview with VentureBeat. With its smaller workforce and its complete dedication to consulting, the startup is now breaking even, Sullivan said.

One would think venture capitalists would be more interested in giving checks to startups like Ersatz. Apple is on an AI acquisition rampage. Google, Facebook, Microsoft, and Baidu are all building up formidable AI teams. Pinterest, Snapchat, Spotify, and other startups have considering using deep learning for certain purposes.

Deep learning involves training artificial neural networks on pools of data — such as images — and having the networks make inferences about new data. Interest in the field has accelerated in the past three years, especially after researchers discovered that GPUs could potentially perform these computations in a more economical way than standard x86 chips.

Some people think interest in deep learning will eventually die down and lead to another so-called AI winter, with young companies going out of business. “Today the cycle is likely to repeat itself again,” as New York Times reporter John Markoff predicted in his 2015 book Machines of Loving Grace.

Sullivan, of course, is more optimistic.

“We’ve got a pretty big pipeline at this point,” he said. “A lot of these companies just don’t have it in their budgets yet. Next year I really think a lot of people have money earmarked for these types of services, much more so than last year.”

Ersatz launched in June 2014 and is based in Pacifica, California, just south of San Francisco.