A whole generation of gamers have grown up and become esports fans without ever hearing the name Thresh — at least, not unless you’re referring to the League of Legends champion. Long before it belonged to this support champion, that moniker belonged to Dennis Fong.

In fact, the League of Legends champion is actually named after Fong, who is in many ways the father of modern esports. The Guinness World Records calls him the first professional gamer, and his legacy since the days of winning id Software CEO John Carmack’s Ferrari 328 in 1997 is a lengthy list of accomplishments in the business of gaming.

A gamer turned CEO, Fong’s resume is impressive — an unprecedented (and perhaps unmatched) career in competitive first-person shooters (FPS), a media company that Ziff Davis bought, and the once immensely popular Xfire game server browser and instant messaging service. Today, he continues to own and run Raptr, a gaming optimization software company he founded in 2007.

I sat down with Fong because his reputation as a pillar of the pro gaming community (since long before we coined or started using the term “esport”) preceded him. I wanted to pick his brain about the future of esports — how this burgeoning industry might grow, where it needs to go next, and what will stand the test of time. We also talked about his most recent project, Plays.tv, which GamesBeat profiled when it was announced back at the end of March.

Taking esports into 2020 and beyond: the need for highlights and moments

Right out the gate, I wanted to get Fong’s own take on his relationship with the esports industry. “I was one of the first, if not the first, pro gamer. Back in the mid- to late-’90’s I was sponsored by a bunch of different companies and making over $100,000 a year when there was really no one else making any kind of money.” Fong isn’t being pretentious about his auspicious start — he recites these numbers without even thinking about them. He’s told his story a thousand times.

“Every company I’ve started solved my own personal frustrations as a gamer,” Dennis said. He uses the now-defunct Xfire as an example. “You’d have to use GameSpy Arcade or some kind of server browser, cut and paste an IP address, and message it to your friends to hopefully get into that server before it was full. That’s what Xfire was designed to solve. It made the experience more social.” 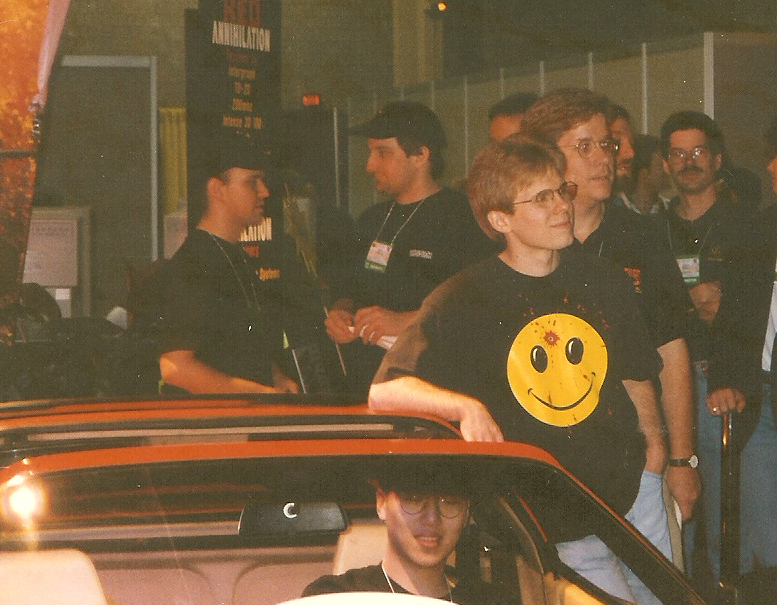 Above: Dennis “Thresh” Fong sits in the Ferrari 328GTS convertible he won in the Red Annihilation Quake Tournament at the 1997 Electronic Entertainment Expo (E3).

It sounds cliche now, but this was the era when Facebook had only barely become a public website. Finding your friends when they were playing a game was a challenge — for sake of argument, Blizzard only introduced its Battle.net app and cross-platform system in 2013. The vision Dennis had was ahead of its time.

His newest project, Plays.tv, is an extension of the Raptr game optimization system. Raptr had allowed for game footage capture, but those clips weren’t being shared, because at the time, no real place existed to take those moments to share them with your gamer friends. Dennis put it more simply:

“I want to be able to relive and share moments with a like-minded community of people. Plays.tv was really designed to share and capture those things.”

I wasn’t previously familiar with Plays.tv, so I had to ask — what was it going to do for gamers and the gaming community?

You could hear the energy as Fong described it. “The fun is really centered around these moments that we experience as we play. Without a service like Plays.tv, it’s just a memory.” I instantly think to lengthy text message conversations with friends about recent Hearthstone games, or trying frantically to describe big plays on a forum or Reddit. He’s got a point.

“It’s kind-of like a video based replay system that works for every game. The hope is to turn it into something that’s social and fun,” he said. In my head, I’m already drawing comparisons to Instagram — but for sweet gaming highlights.

Plays.tv is new, but Raptr really isn’t — he says that it has 65 million users. Fong goes on to tell me that no significant promotion of Plays.tv within Ratpr has happened yet (although that’s coming soon), but League of Legends and Counter-Strike: Global Offensive pros are already all over it. “For those kinds of guys, it’s a really powerful way for them to continue to build their brand with their fans when they’re not streaming,” he said. “Streaming is a huge commitment of effort and time.”

The Plays.tv client has built-in features for LoL and CS:GO, with Dota 2 following close behind. For other games, a quick hotkey bookmarks a moment in your video timeline to jump back to later. 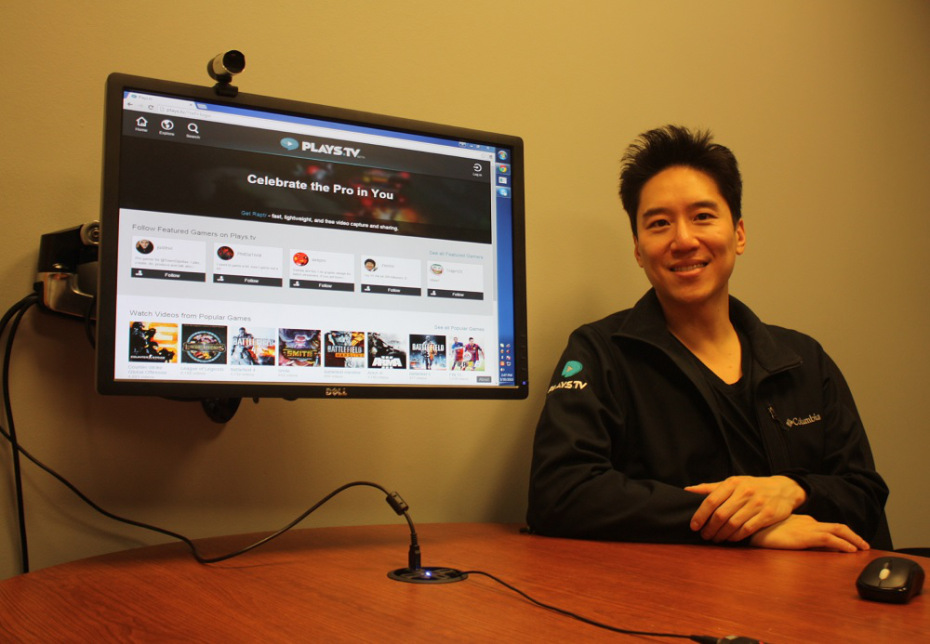 Above: Fong showcasing Plays.tv to GamesBeat.

We don’t need television — but the market does

Plays.tv may sound cool, but I’m here to talk to Fong about esports. As someone who has watched a hobby become a job become an industry, his vision of the future intrigues me — and it’s incredible.

When I ask him where he sees us five years from now, he’s optimistic beyond my wildest dreams. “It’s going to be ubiquitous, and it’s happening at a very quick pace,” he said. “Hollywood is getting involved, esports are being broadcast on TV, ESPN is covering esports — but it’s still pretty early, and I think it has a lot of room to grow.”

He’s got valid criticisms as well. When we talked about players, he refers to opportunities for pros to improve the way they carry themselves and the relationships between players and sponsors to be more professional. It’s all optimism with this guy, though. “All of that evolution seems to be happening. Some day in the next five to 10 years, esports will be on top of the world,” he said. “Riot — or someone — will be able to sell their broadcast rights for over $100 million.”

For myself, I’m vocal — perhaps to a fault — about how much emphasis esports as an industry places on sponsors and sponsorship dollars. Fong agrees. “I don’t think if any sport was reliant on just sponsorships that they’d make it,” he says. You hear a little bit of California bias slip out when he starts talking about seeing esports on a day-to-day basis, though. “You look around and see TSM hoodies and Cloud 9 hoodies — it’s not some weird thing,” he said.

We agree to disagree on this one.

Fong isn’t done on this televised esports topic, though. What he had to say about getting esports on to TV actually opened my eyes to the other side of this conversation:

He’s right. Being on TV isn’t about making it as an industry — esports has, in many ways, already “made it.” It’s about finding ways to interface with the marketplace that developers, teams, and players all want to find ways to touch; about seeing Faker sign a Nike shoe deal, instead of Michael Jordan.

As a loyal StarCraft fan, the next question I asked Fong hit close to home: How do we get esports fans to enjoy “esports” itself, not just the lone game they might play or follow? His said it’s about persistent genres.

“The strategies, the game, the skills — for something to be a spectator sport, you have to at the bare minimum as a spectator know the basics of the game,” he said. “You need to understand and appreciate what people are doing on screen.”

He compares League of Legends to the old Warcraft III Defense of the Ancients mod, CS:GO to the original CounterStrike, and Hearthstone to Magic: The Gathering. “Those games have been around for 15+ years. I could watch CS:GO and instantly recognize epic rounds, because I played the original CS back in the day. The games that have a shot at becoming the next eSport are games that are really grounded, or have been around for a long time,” he said. “The upcoming Unreal Tournament or Overwatch — Team Fortress 2 brought into the new age — those are the kinds of games, in my opinion, that have the potential to transcend and become the next esport.” 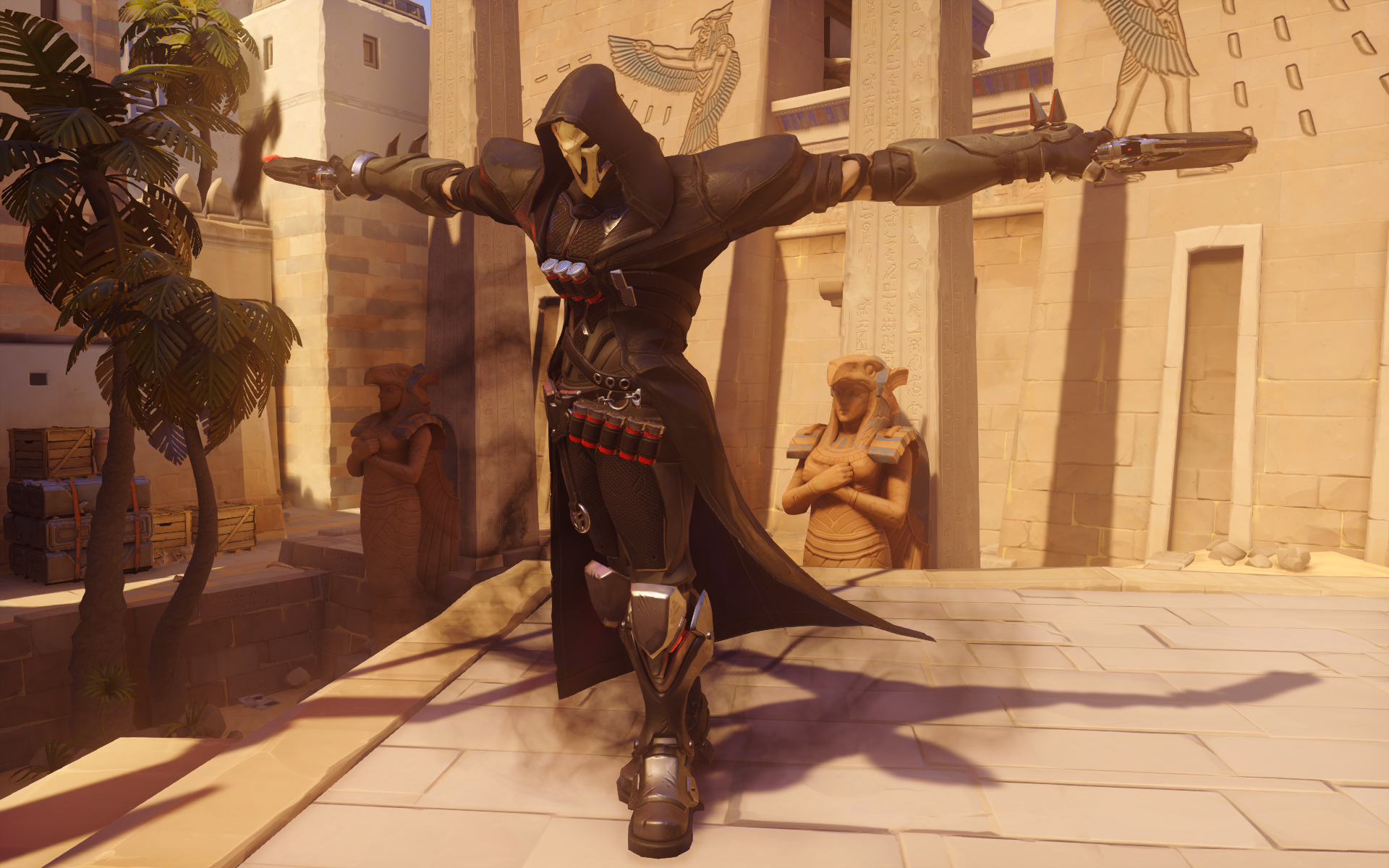 Above: Overwatch could be Blizzard’s next esports hit.

Given all of his insight, I have to ask Fong about infrastructure and next steps for esports. Things have changed since his days — he gives nods to sponsorship monies, player salaries, minor league systems like Challenger, and monetized fanbase platforms like Twitch and YouTube. He loves that players aren’t just a name any more — they’re personalities you can watch and interact with.

His hope for the next steps is that video coverage improves. “There’s a reason why ESPN exists for sports. You want things to be given to you — it’s easier and more entertaining to follow things in bite-size chunks and highlights,” he said. “Not everybody can watch a livestream; not everybody wants to watch hours of video on demand.” I can see how he arrived at the necessity for Plays.tv in this line of thought.

I ask if he has any advice for us — the average esports fans. His answer is perfect:

“Be positive. It’s great that people are super enthusiastic about esports and the respective teams and players, but the community can be harsh and incredibly negative. It drives people to retire early, makes people’s lives stressful – no matter how good or bad a player plays in an important match, they put their heart and soul into it.

“It’s great to be passionate and enthusiastic, but try to do it in a positive way.”

That’s the legacy that the world’s first pro gamer wants to leave.