Instagram has launched a new video channel that will feature curated photos and videos from users focused around specific events. Available through the photo sharing app’s Explore tab, the feature looks eerily similar to Twitter’s Moment offering, or even Snapchat. Naturally, the first album, if you will, is dedicated to Halloween.

First reported by Wired, this feature opened up today for users in the U.S. When viewed, it will showcase the “best videos” that users have posted on the service. It’s said that an editorial team at Instagram will play a part in choosing what’s featured. You can cycle through different video clips (they auto-play), and if you’re interested in the creator of that piece of content, you can tap on their username and go directly to their profile or to that post.

Of course if you like a video, just double tap the photo to “heart” it. 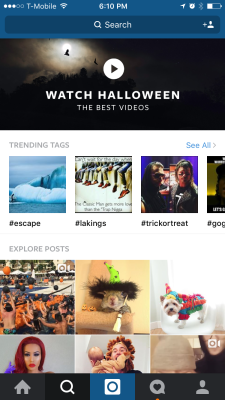 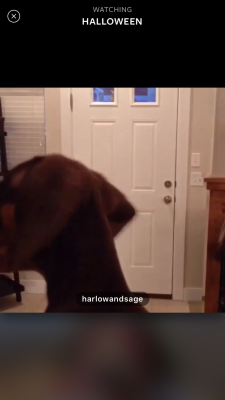 Instagram said that there are 80 million photos shared on its social network every day, but hasn’t revealed how many videos are posted.

Although only one video album is currently displayed, it’s likely that others will soon be added, including those around politics (wait for the next Democrat presidential debate), the World Series, protests and rioting, Thanksgiving and other holidays, or anything major taking place around the world.

But in the meantime, if you’re still out trick-or-treating or are planning to, you can plan ahead and see if one of your Instagram videos gets chosen. Wired said that you can submit your post by using the hashtag #IGHalloween and the company will evaluate it.

It’s also quite possible we will see Instagram eventually incorporate ads into these channels, much as Twitter is doing through its recently introduced Promoted Moments. Currently, the company told Wired that it has no plans to open its channel to advertisers — it will likely take the time to review the situation in order to not compromise the user experience — but as it continues to expand its advertising offering, the introduction of ads is probably only a matter of time.

Two years ago, Instagram debuted its video capability to the world, allowing users to assemble 15-second clips that rivaled Vine and other competitors. With Instagram videos, users can now take a video, apply a filter, and share it with the world. This new channel will give some of the best of those videos an even better chance of being discovered while encouraging users to discover new feeds to follow.