This is when Sony and Microsoft bring out the big guns and try to tell as many consoles as possible. However, Microsoft is coming out especially aggressive this holiday, thanks to big releases like Halo 5 and a large selection of bundles.

We got to talk to Aaron Greenberg, who leads the marketing team for Xbox’s first and third-party games, at Microsoft’s headquarters in Seattle. We discussed the company’s holiday strategy, which attempts to differentiate itself from its competitor, Sony’s PlayStation 4, by focusing on a strong first-party line-up and introducing a high-end controller designed for serious gamers.

Greenberg also told us why consoles are healthier than ever, despite warnings from some that the traditional console market is nearing the beginning of the end. We also learned the thought process behind making all of those bundles Microsoft is creating for the holidays in an attempt to attract new consumers.

GamesBeat: How did the bundle philosophy become so prevalent at Microsoft?

Greenberg: Every year we end the year and we look back and say, hey, what have we learned this previous year? One thing we learned coming out of the last holiday was that giving customers more choice and more offers with bundles was a good thing for the business.

Customers responded well. When we launched new bundles, like when we did the white Sunset [Overdrive] bundle, we saw a jump. When we did the Call of Duty bundle we saw a jump. This year, we started to plan and we had two things. We wanted to offer customers more choice, so whether you’re a fan of Madden or FIFA or Tomb Raider or Lego — something more family friendly — we have an option for you.

The other piece is that we frankly have so many games this holiday that we want to take advantage of that. We want to give customers choice, but also give them great value with all the big games that are launching. That allowed us to do more bundles than we’ve ever done in the history of our business.

GamesBeat: What’s the thought process when you make a bundle? Is it about specific games? Or is it more about themes? What attracts people to a bundle?

Greenberg: There tends to be two big buckets. One is the limited edition consoles, where we do a really neat design. Those are much harder to do and cost a lot more money and take a lot more time. We have to qualify them so that they can be manufactured a certain way. Depending on who is the owner of the IP, if it’s a third-party partner, we have to work with them on a lot of approvals. If it’s an internal team like the Halo team, we work closely with 343 on the Halo bundle. It’s a longer process. Those are more special. We tend to limit how many of those we make. They tend to be premium priced, limited edition products, like you see in all different types of industries.

The other bundles tend to be what we consider value bundles. If people are looking to buy an Xbox One, often they’re timed with the release of a given product. We have the Tomb Raider bundle coming. We had the Madden bundle when Madden launched. If you’re in the market for an Xbox One and you can get that game for free when that title’s launching, that’s a great value. If you’re trying to decide which console to buy and you know you want to play Madden, the Xbox One has Madden included for free. We see that does drive preference and share for us.

The other piece there is that we want customers, when they do buy an Xbox One, to have a great first experience, a great game out of the gate. Giving them a triple-A game like that is great. If you look at other things where it’s like, hey, we’re looking at holiday, whether it’s Black Friday or the week after Christmas — when people have heavy gift-giving, that’s where, If you look at our Holiday Value Bundle with Ori, Gears [of War Remastered], and Rare Replay as an example, that’s an example of an amazing amount of value. They’re all great games. If you have teenagers or older gamers in your home who want to play Gears, that’s great. Ori is great for all ages. Rare Replay the same, largely for all ages. It’s something for everyone.

Above: Xbox One Elite bundle.

GamesBeat: Is that, the Holiday Value Bundle, being positioned as the big holiday bundle, if you’re not specifically into one game?

Greenberg: You’ll see that we’re not selling Xboxes without any games attached. We want people to have a great value. We want to be competitive on value. That one I think is probably our best competitive value SKU. They all have different volumes. That one we’re making quite a lot of. We expect that to be a big seller this holiday. It’s our lead value bundle, if you will.

GamesBeat: How did you pick those three games to include?

Greenberg: We evaluate all the different games. It has to work financially. The games have to be high quality. We have to feel like the appeal of that offer will resonate with customers. Looking at all three of those products, those were games that were highly rated, that we think will be a great value. To be able to come back and put all those together is pretty impressive.

We have to work with the teams that manage those products internally to make sure they’re okay with the offer. But all the teams are supportive. We’re pleased we’re able to make it happen. Sometimes you try and it doesn’t work out, but in this case we were able to put together a pretty competitive bundle offer. 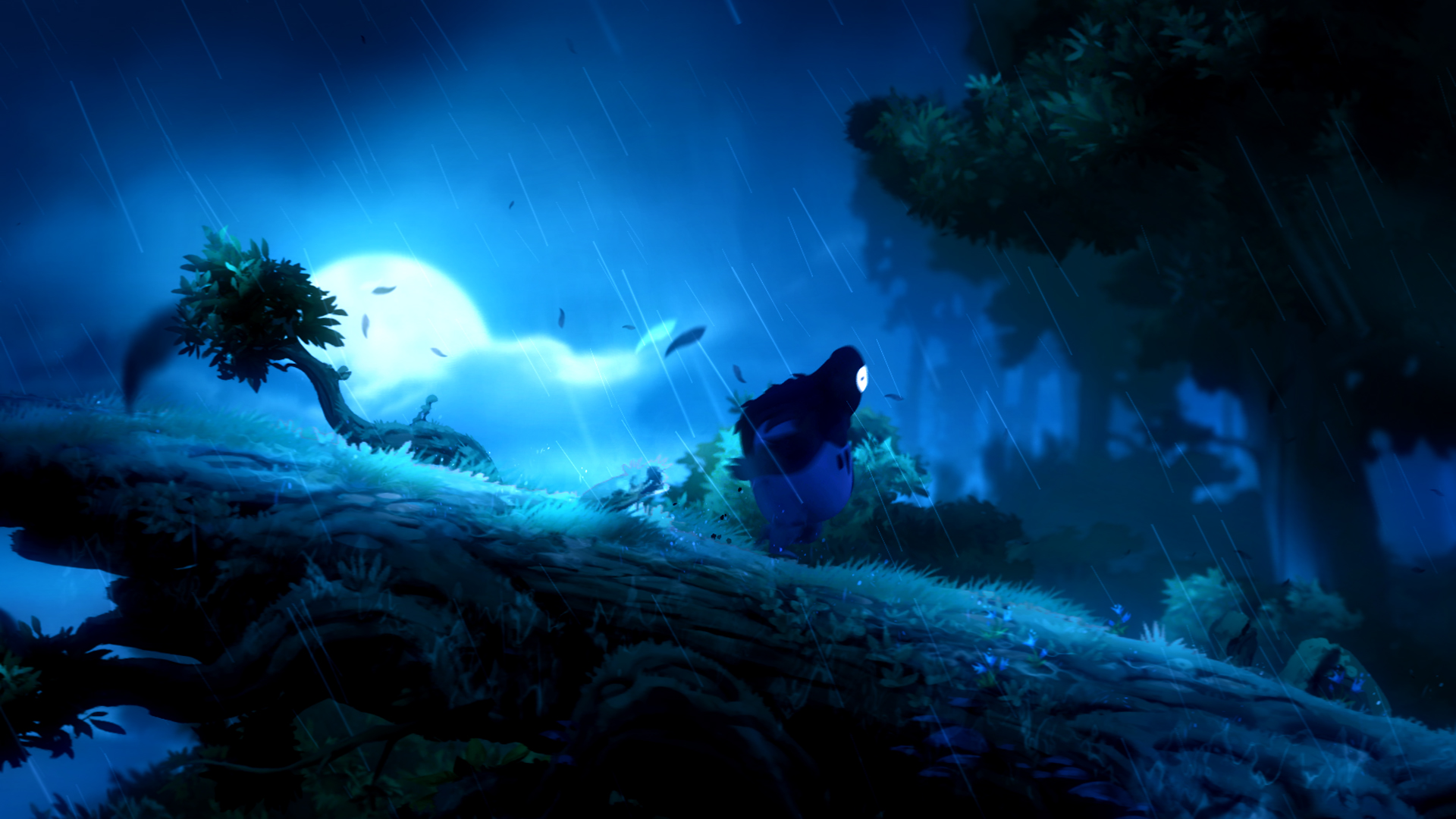 Above: Ori and the Blind Forest.

GamesBeat: I played Ori when it came out. That was one of the most stunning games this year. Has that been performing well for you guys as a digital exclusive?

Greenberg: It did very well for us. The game was a small title from an investment standpoint, a small team at Moon Studios. Those guys have been great partners. We were very pleased with how well the game sold. With a lot of those digital games, though, over a period of time you eventually  — they’re no longer front of mind for people. The challenge for us is, how do we make more people aware of them and let them get access to such a great game? It was one of my favorite games of the year. Being able to bundle it, ideally millions of customers will now play it. It’ll allow people to access that franchise who might never have played or bought the game. That’s a good thing for us and for Moon Studios and for that IP.

GamesBeat: What about Rare Replay? How has that been doing? It’s kind of a crazy endeavor, getting that many old games together.

Greenberg: I remember being out at Rare — I was there last week with the team. We talked a lot about it. But I remember sitting down with them a little over a year ago and talking about their 30th anniversary and what we could do that would be special. They had this great idea, to pull together this amazing collection of games they had in their archives. Getting down to 30 games was probably the hardest part. They have these stacks and stacks of cards with the product description on one side, like the single laminated sheet equivalent of box front and box back for every game they’ve ever made. We spent hours getting totally distracted by that, reliving our childhoods. Above: Enter the theater of Rare Replay.

Then we got down to, okay, what are going to be the 30 big games we think can drive here? It was something they had — it was a labor of love for them. You could see all the video bonus content and the making-of stuff. Even some of the unfinished things they included I thought just made it a great value. We worked with them on, hey, what’s the right number? How do we think about pricing this? The 30 years, 30 games, 30 dollars felt like the right place to land. We looked at other compilations and how they performed. But for us Rare Replay did a couple of things. It was the first title in our holiday lineup, starting in August, what we consider the greatest games lineup in Xbox history. Kicking that off it did a great job.

The title’s done very well. It’s way ahead of forecast. It’s selling extremely well. Ratings were really high. In fact, the first week we launched the game, we had stock outs at retail. We had to chase demand on the physical version of the game. We’ve been pleased with that. We had a great review with the team. We’ll continue to promote and do things with the title so more of our people can — we think it’ll be a great — all the new console buyers this holiday, come January, after millions of people have bought Xbox Ones and they’re looking for — what’s a great game to add on? I think it’ll be one of those titles people will want to buy. It’s evergreen to me. I can always go back to it. Whenever I want to play Conker or RC Pro-Am or Battletoads, there’s something fun there for everyone.