Capcom producer Yoshinori Ono should just be nicknamed Yoshinori “Oh no, not this shit again!”.

The public-facing spokesperson for the Street Fighter fighting game series is known for pulling elaborate visual pranks on the fan base, and his presentation on Sony’s stage during Paris Game Week didn’t see a break in his routine.

During his announcement, in which Dhalsim was revealed as the next character in Street Fighter V (even though the fighter was leaked several hours before the show), Ono also revealed that six unlockable characters would appear in the game during the product’s first year.

As Ono made this statement, a teaser image flashed on the big screen showing the silhouette of six new challengers. The fighting game community has been buzzing — and arguing — over who these six characters are. I decided to play into Ono’s game myself and toss out some of my theories on who may be represented here. 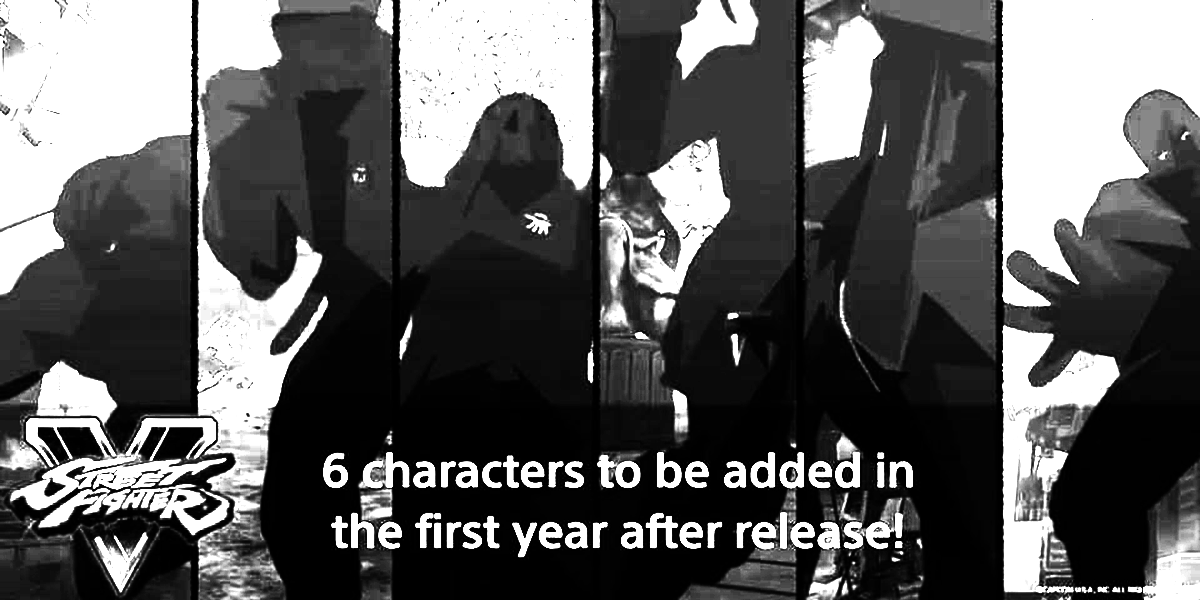 To do this, I took the teaser image and desaturated it. Then I played around with the levels and contrast to try and blast out the background and pull in as many details from within the silhouette as possible. A good chunk of a character’s success from a visual design standpoint is in creating an identifiable and vibrant silhouette, something that Capcom had a legacy of doing very well.

The thing is, we’re talking about Ono here. This isn’t the first time he and Capcom have pulled some visual slight of hand to throw fans off an upcoming character announcement. So who knows what will change in this picture come the character reveal … or if any of it can be taken as gospel.

Still, let’s have a little bit of fun and dive in anyway!

The large, knuckled ham-fist raised up in a Western-style fighting position, the wide-legged stance, the upper body leaning forward — this is definitely Guile’s fighting stance.

There’s also a hint of the hairline on the borders of the image heading upward at an angle, suggesting the beginning of his signature broom top hairdo.

Even the light planes in the face area evoke an image of his heavy brow and pronounced nose. It’s like spotting the Virgin Mary in burnt toast, in that I don’t think that’s what those shapes are supposed to be. They seem a tad low, especially when I compare them to what appears to be his right ear. Unless he is seriously ducking his head down at a weird angle.

The symbol on the chest of a star and a set of laurels is a big clue, but looking through my Capcom art pile, I don’t see anything resembling that emblem. It’s not the symbol of the United States Air Force, which looks more like an origami eagle.

That first picture is as easy as these guesses get. Prepare for a lot of eye squinting and comparing pictures.

The first most noticeable feature is the contrasting white triangle that looks like a set of kunai (throwing knives) strapped to her body. There’s also the suggestion of Ibuki’s hair, which features a long, sharp dangling bang, which may be appearing just at the top between the face and fist of the picture.

The huge forearm shape, usually accentuated by a pad, attached to an exposed smaller upper arm construction is very similar to Ibuki’s visual design. There’s also the roundness of the upper leg of the pants, followed by the folds of the lower leg.

The thing that is bothering me here, however, is the stance. The way the leg is turned, pushing the back of the calf muscle outward toward the opponent, is not characteristic of Ibuki at all. It actually resembles Japanese school girl Sakura‘s (Street Fighter Alpha 2, Ultra Street Fighter IV) fighting stance. I sense an Ono visual mind game going on here. Maybe, just maybe, what looks like the kunai is actually the sharp folds of Sakura’s skirt, and the folds on the lower leg are knee-high socks?

This could easily go either way.

A lot of people seem to be convinced this is Boxer (Street Fighter II: Championship Edition, Ultra Street Fighter IV). Who is Boxer? Balrog in the United States, M. Bison in Japan. It’s just become a thing in the fighting game community, which has become much more international these days, to refer to this character as Boxer.

So, is this Boxer? Maybe. Part of the case being made is that the hairline around the forehead is a match. Also, if you look closely at the chest area, you can see a black shape popping out that is running over the bottom portion of his face, suggesting something like a boxing glove is in the foreground. There’s also the suggestion of shorts near the bent knee, which Boxer definitely has.

My problem with this theory is that we have to ignore the shape that appears behind the head, which looks like more hair bundled up in a pony tail. If that shape behind the head is actually his shoulder, then he has some serious body deformation issues going on.

The pony tail is making me lean toward Blanka (Street Fighter II: The World Warrior, Ultra Street Fighter IV). Blanka’s visual design fits the broad shoulder look that’s going on here. He has a somewhat similar hair line and has a costume where his hair is tied back. The green beast also rocks similar shorts, and the stance is definitely Blanka-like in nature.

But it’s also a stance I could see Urien (Street Fighter III: 2nd Impact, Street Fighter III: Third Strike) pulling. I think the likelihood of this being him, however, is less than 1 percent. I mean, would he really upgrade his thong to a pair of shorts? Probably not.