“More flexible regulations [will help] to unleash the creativity of [South] Korean citizens,” Google’s former chief executive Eric Schmidt said during a visit to Seoul before the weekend.

“Regulations often hold progress back. The secret to the Internet was that it was not regulated,” he added.

South Korea is in the midst of a protracted economic slowdown, with its government now seeking to implement further deregulation in an effort to stimulate the economy.

That’s the context in which Schmidt’s comments are to be taken. “I know that your country is seeing an economic slowdown,” he told the audience during his visit, before recommending further deregulation in the tech space — not just in areas like employment and finance.

During Schmidt’s trip — his first to South Korea since 2013 — Google announced a new partnership with the country’s largest science museum. The partnership, which is funded through Google.org, will provide a “kids’ makerspace.”

Children will be able to engage in different workshops and activities, “From creating a stethoscope that can measure and convert electric resistance of various objects to sound, to making a model of a friend’s face using black strip resistor and LED lights,” Google’s country director for Korea, John Lee, wrote in a blog post.

Google has been pretty active in the country of more than 50 million this year. It opened Campus Seoul, its “first community space for startups in Asia,” and also announced a partnership with South Korea’s National Hangeul Museum, offering another interactive space for kids.

Next year, the company is due to open a 2,000-square-meter outdoor “science playground” at South Korea’s Gwacheon National Science Museum.

For Alphabet (Google’s newly formed parent company), the big priority in Asia at the moment seems to be around how it can get back on good terms with the Chinese government — and once again do serious business in China — after it largely pulled out of the country in 2010 over cyber attacks and censorship issues.

This trip, though, was a nod to South Korea, letting the country know that Google has not forgotten about it — and an opportunity to deliver a reminder to everyone about the importance of a free and open Internet. 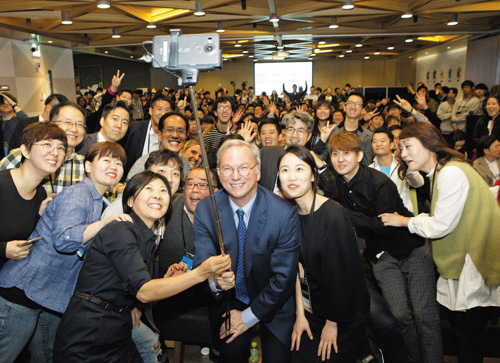 Above: Google cofounder Eric Schmidt on his Seoul visit before the weekend