Nexon is a pioneer of free-to-play online games in Asia, and it wants to break into the West in a big way.

A couple of years ago, the Tokyo-based, South Korean-born company appointed Owen Mahoney, a former Electronic Arts executive from the U.S., as its CEO. And he has been on a quest to sign up as many third-party Western game developers as he can to help Nexon expand into the global $30 billion mobile gaming market, as well as the online gaming market worldwide.

And he’s not signing just any developers. Nexon has concluded deals with Titanfall maker Respawn Entertainment (and its mobile studio Particle City); Big Huge Games, an independent studio cofounded by PC game industry veterans Brian Reynolds (Civilization II) and Tim Train; Shiver Entertainment, a studio started by former Zynga executive John Schappert; and Cliff Bleszinski’s and Arjan Brussee’s Boss Key Productions, which is making an online shooter game called LawBreakers. Bleszinski is one of the most notable developers of shooter games in the world, working on

Mahoney has had luck getting these deals because his view of gaming is similar to those of seasoned developers. He views games as an art form, and he explained his strategy in a fireside chat with Mike Vorhaus, president of Magid Advisors, at our GamesBeat 2015 event.

GamesBeat: You’ve been at Nexon for four or five years now, and you’ve been the CEO for the last couple of years. You had a couple of big transactions during your time. What about Nexon made you want to go there? How are you seeing things shape up?

Owen Mahoney: By way of quick background for the people in the room who aren’t familiar with Nexon, because we’re relatively small in the United States, we were founded in Korea. We moved our headquarters to Japan about 10 years ago. We’re headquartered in Japan now and listed on the Tokyo stock exchange. We listed in the end of 2011. We do about $1.8 billion in revenue every year. We operate around 35 percent or so operating income margins.

Our largest region is China. Our second largest is Korea and our third largest is Japan. U.S. and Europe together make up less than $100 million of our total, so they’re small as a percentage, but they’re both growing very quickly. That’s the background on us.

You mentioned Pointcast. When I was at Pointcast I met the founder. They were in a room, the whole company, about the size of four times this table. It was really small when I visited them. When I joined EA in late 2000, by then they had become the second largest game company in Korea. We’re now the largest in Korea.

What impressed me so much when I visited them from EA was—again, this is dating me a little bit, but it was late 2000. EA had invested several hundred million dollars, about $400 million, in a very smart idea, which was that the internet was going to change the games business. We laugh at this now for being so blindingly obvious, but in those days EA was the only large company thinking about this in a very forward way. 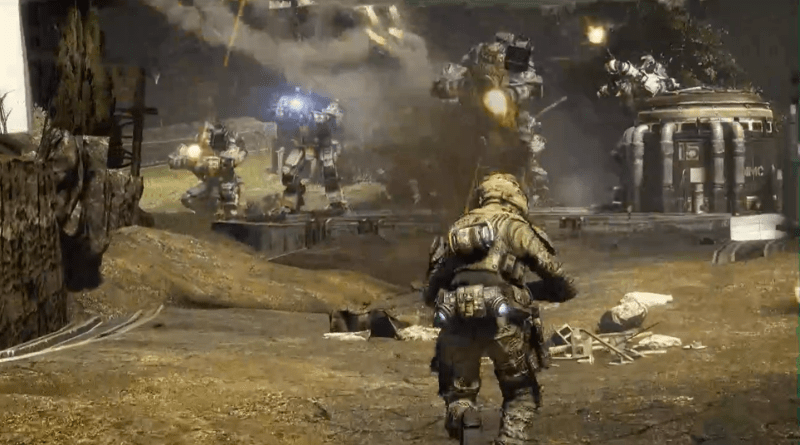 Above: Titanfall for Xbox One.

The problem and the challenge was that if you didn’t have a lot of experience online, it’s very hard to change the core of your company from a packaged goods business to an online business. Nexon was one of the few companies around the world that was very forward thinking. What they showed me the second time I visited them in 2000 really blew my mind. It was incredible creativity. Not around graphics fidelity and polygons on the screen and story, but about setting up gameplay that was fun, easy to learn but very hard to master, between thousands of people in their country at that time.

Korea itself was of course way ahead of the U.S. and Europe in terms of online gameplay. And still is, in my opinion. It was very fast broadband, very cheap, and everybody had it. It reached saturation of about 45 million people, the total number of the population in Korea, somewhere around 2004 or 2005. 100 percent saturation. Every man, woman, and child has broadband. It was way ahead of the United States, and it was very fast broadband.

Nexon, NCsoft, a lot of the game companies that were early pioneers were way ahead in their thinking. That got me very interested. I tried to buy Nexon at that time. Jay turned me down. Invited me to come over and worked for him. I turned him down.

GamesBeat: You don’t want to tell us the price, by any chance?

Mahoney: No, I don’t. You would throw me out of the room, as a businessperson. Later on I tried to buy Nexon again and Jay invited me over again. Late in my time at EA, around 2009, we tried again, and he said, “Thanks but no thanks,” and invited me over. By the fourth time I lost, or won, or whatever the case may be, but I came over to Nexon. All along what impressed me about Nexon was the very forward thinking about online specifically. 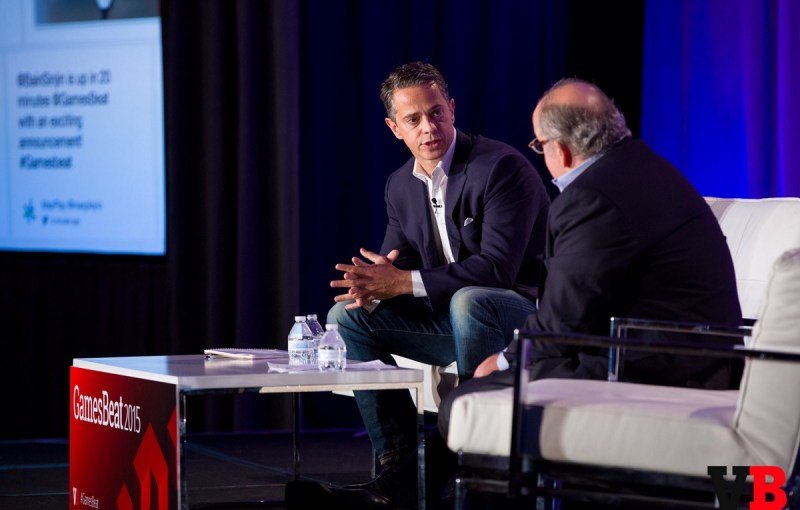 Above: Owen Mahoney [left] is CEO of Nexon. He is talking with Mike Vorhaus of Magid Advisors.

Image Credit: Michael O'Donnell/VentureBeat
GamesBeat: Building on top of that heritage, what’s your strategic plan over the medium and near term?

Mahoney: We come at it from a very particular angle, which to game-makers and a lot of the people in this room would seem very obvious. But to a lot of the games industry, particularly recently—unfortunately a lot of the games industry, in our opinion, doesn’t think this way. But the core principle is that games are very much an art form. If you want to build a game company that’s sustainable over time and that grows over time, you have to build great game art.

The core factor that you judge a game on is whether it’s fun or not. It’s that simple. Like all art, you sort of know it when you see it. You think about the game when you’re not playing it. You want to play the game again. You enjoy talking about it with friends, like all great art. But unlike other game art, particularly online games, it’s the one art form where you write your own story.

Other art, like books and music and movies and so on, they will tell you a story and you sit and watch what some screenwriter and director have given you. In games, particularly online games, on PC and mobile, any other platform, the game emerges from the gameplay between the players. Those are the games we like.

Again, that seems blindingly obvious. Unfortunately we don’t meet a lot of companies that talk about it in the way we think about it. That’s number one. The other thing about online games is, it’s actually really hard to do live game operations and live game development. Building a game so it builds up over time. The technical aspects of running a client-server system that can support gameplay, particularly in an MMORPG or a sophisticated game, is actually very hard to do. And so that’s an expertise we’ve been able to build up.

The other aspect is live game development. If you want to build a game that, like many of our games, has gotten bigger and bigger over a period of more than a decade, you have to invest a lot in live game development, putting new things into the game. Many companies have not realized this, which is why their games tend to blow up quickly and then go down.

A lot of what we’ve been doing in the last year and a half since the new management team took over is to sort of sweep out the brush that had developed and then go back to that core. That’s a very strong core. It’s proven itself over and over again. The companies that we respect around the games industry, in Asia and in the west, tend to have that same orientation, and they’ve been able as a result to build up their companies in a very healthy way over time.

GamesBeat: I love the fact that you think of yourself a story platform versus a storyteller, what all the other media are.

Mahoney: That’s the best part of the games business. It’s what I love about the art form.