Call of Duty, World of Warcraft, and Candy Crush Saga — three of the biggest games in the world, all catering to different platforms and financial models — now all belong to Activision after the publisher spent $5.9 billion to acquire King Digital, the company best known for the Candy Crush and Farm Hero games. This means that Activision paid $18 per share, or a 20 percent premium over King’s closing price on October 30, to acquire the mobile behemoth. This purchase should help Activision diversify its business. It was already making a push into mobile and free-to-play, but this move instantly adds a number of high-profile and lucrative hits. Instead of trying to build mobile games that appeal to a global audience, it can just use what King has already created.

This isn’t the only blockbuster deal in the recent gaming history. In March 2014, Facebook acquired the virtual reality company Oculus VR for $2 billion. In August 2014, Amazon bought Twitch for $970 million. In September 2014, Microsoft spent $2.5 billion for Minecraft and its developer Mojang.

But only one other game deal really comes close to this one, and that’s when Activision merged with World of Warcraft publisher Blizzard back in 2008. Estimates put that deal at approximately $18.8 billion.

“The combined revenues and profits solidify our position as the largest, most profitable standalone company in interactive entertainment,” Activision Blizzard chief executive officer Bobby Kotick said in a canned statement. “With a combined global network of more than half a billion monthly active users, our potential to reach audiences around the world on the device of their choosing enables us to deliver great games to even bigger audiences than ever before.”

While Kotick points out that having control of King puts Activision well ahead of its primary competition of Electronic Arts and Ubisoft, he will also let his new microtransaction factory continue to operate as a separate subsidiary. The current leadership of chief executive officer Riccardo Zacconi, chief creative officer Sebastian Knutsson, and chief operating officer Stephane Kurgan will continue to oversee King.

“Riccardo, Sebastian, and Stephane are some of the best minds in the business,” said Kotick. “Activision Blizzard will provide King with experience, support, and investment to continue to build on their tremendous legacy and reach new potential. We share an unwavering commitment to attracting and developing the best talent in the business, and we are excited about what we will be able to accomplish together.”

This is an enormous deal that shakes up the gaming landscape. Prior to this acquisition, both Activision and King were among the 10 biggest public companies in terms of game revenues, according to intelligence firm Newzoo. 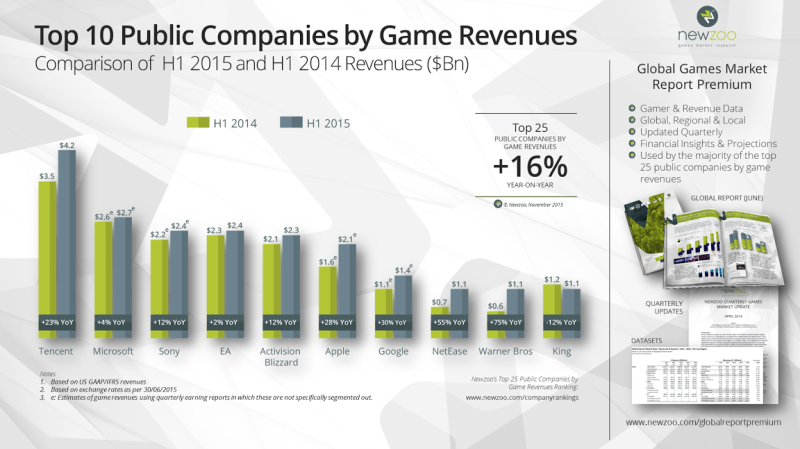 Above: Lots of growth.

The above list of companies tells a pretty clear tale: the companies most capable of developing for multiple platforms stand to make the most money.

Tencent, a Chinese Internet giant, outstrips all other gaming outfits thanks to its investments in game-making tool company Epic and free-to-play competitive PC game League of Legends. Tencent also has a strong mobile business where it runs its own mobile store and publishes games throughout Asia.

Electronic Arts, which is trading near its all-time high at $72 per share, is surging in value because it has slowly built up a similar model. It owns its own game-development tools. It has some of the biggest releases in the world with Madden, FIFA, and the upcoming Star Wars: Battlefront. And it has a fast-growing mobile business that it developed from nearly out of nowhere. Last quarter, EA made $113 million from its mobile business, which accounts for about a quarter of its digital sales.

Activision now has a similar level of diversity. It owns World of Warcraft, the world’s biggest subscription-based massively multiplayer game, and Blizzard’s fleet of free-to-play PC online games like Overwatch, Heroes of the Storm, and Hearthstone: Heroes of Warcraft (which also does quite well on mobile). It has Call of Duty, one of the most successful game franchises in history. It publishes the megapopular online shooter Destiny, which developer Bungie plans to support for a decade. And it has a strong interactive-toy brand in Skylanders.

With King, on top of everything else, Activision now has an obvious way of generating serious cash from all aspects of the gaming business.