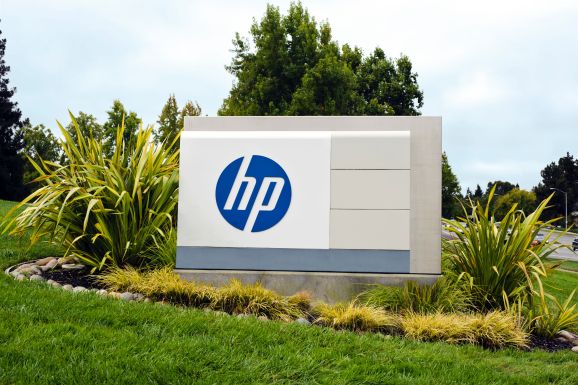 So much has gone so wrong so often for Hewlett-Packard over the past 10 years, it’s amazing that the company which birthed Silicon Valley still exists.

Today, in the latest desperate bid to breathe life into this once-mighty corporation, chief executive Meg Whitman will cleave it in twain. Henceforth, there shall be two companies, where once there was one hilariously tragic bumbling giant.

We present: HP, the company that will inherit the PC and printing business. With both businesses sliding toward the abyss, this is known in investment banking jargon as: The Short End Of The Stick.

“We approach this challenge with the heart and energy of a startup coupled with the brain, muscle and determination of a Fortune 100 corporation,” said Dion Weisler, president and chief executive officer of HP, in a press release.

The other company has selected the electrifying name: Hewlett Packard Enterprise. Oooh! Sizzling! Whitman will run this business, which will retain the server, data storage, networking, and software products. With some of these businesses in only moderate decline, this is known in investment banking jargon as: The Slightly Less Short End Of The Stick.

Appropriately enough, the experiment to see if one wrong can make two rights comes on the cusp of all the annoying Back To The Future nonsense. Back in 1999, HP broke itself into two companies to focus more on PCs and printing.

After that breakup, HP hired one Carly Fiorina as CEO. Her legacy (unless she becomes president!): strong-arming the deal to buy Compaq for $25 billion to double down on the printing-PC bet.

How’s it gone since then? Let’s take a look:

2005: HP board forces out Fiorina over lackluster performance following merger.

2006: HP board enveloped in spying scandal as it tries to determine the source of leaks to press.

2010: HP parts ways with CEO Mark Hurd (Fiorina’s successor) in midst of investigation of sexual harassment (later determined to be unfounded). Hurd gets fed up with the board and splits, joining HP-enemy Oracle.

2011: HP fires Leo Apotheker just a year or so after he succeeds Hurd.

2011: Just before he leaves, Apotheker oversees the $11 billion acquisition of British-based Autonomy, a deal so bad that it later results in Whitman accusing Autonomy execs of fraud, an accusation that leads to a massive outcry but has yet to be substantiated by any investigative body.

2014: More than three years into a five-year turnaround that shows little sign of progress, Whitman goes ¯\_(ツ)_/¯ and announces company will be whacked into two pieces.

As the French like to say, “Bon Courage” to all those hearty souls still gutting it out as HP/Hewlett Packard Enterprise. May the next decade be far more boring and successful.