The Need for Speed franchise, which turned 18 this year, has become older than some of the players who’ll buy it. Unfortunately, this latest reboot might not offer a convincing argument to pick it up again.

Don’t get me wrong: Need for Speed, as it’s simply called once again, offers a definite improvement over recent installments in the franchise. The graphics look distinctly better, the nighttime setting makes things moody, and car customization reappears. But some odd choices, bad A.I., and a few frustrating quirks sap some of the long-term fun from this chapter.

You’ll spend this Need for Speed competing to raise your rating in five areas: speed, drifting/style, how many missions you do for NPCs, building up your car, and breaking the rules/evading the police.

Ghost Games developed Need for Speed for Electronic Arts. It launches tomorrow for PlayStation 4, Xbox One (reviewed here), and PC for $60. Above: Check the reflections on the street: Many scenes in this nighttime world were just this pretty.

The graphics and video

All those screenshots and video you’ve seen of Need for Speed so far? They’re real. While this game doesn’t devote the lavish, overwhelmingly loving attention to car models that Forza does, the combination of car and background frequently stuns — or at least pieces of it do. In a number of scenes, I stopped to watch the reflection of trees moving in water. The trees themselves didn’t look too impressive, but their reflections dazzled.

In motion, things start to break down, and with all the water and splash effects and windshield damage and whatnot, some parts of the background begin to look blurry. You get no cockpit view in this Need for Speed, and it’s always nighttime (more on that in a second), so after a while, the graphics won’t enthrall you as much. But they definitely make up one of the most enticing features of this game. I spent a lot of time at the start just taking screenshots of cool vistas.

I did note some framerate stutter at high speeds, but was unable to reliably predict when it might happen. Sometimes many cars were with me on the road; sometimes I was alone. Sometimes it happened when players joined the game; sometimes it seemed triggered by nothing at all. In all cases, it disturbed the action.

The storyline video is full motion, campy but well-performed by actors with a self-aware smirk, and it integrates graphics (notably, your car) with those videos in an absolutely seamless way. I found myself peering at the screen at first, trying to determine whether the video was in fact computer-generated, because of the natural presence of my personalized ride. Well played, Ghost Games.

Your car’s damage models in real time, adding to the appearance but not affecting much in terms of its handling or speed. You can fix it up at any time by visiting the garage, which is a menu button away. The damage itself looks semi-realistic: steel crumples like steel, carbon fiber crumples … like steel. Above: Officer, it was dark, and I just couldn’t see where I was going. I swear.

The marginally fictionalized “Ventura Bay” area of Los Angeles serves as home for Need for Speed, and its layout feels surprisingly real. Hopefully you enjoy seeing it in the dark, because this game takes place between dusk and dawn. It feels like an odd choice at first, but I have to admit blazing down the I-5 highway at 200 mph wouldn’t be tremendously realistic during daylight hours.

It also rains a lot more in this fictionalized L.A. than in the real thing, apparently, because the streets are always wet. The video scenes suggest that all the action takes place in a single night, which makes the weather slightly more believable, but not the time spent, since the missions would take you far more than a single stint in the dark.

The darkness creates many opportunities for beautiful reflections, however, and after a while, it gives the city a mysterious urban vibe the real, sunny L.A. can’t match. The setting goes much further than the campy video in making you feel like you’re part of the West Coast racing underground. 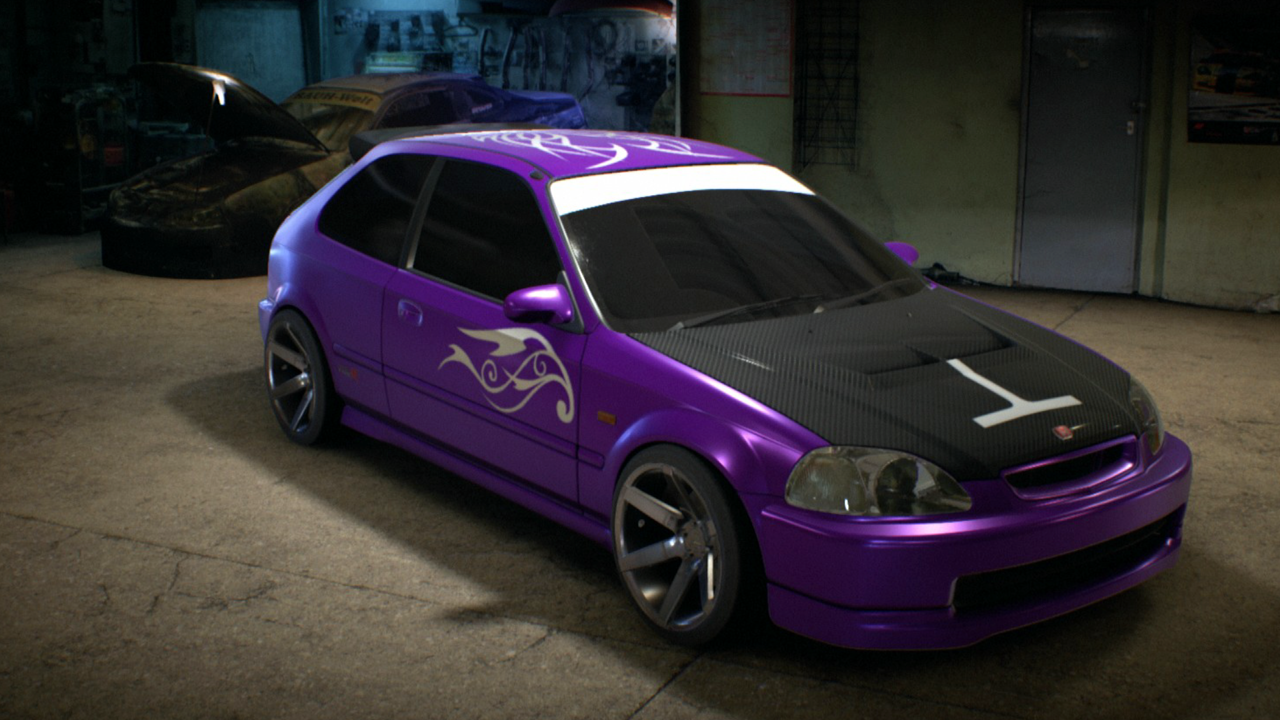 Above: My first car, a customized Civic Type R, sits in the garage. Hey, I like purple, people.

Car customization menus in Need for Speed don’t offer as many deep options as true tuning games, but those options that are available to you — typically four to five selections to start in about a dozen categories — make a big difference in how your cars drive. How much or how little you fiddle with is up to you; the game offers general sliders if you want it to make the choices for you, or specific part adjustment and replacement if you’d prefer to direct the action.