The industry is making plenty of money these days.

Games market research group Newzoo today released its list of the top 25 public game companies with the highest revenue, based on the first half of 2015. Combined, they earned $28.7 billion in revenue, up 16 percent from the same period last year. A growing industry is a healthy industry, and Newzoo expects gaming to be worth $91.5 billion this year, thanks to the growth of new consoles, PC online gaming, and the mobile sector.

Mobile doesn’t begin to enter the equation until Apple at the No. 6 spot, but that company makes most of its money through distribution. A mobile developer, King, enters the scene at No. 10. However, King is the only company in the top 10 to make less money this year, suffering a 12 percent drop. 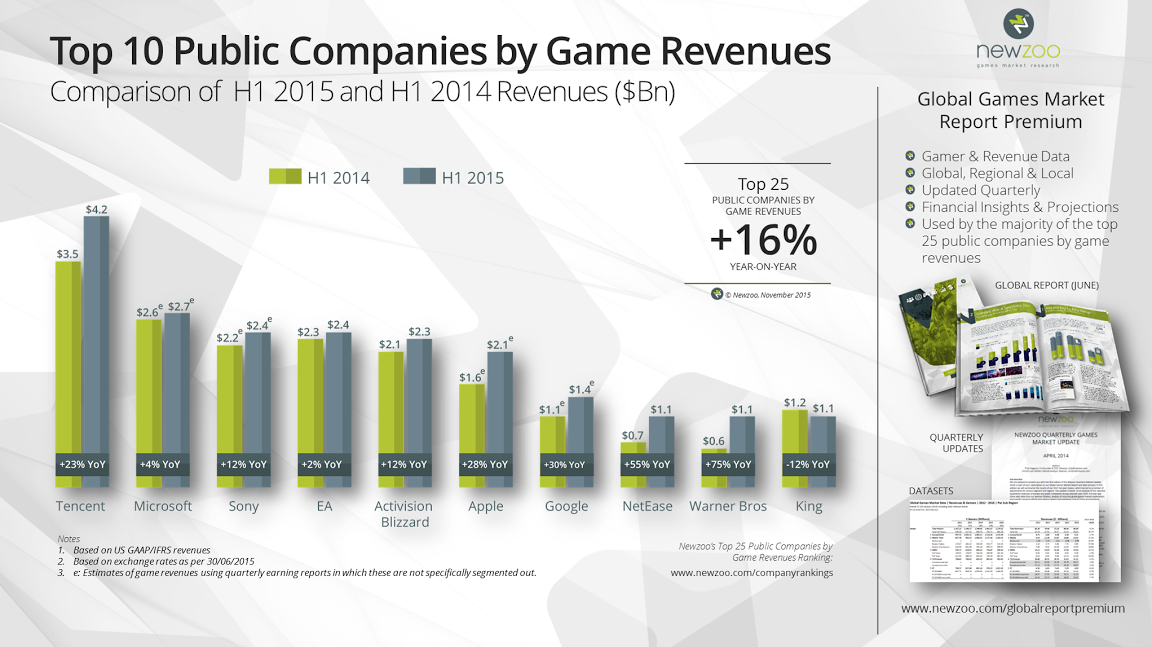 Above: Lots of growth.

Tencent owns a majority equity interest in Riot Games, the developer of League of Legends, one of the most popular games of the modern era. The free-to-play MOBA (multiplayer online battle arena) earns over $100 million every month.

While Sony’s PlayStation 4 outsells Microsoft’s Xbox One, Microsoft still earns gaming money from PC titles and Minecraft, the popular multiplatform title that it purchased last year for $2.5 billion. Nintendo is at the same spot on the list as last year, No. 12, although it did see 10 percent growth from the same period in 2014. It’ll be interesting to see how the company’s fortunes change this time next year after its mobile games hit the market (and maybe that new console will be out).

Warner Bros., which recently started to post its game earnings separately from the rest of the company, is new to the list  this year, debuting at No. 9 with $1.113 billion thanks to hits like Batman: Arkham Knight and Mortal Kombat X.

Mobile developer Mixi is the other new company to crack the list this year, thanks to hit Monster Strike. Mixi earned $754 million in the first half of the year, according to Newzoo.

Two companies also left the rankings. Ubisoft didn’t have a hit this year comparable to 2014’s Watch Dogs. Japanese social game developer Gree also dropped from the list as it saw a 27 percent drop in revenue from the same period last year, $351 million compared to $482 million.