If you want to watch videos on the latest version of the Apple TV, you have a few options available, including Netflix and YouTube.

But one option that isn’t available is game streaming app Twitch, which had 100 monthly active users as of June. Amazon, which acquired Twitch last for $970 million last year, has banned the new Apple TV from its online selection. Amazon sells the Fire TV, which competes with the Apple TV. It’s not surprising to see that Apple won’t support a service from a competitor.

Game streams from startup Hitbox are not available on the new Apple TV, either.

Fortunately, there’s a workaround. It’s not as simple as opening an app on the Apple TV, but it’s not extremely hard, either. It will require a bit of tinkering with open-source software, but for game streaming fans, it might well be worth it.

Download Xcode version 7.1 from the Apple website. If you have an older version of Apple’s integrated development environment, you’ll need to update.

Download CocoaPods version 0.39 from GitHub. (I use the GitHub Desktop app; all I have to do is go to the repo online and hit the “Clone in Desktop” button. Alternatively you can download the ZIP file or manually clone the Git file using the repo’s URL.) Also, download the Xcodecolors plugin from GitHub. 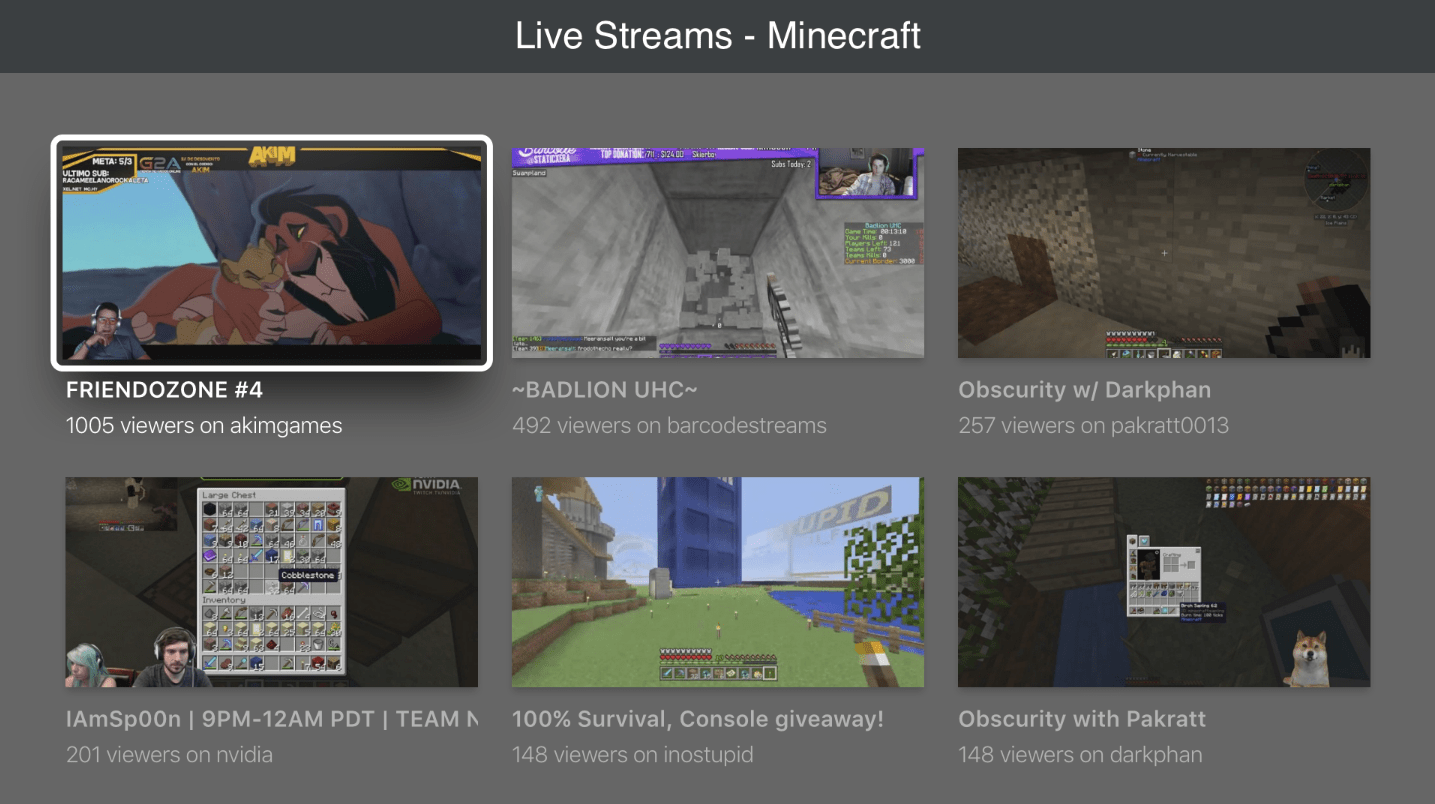 Above: Minecraft streams available on Twitch for Apple TV, as shown in Xcode’s Apple TV simulator.

Then, go ahead and download the source code for StreamCenter, an open-source project created by developer Olivier Boucher.

Open the Terminal application on your Mac. (Some Terminal basics are here and here.) Install the CocoaPods library by typing in the following stream: sudo gem install cocoapods. Then, navigate to the StreamCenter folder (for me, it’s sitting inside my Documents folder). Type in pod install.

Go to Finder and open up the StreamCenter folder. Open the file named “GamingStreamsTVApp.xcworkspace” in Xcode. Click on the gray box at the top of Xcode that says “GamingStreamsTVApp.xcworkspace” and select the Apple TV simulator from the dropdown menu. Hit the play button just to the left. Loading the simulator may take a minute. Once it loads, you should see Twitch and Hitbox streaming options. (As is the case with the sample code for tvOS, the operating system inside the new Apple TV, you can navigate around with the simulator for the device’s remote. To access it, go to the Hardware dropdown menu and click “Show Apple TV Remote.” Hold down the Option key and use your trackpad or mouse in the black square on the Apple TV Remote in order to simulate using your finger to swipe on the real remote.)

Now you’ll need to connect your Mac to your Apple TV. You can use Apple’s AirPlay system to do this; just turn on AirPlay in the Displays section of System Preferences, and you should be able to mirror your Mac screen on your Apple TV.

With that, you should be good to go. 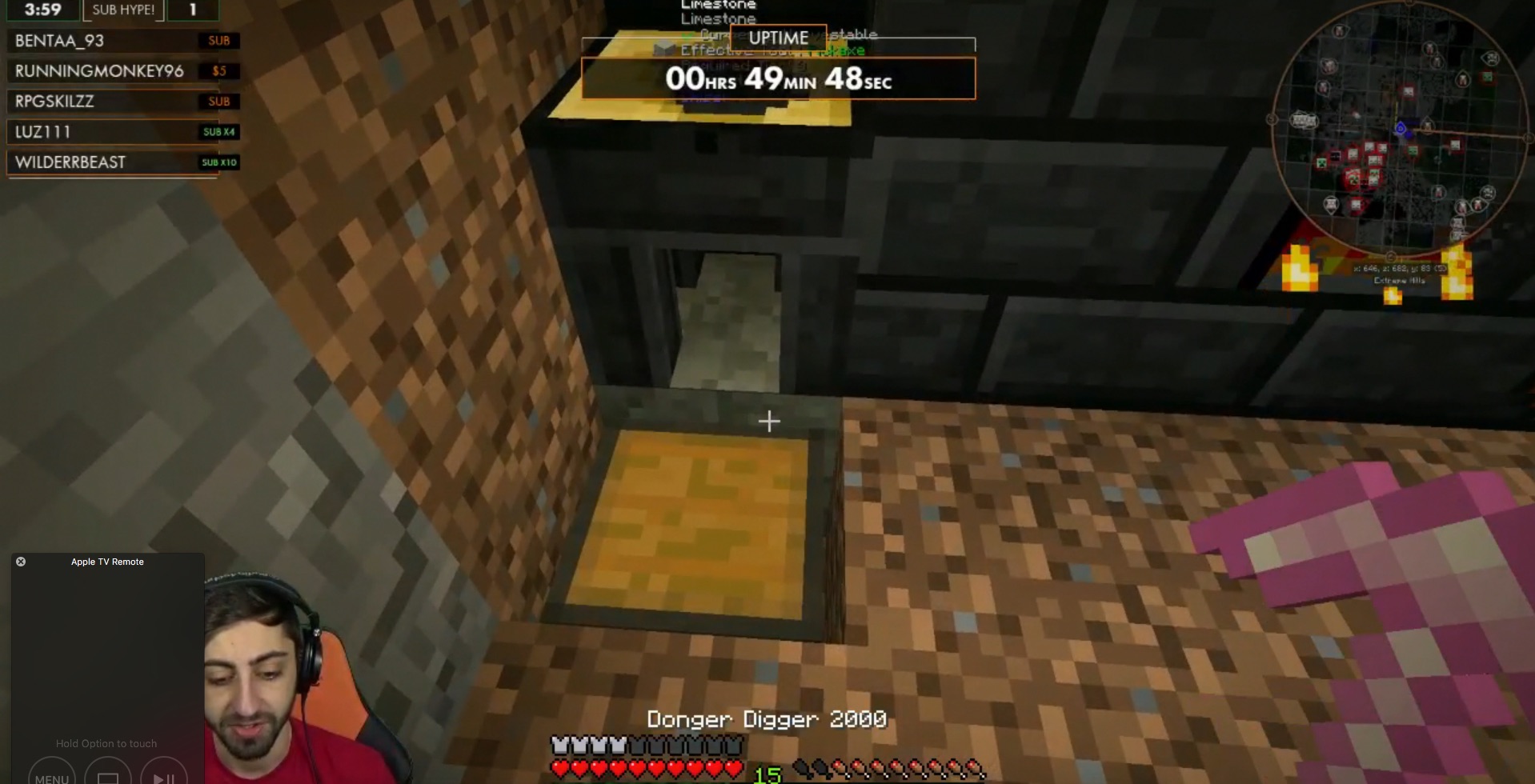 Above: A Twitch stream of a Minecraft game being shown in the Xcode Simulator and then mirrored to the Apple TV.

The next release of StreamCenter will come with support for authentication and access to personal content, as well as content you’ve subscribed to on Twitch and Hitbox, according to the README page for the project. So be sure to keep an eye on the project going forward.

Ken Yeung contributed to this article.