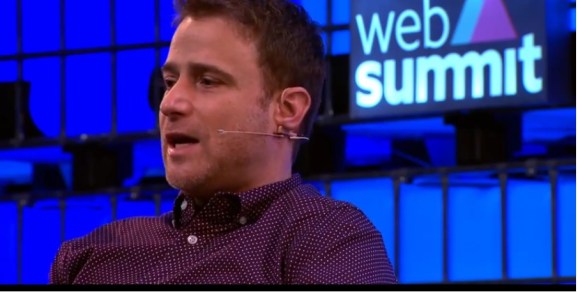 Not only does success not necessarily banish stress from the life an entrepreneur, it can actually increase it.

That’s according to Slack cofounder Stewart Butterfield, who was being interviewed today on stage at the Web Summit 2015 in Dublin. Slack, a workplace communication tool, has become a monster success story over the past two years, with an estimated valuation of $2.8 billion.

He added: “I think I wake up every day and look in the mirror and say, ‘We’ve almost certainly fucked this up completely.'”

Slack was famously born out of the rubble of a gaming company Butterfield had started previously. The failure of that earlier effort left Butterfield feeling a different kind of stress, as he had to explain the company’s collapse to disappointed employees and investors.

Before Slack, Butterfield was previously best known as a cofounder of photo sharing site Flickr, which was acquired by Yahoo for $25 million almost a decade ago.

Of course, with Slack reportedly worth $2.8 billion after raising $160 million in venture capital earlier this year, $25 million seems like pocket change.

Butterfield noted that while that sum now seems tiny, at the time, when there was virtually no investment flowing into the consumer Internet space, it felt like a huge return.

“The thinking that sounds preposterous is that $25 million isn’t a lot of money,” he said. “The technology industry has gotten so crazily out of control.”