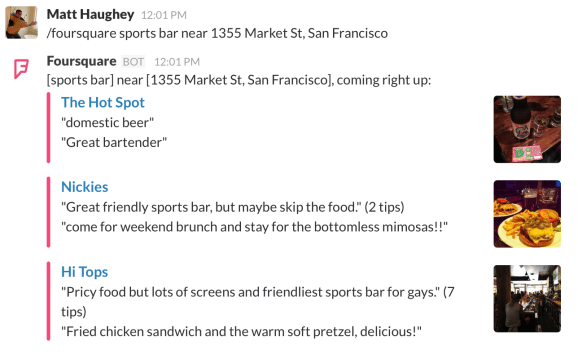 Team communication software startup Slack today announced updates to its application programming interface that will make it easier for users to do more with Slack’s slash commands, which are shortcuts that can be triggered via the slash (/) character right in the text input box.

For example, new slash commands let you order a ride home from Lyft or check out lunch options nearby with Foursquare by typing in “/lyft gohome” and “/foursquare lunch near [address],” respectively. And now slash commands “can post both privately and publicly into channels along with improved formatting,” Slack wrote in a blog post on the news.

The updated tool also allows for as many as five responses to a single slash command, up to a half-hour after the first slash command. Developers can customize the icon, name, and formatting of the responses that users receive upon entering a supported slash command. Responses can now include text and image attachments, too.

Slack has a few example integrations to show off the updated API: Lyft, Foursquare, Dribbble, Poncho, and Blockspring.

This builds on Slack’s earlier efforts to build out a full platform for simple integrations. Most recently, in August, Slack launched the “Add to Slack” button. Slack’s API dates back to 2013.

Check out Slack’s updated API documentation to learn more about the updates.