It’s been six years since the last Left 4 Dead game, and in the series’ absence we haven’t had many games attempt to take the mantle of slaughtering hordes of enemies with friends in a first-person shooter.

Enter Warhammer: End Times — Vermintide (available now for PC), which mimics the Left 4 Dead structure and throws the fantasy fiction of the Warhammer universe behind it. The plot is that all the bad guys in the Warhammer universe have gotten tired of the good guys being alive, and they’re making one collective push against them, beginning with a legion of rat-like Skaven.

As it turns out, Skaven make for good zombie stand-ins, and developer Fatshark has managed to do right by their inspiration in a number of ways. But a number of key issues hold it back from being the multiplayer riot it could have been.

It gets the Left 4 Dead vibe right

During my first few games of Vermintide, I wondered if I shouldn’t just go back to Left 4 Dead. You choose from a number of different missions (unlocking more as you clear others), choose a difficulty, and head in with a group of friends, random players, or computer-controlled teammates — similar to Left 4 Dead. Then you fight hordes of rats the same way to fight zombies in Valve’s team shooter, with a combination of melee weapons and guns. Some “special” rats that will capture a single player and drain their health until a teammate manages to fight them off. It even has “Rat Ogres” to match Left 4 Dead’s Tank zombies, and they look as ridiculous as the concept implies. Several direct parallels gave me the feeling of a me-too clone.

Fatshark gets the feel right, though, and as I continued playing, I picked up on its nuances. Pressing the attack button while blocking will push enemies off you, which is fun at lower difficulties but essential on harder settings. You can also backdash by holding block and jumping, which evades attacks that would otherwise drain your stamina meter (the stat that helps you block enemy attacks). Rather than mashing the trigger (or clicking the right mouse button) constantly, I was blocking, dodging, and waiting for my moment to strike, which made the combat feel substantial and rewarding.

Vermintide also manages to produce similar highs that I felt with Left 4 Dead, like meeting a group of complete strangers, communicating with them about objectives and threats, getting through an encounter that seemed overwhelming at first, and then triumphing with a sliver of health and making it to the exit. When it works, it’s a great balance of challenge and engagement, and I can see myself doing more runs of the same missions with friends even after playing it for over 20 hours. 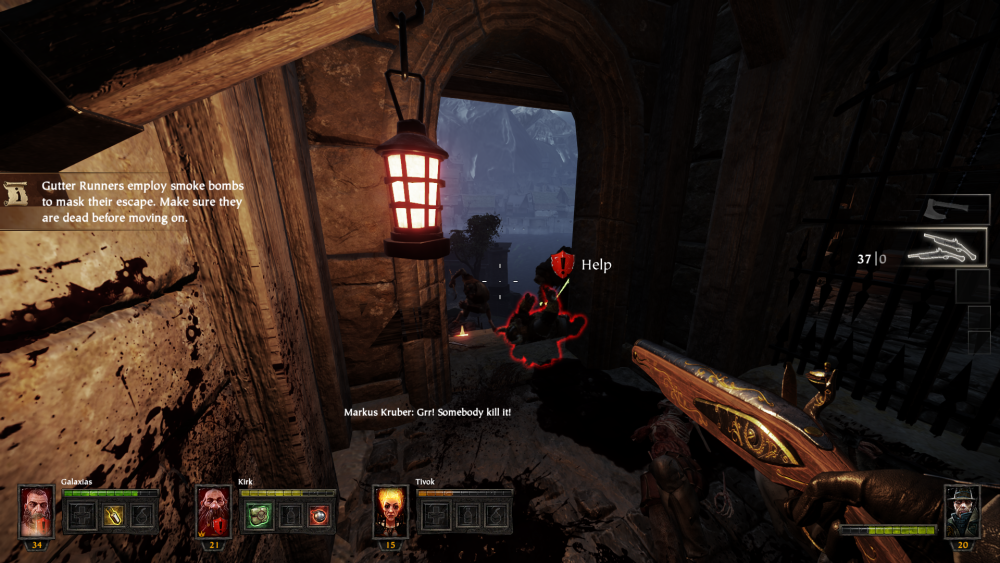 Above: As in Left 4 Dead, teammates will have to stick together to avoid getting picked off.

It also evolves that vibe

Vermintide also deals with one of Left 4 Dead’s major issues: lasting value. Sure, those games were popular enough that you’ll still find people playing them today, but it was hard to get excited about playing the same eight or so missions over and over. Vermintide alleviates this by introducing some Diablo-esque features into the formula; after every run, you’ll roll a set number of dice to see what kind of loot you get.

You can increase your chances of getting better items by finding tomes throughout the level, which take up item slots that could instead hold healing items. In one match, a group I was in had to think long and hard about whether we wanted to take a second Grimoire (a tome that reduces the team’s maximum health) with us, since we were already low on health and healing supplies, and we decided not to. These tomes are a great way to implement loot into a reflex-based game like this, since they add some crucial risk-reward without feeling like they’re only tweaking the numbers against you.

Vermintide also adds some longevity to the Left 4 Dead model by distinguishing each of its five characters. Playing the Bright Wizard felt like I was playing another game, since she doesn’t need to look for ammo but instead relies on keeping her magic flames from consuming her. More important, the differences in classes ties directly into the loot system, which means every new weapon you get is a reason to revisit another class. Every class has their role, too, with the Dwarf and Soldier leading and corralling hordes of rats while everyone else focuses on finding special Skaven or dealing damage. This makes it easier for teamwork to emerge naturally and without anyone having to speak, which now seems like something I’ll miss if I got back to Left 4 Dead.

There’s also enough dialogue between these characters that you get to know and distinguish them based on their personality. The Dwarf and the Elf hate each other, the Wizard seems to resent everyone else, the Witch Hunter has this nasally, pompous voice that makes me dislike him. It’s what Left 4 Dead did, too, making the character interactions the center of its narrative rather than the actual plot, and knowing that the differences between these characters go beyond aesthetics and into how they actually play infuses these interactions with even more personality. 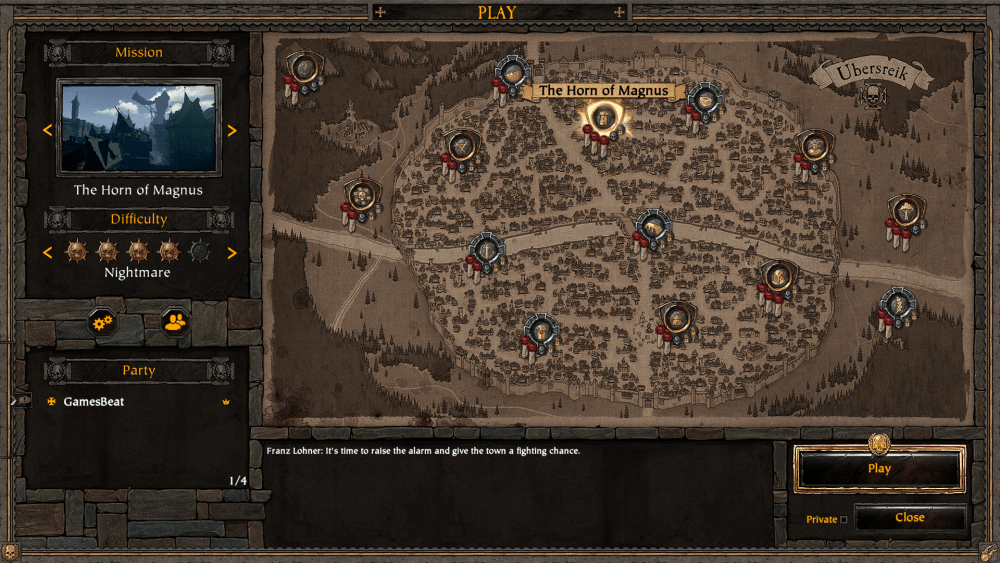 Above: Vermintide has a number of different missions to tackle, and collectively they tell a story.

I see a future for myself with Vermintide, but I don’t think I want to pursue it.

I’m still having fun getting through all the missions with both friends and random players, but in order to continue climbing the loot mountain, I’m going to have to start playing on higher difficulties. Hard feels like a good middle spot right now, as I’m still getting weapons of the highest rarity (Exotic). But if I want better chances of those weapons dropping, of gaining levels more quickly in order to receive more weapons to craft into better ones, I’m going to have to start playing on Nightmare or higher. And having played a mission on Nightmare a few times, it’s not going to be fun.

So while I still want to keep playing Vermintide, I don’t feel like I have the best outlet to continue to do so unless I want to put myself through the ringer, even with all the allure of finding new weapons making them more powerful. It also feels like you’ll need much better weapons to tackle the higher difficulties, which is going to make finding games on those difficulties much harder. You never find armor to reduce the amount of damage you take, so no matter how good your weapons are, you’ll still die in three or four hits. And if you don’t want to go through that, the whole loot cycle comes undone. That’s disappointing.

Even on lower difficulties, you’re better off playing with people than computer-controlled allies, and that has its ups and downs. While this has a lot of potential to have a good time with strangers, more than a few people out there won’t let you hear the end of your failures. Even in groups of fours, I found there’s a tendency for cliques to form and for single players to get labeled as “the problem.” No matter how the team ends up failing, that person gets blamed for it. And if you’re that person, you may as well find another group. The higher the difficulty, the worse this gets, and it’s never pretty. 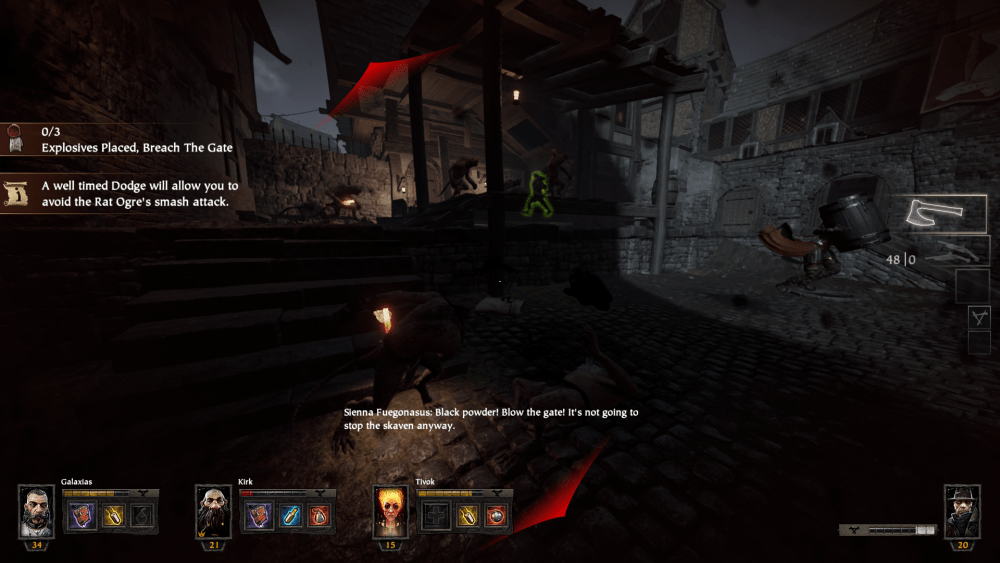 Above: Tomes and Grimoires allow you to try your luck and make the game harder in exchange for a shot at better loot.

All the technical issues

Another problem hampering my desire to keep killing Skaven is the deluge of technical issues that can do everything from give me free stuff to killing great runs entirely. At one point, I entered a lobby as the game was ending and got all the experience and drops I would have gotten if I’d played through the entire thing. That’s great for me, but the system offsets this with near-complete runs that end with everyone getting disconnected, players randomly falling through the world and dying, or the game reading revived players as dead, which means they couldn’t revive anyone else or even heal themselves.

Vermintide also suffers from random crashes and disconnects, and sometimes, the character of the person who disconnects will walk off into the sky instead of being replaced by the A.I., dying and taking their precious tome with them. These glitches aren’t constant, but they happen often enough that losing all the progress I’ve made on a difficult run is always at the back of my mind, which keeps me from fully investing in the rest of the game.

A minor thing to note: Around 95 percent of the games I’ve entered were hosted in Europe, which could account for these glitches as well as lag. But if you’re a player from the United States, you’ll have to contend with dealing with time schedules from outside the country.

Warhammer: End Times — Vermintide gets so many things right, and its designers have made enough smart decisions about how to deviate from the Left 4 Dead, that it makes the difficulty knee-capping and technical mishaps all the more disappointing. It’s absolutely worth a look if you’re looking for something to do with friends and love slay hordes of monsters. Just don’t be surprised if you find yourself quitting earlier than you might want to.

Warhammer: End Times — Vermintide is available now for PC, with Xbox One and Playstation 4 versions due out early next year. The publisher provided GamesBeat with a digital copy of the PC collector’s edition of the game for this review.