Console games are once again on top of TV ad spending, holding four of the Top 5 spender spots in the gaming industry. In October, 35 gaming brands ran 97 commercials nearly 22,000 times on TV, accounting for over $72 million in airtime. While mobile developers haven’t been completely knocked off the charts, new console game releases have been flooding television. 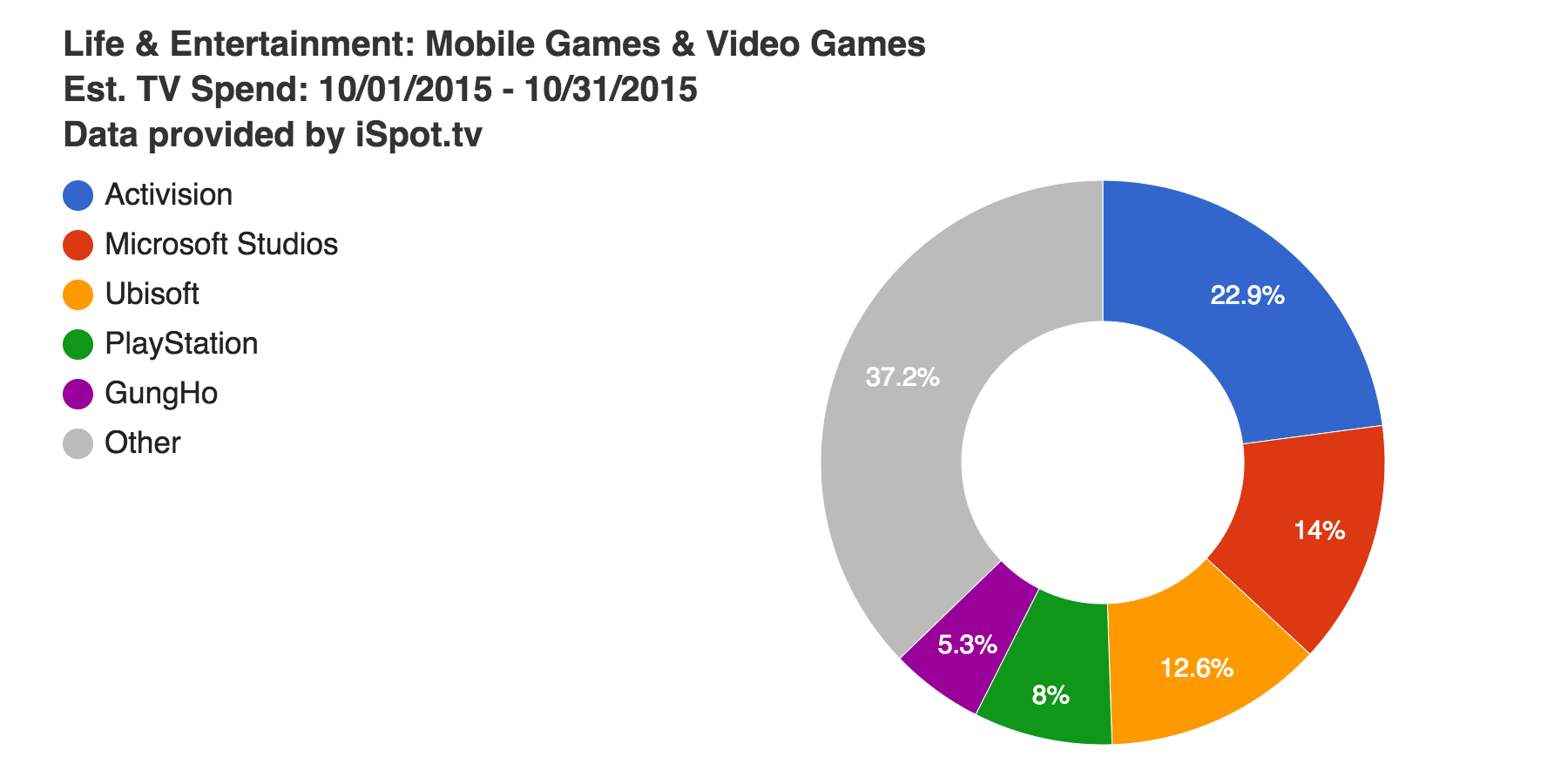 The biggest spender in the gaming industry in October was Activision, accounting for nearly 23 percent of the industry’s total spend. (Activision is likely to grow its share even more, given that it just spent $5.9 billion to acquire King Digital, of Candy Crush and Farm Hero fame.) Pushing new releases from both the Guitar Hero and Call of Duty franchises, Activision spent nearly $15 million running just two spots. These ads also accounted for over 22 percent of the digital response the entire industry generated this month.

GamesBeat has partnered with iSpot.tv, which measures TV advertising in real time, to bring you a monthly report on how gaming brands are spending and which are generating the most digital response.

Microsoft Studios ended the month as the second highest spender in the industry, utilizing almost its entire budget to promote the new Halo game, Halo 5: Guardians. While they’ve ran three ads promoting the game in the last month, the biggest push by far went to “Halo 5: Guardians: Launch.” In less than a month the ad aired 472 times. (Microsoft is pulling out all the stops; as GamesBeat reported in October, Microsoft has even partnered with DJ Skee’s Dash Radio for an all-Halo music station.)

Ubisoft may be in third place for top spenders in the industry overall, but its ad for Assassin’s Creed: Syndicate, “Save London,” received the highest spend for any single ad over the past month. The ad, which debuted on October 12, has run 491 times already. Though ads for the newest edition to the Assassin’s Creed franchise were a clear focus, the brand also ran five ads for the new Just Dance game as well.

PlayStation focused the bulk of its spend this month promoting Uncharted: The Nathan Drake Collection. The ad, “Future,” ran mostly at the beginning of the month around the release of the new game on October 7, but it still managed to account for over 5 percent of the industry’s full-month spend. PlayStation also spent heavily on a campaign promoting PlayStation Vue, an in-console TV experience.

GungHo closes out the top spenders chart, keeping the mobile dream alive. Promoting Puzzle & Dragons, “Subway Fight,” which first debuted at the end of September, aired 2,327 times in October and accounted for 5.35 percent of the industry’s total spend for the month.