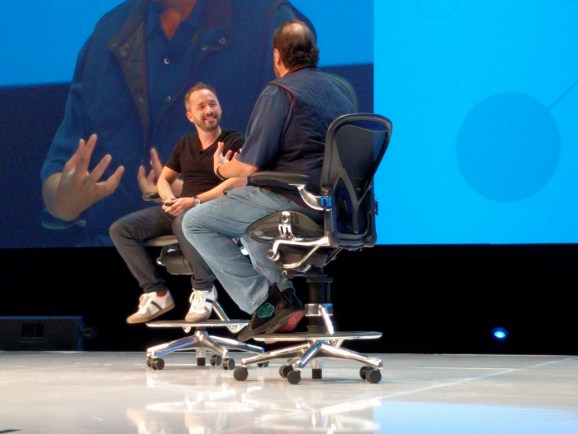 “We have added 50,000 paying business customers in the past 10 months,” Houston said at the inaugural Dropbox Open customer conference in San Francisco.

Houston took this as an opportunity to compare itself to an unnamed “competitor” — most likely that would be publicly traded Box. “We’ve added more paying business customers than they have in their lifetime, think about that,” Houston said.

Founded in 2007, the company has evolved from being an app primarily used for personal purposes to one that businesses can deploy for employees. Dropbox is arguably the hallmark of the consumerization of enterprise software. Now the question is how big of a business Dropbox can build.

Dropbox’s unnamed “competitor” is facing a “challenge,” Houston said, because it doesn’t “have that kind of bottoms-up adoption. It’s a lot harder for them to get customers.”

Based in San Francisco, Dropbox last announced funding in February 2014 at a reported $10 billion valuation. The company has been under pressure to show it’s worth at least that much money. Rather than focusing on developers (as it did in 2013 with the high-profile DBX conference), today Dropbox is all about customers — current and future alike.