Facebook has released its Q3 2015 earnings, saying that it generated $4.50 billion in revenue and non-GAAP earnings per share of $0.57. “We had a good quarter and got a lot done,” said chief executive Mark Zuckerberg.

“We’re focused on innovating and investing for the long term to serve our community and connect the entire world,” he explained. 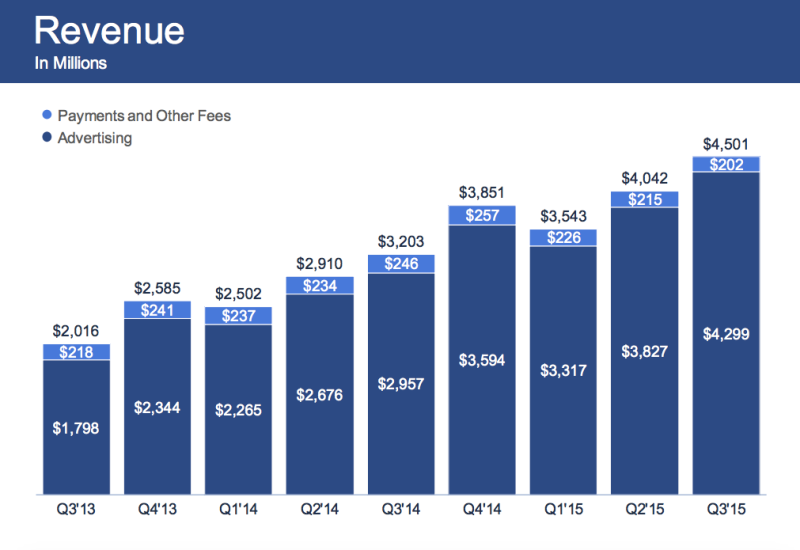 Wall Street analysts had expected $4.37 billion in revenue for the quarter with earnings per share of $0.52. The stock closed up 1.33 percent at $103.94 for the day, but in after-hours trading, the company’s stock kept going, trading up over 2.27 percent. This was likely based on learning that more people are using the social network on a monthly and daily basis.

Facebook said it has over 1.55 billion monthly active users and 1.01 billion daily active users. Interestingly enough, 47 percent of its users don’t touch the desktop version — they’re purely accessing the service via their mobile device. In looking at the past few quarters, the gain Facebook made in MAUs hasn’t been this high since Q1 2014.

Mobile advertising continues to represent much of what Facebook gets, generating 78 percent of advertising revenue (which was $4.299 billion this quarter). This is a 12 percent increase from a year ago. Money the company received from payments and other areas dropped 18 percent year over year from $246 million to $202 million.

“We made a lot of investments in our ads business and those investments are really paying off,” chief operating officer Sheryl Sandberg told CNBC earlier today. “Our ad revenue is up 45 percent from last year … and that’s because we think we have the best mobile ad product on the market.” 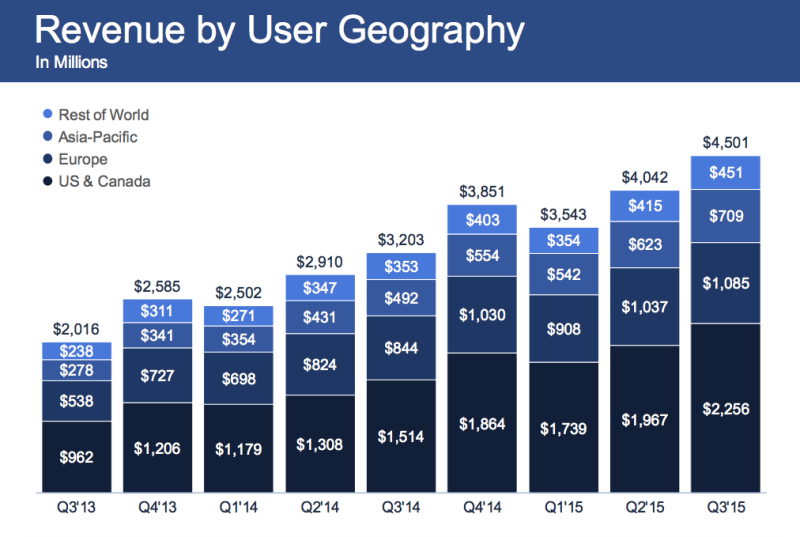 Most of the money continues to come from the United States and Canada, where revenue increased 39.3 percent annually. The Asia-Pacific market saw the second largest increase in year-over-year revenue, bringing in 36 percent, while the European market also contributed a good portion, seeing an increase of nearly 25 percent. The rest of the world saw revenue go up 24 percent.

What’s missing from Facebook’s earnings are how much revenue is generated from the different products, specifically Instagram and WhatsApp.

This quarter, Facebook seemed to chug along as usual: adding new ways to connect billions, specifically with its Internet.org initiative (which Zuckerberg credited with giving 15 million people access to the Internet); opening up new advertising tools for the emerging market, those with TV commercial budgets, and those marketing on Instagram; bringing Instant Articles to more users; and continuing to promote its support of developers.

The company has also revamped its Pages offering in a way that caters to small and medium-size businesses by making it easy for them to set up a mobile-first online presence. “Facebook has been on a roll with its advertising revenue, and its next big opportunity is with small businesses,” said Larry Kim, founder of online advertising software provider WordStream. “Just a few years back, Facebook Ads offered questionable ROI [return on investment], but today, thanks to their compelling mobile ad formats and powerful ad targeting options like custom audiences which drive awareness and sales, Facebook has today become an essential component of small business marketing.”

Earlier this year, Facebook’s stock had been teetering near the $100-per-share mark and seemed likely to break that barrier soon, but following the social networking company’s unimpressive Q2 2015 earnings report, that didn’t happen. The stock price dropped to stay around $90 — until late last month when it finally broke through, valuing the company at over $280 billion.