SAN DIEGO, California — Wendell Brooks says he has some big shoes to fill. Come January, Brooks will become the new president of Intel Capital, which is investing more than $500 million in tech startups this year and has become the largest tech VC in the world.

He’ll replace Arvind Sodhani, a legendary executive at Intel who first proposed the tech investment strategy in the 1980s and ran Intel Capital as a standalone group since 2005. Sodhani’s group, which has more than 200 staff and 65 investment professionals, has had stellar results.

Intel’s strategic investment and acquisition group has invested $11.6 billion since 1991 in 1,400 companies in 57 countries. During that time, 213 Intel Capital portfolio companies have gone public and 377 were acquired. Sodhani, who retires in January after 35 years at Intel, made his swan song appearance yesterday at the Intel Capital Global Summit, an event that drew more than 1,200 people.

Brooks took the stage to talk about how he’ll carry on Sodhani’s legacy. This year, Intel scored big as one of its portfolio companies, Virtustream, was sold for $1.2 billion. It also started a $125 million Diversity Fund, and Intel this week said it invested $22 million in an additional 11 companies, bringing the total number of investments to 56 this year. Brooks, a former investment banker and ex-engineer, talked with me at the summit. 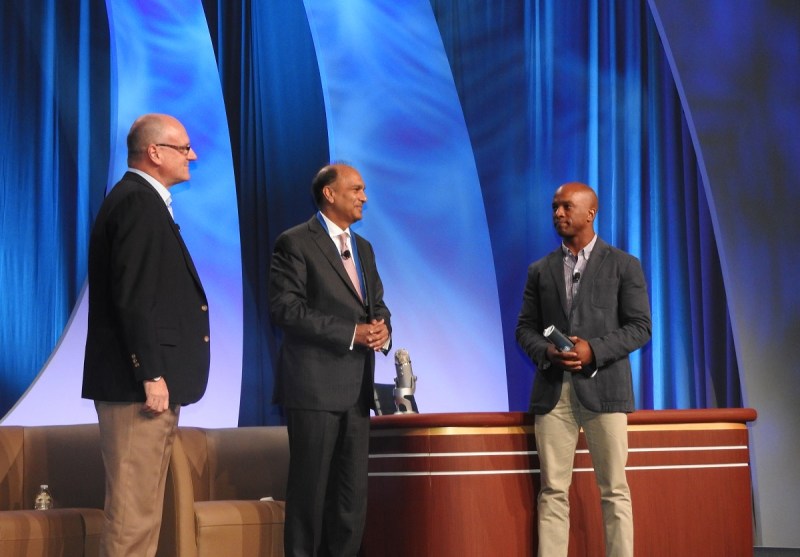 Above: Wendell Brooks (left), Arvind Sodhani, both of Intel Capital, and Jon Fortt of CNBC.

VentureBeat: You have a fresher perspective on Intel Capital, investing, and what Intel should be doing strategically. What do you think you bring from the outside?

Wendell Brooks: What sold me on the opportunity was to come and stimulate growth within Intel. We have some incredible internal businesses that are growing, like our cloud business and our data center business. At the same time, there are holes in the portfolio and the technology space that we need to fill through mergers and acquisitions. 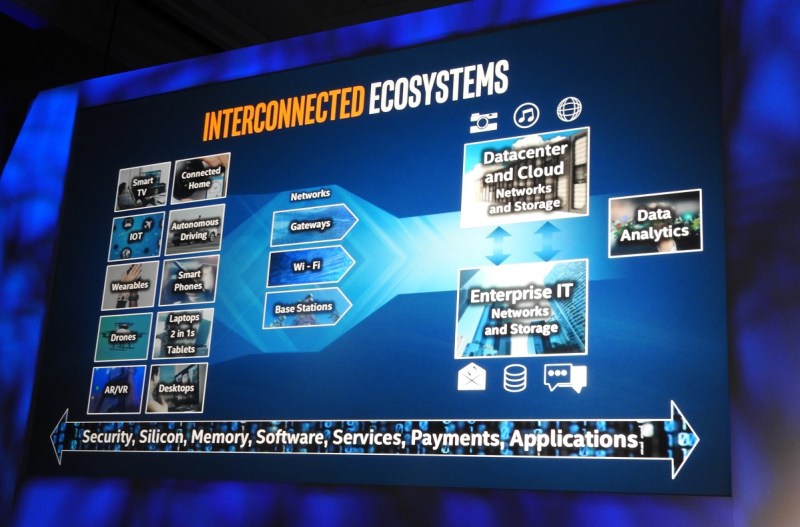 What attracted me to Intel was spending time with Brian [Krzanich] and Stacy [Smith] in the sale of Intel Media to Verizon. As an outside advisor, I really liked their style. They convinced me that inorganic growth was going to be key to the future of Intel. I came into the M&A role in September 2014 to stimulate that growth.

At the same time I saw this wonderful second opportunity for growth in the form of Intel Capital making investments in places the business units aren’t focused on, participating with disrupters in new technologies and new business models, and creating a self-fulfilling cycle of information-gathering, smart investing, bringing our technology to bear, and creating value for Intel.

Between M&A and Intel Capital on the equity investing side, my role is looking out from the base business to find new areas that will stimulate the growth profile of the whole company.

VB: With Virtustream, Intel has its unicorn. It was interesting to see the slides from some of your presenters and how many unicorns there are now. It almost seems like that’s changed the expectation as far as investments and growth. I wonder how you take that phenomenon into account as far as what Intel Capital should do.

Brooks: Starting with the unicorn concept — I spent most of my career in the public markets doing mergers and acquisitions, doing capital-raising through IPOs and public debt offerings. There’s a dislocation in the market today. I don’t believe the public markets value companies at the same level as the private markets. Indicative of that, there’s 150-odd unicorns out there in the venture world, and it’s been the driest year of the decade for tech IPOs.

As an investor in new startups, I’m very excited that the private market will value companies at these levels. We need the public market to catch up if we’re going to continue the pace of exits. When you’re fortunate enough to have a Virtustream exit at a billion two on a relatively modest startup investment, it makes everyone happy. It shows that the model works. Capital does flow very efficiently to the places it needs to flow.

Brooks: Our advantage, relative to other VCs, is we have an unbelievable base technology business. We can have a perspective on the technologies and business models before we make the investments. We can also, because of our strong global sales force and our different technology-focused business units, help bring to bear different skill sets than other VCs can as far as helping companies execute toward the value creation road map.

We have to be very careful of valuations and understand the markets that these technologies are meant to disrupt. We have to understand the prospects and the risks of those investments. At current valuations, driven by so much new capital chasing these opportunities, we have to be prudent in our decision-making.

Thankfully I’m the beneficiary of a business unit that’s been around for 16 years, and a team — most of the managing directors have been around for more than 10 years. They’ve been driving these investments very successfully and driving an outstanding return profile over time. 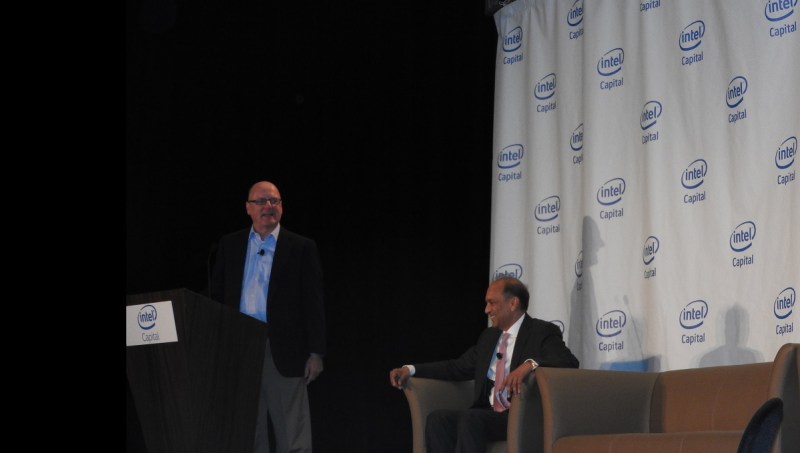 Above: Wendell Brooks (left) and Arvind Sodhani of Intel Capital.

VB: Have you also figured out, in this time, how you do things differently from Arvind?

Brooks: I’m sure there will be differences. Fortunately I’m not taking over an organization that is at all broken. We’ve had a record year in 2015. We’ve deployed almost $500 million already this year. We talked about our record exits.

I’ve spent half of my career outside the U.S. I have an affinity for a more global perspective on investing. We’ve pulled back from some markets over time that I would like to see us invest more in. I also come from a customer service orientation. I’ll be very much focused not just on the investment going in and how it performs, but on how Intel can be adding value to those portfolio companies through route to market or refining their technology or bringing to bear the experience we have with other investments.

This week is my first Global Summit, and it’s proved to me that the networking opportunity — putting our portfolio companies together with each other to share their experiences and learn from each other is something I haven’t seen accomplished this way in any conference I’ve ever been a part of.

VB: As the biggest tech VC, are there certain responsibilities you see Intel Capital having? You have an economic impact as such a large investor.

Brooks: We need to show leadership in the venture community in many ways. Our diversity fund announcement this year is one example of an area where we have tried to show leadership. We’ve dedicated $125 million over five years to invest in women-led and underrepresented-minority-led transactions. We’re on pace this year to use the first $25 million. We have five investments that we’ve announced and a sixth coming soon. I feel very good that that is helping capital flow to areas where we have social responsibility.

Secondarily, we see within Intel a responsibility — we have a wonderful business unit chasing the Internet of Things. We have a strong data center group, a strong client computing group. But there are opportunities in the spaces between those business units where entrepreneurs are disrupting. If we didn’t have Intel Capital, we wouldn’t be able to see those disruptions and build our business model for the next 10 years to focus on where the opportunities might be. We have a responsibility to use our capital to search out and build new technologies that disrupt even our own business model.

VB: I remember Arvind, in 2009, saying that Intel still had a responsibility to keep investing even when times were tough for everyone, after the financial meltdown. This year there have been some hiccups. China has slowed down quite a bit. How does that guide you as far as what you should be doing?

Brooks: The beauty of Intel Capital, from Arvind’s perspective and my perspective, is that unlike the standalone VC firms out there, we have one limited partner. We have to keep that one limited partner happy. Over a 10-year time horizon we’ve kept that limited partner in Intel very happy with our returns, with our strategic uncovering of opportunities, with new business platforms and models that have stimulated growth throughout the rest of the company.

I’ll pick augmented and virtual reality as an example. Over the past three years we’ve placed five or six bets through Intel Capital, two bets through our M&A side, and have developed an unbelievable platform around optics for both AR and VR. It’s a space Intel wouldn’t have found if it wasn’t for Intel Capital.

Back to our business model, yes, when valuations are high or low we tend to get a very consistent allocation each year. We get some version of dollar cost averaging. When prices are high we don’t get as many companies. When prices are low we tend to get better bargains, but we’re consistent. More important, we do a great job of finding technologies that we know something about and that we can add value to.

Even when valuations are high, as I currently perceive them to be, we’re finding things that will create substantial value over the next five years when we make those investments. But it’s the consistency of being able to invest at both ends of the cycle that really pays off for us.

VB: I’m moderating the VR and AR session today. I’d be interested in hearing your thoughts on that.

Brooks: You’ll be hearing about some of the things we’ve done. I get very excited when I think about what compute can add to — you’re changing the display technology, effectively, by putting something directly at or into eye level. I’ve seen demos of text messaging and email in front of glasses that look no different than the ones I’m wearing today.

I get very excited about augmented reality and the ability, as a biker or runner, to track my distance, to know my route, to know where my friends are, to get those important messages to come up. All of that is a lot closer, on the AR side, than people perceive.