I’ve never paticipated in a serious game of Dungeons & Dragons. The handful of campaigns I played with my college roommates involved a lot of drinking, backstabbing, and other in-game scenes too graphic to write about here. During one memorable moment, someone in my group (playing as a madman) murdered dozens of helpless half-human, half-spider orphans we found in a cave.

Instead of having a party filled with elaborately dressed wizards and paladins, your characters are high school stereotypes simply pretending to be wizards and paladins. Sitting across a table from them is their Game Master, who narrates the story while the scenery unfolds around them.

It’s a unique concept that leads to a few really funny moments. But the dual storytelling approach isn’t strong enough to sustain the lengthy adventure. By the time I hit hour 10 on the PC version, I just wanted Knights of Pen and Paper 2 to be over. 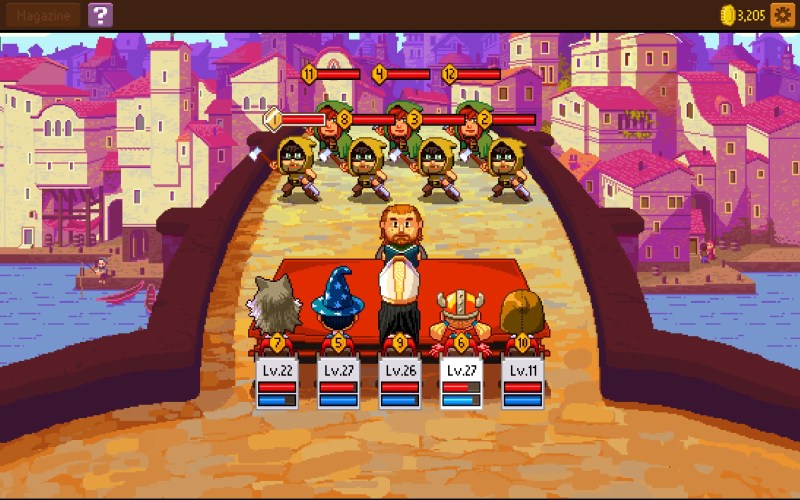 Above: Characters attack from their seats.

Assembling your band of dice-wielding warriors is like a fun mini-game of its own. You get to choose the type of person (nerd, jock, cheerleader, etc.), the species of their character (humans, elves, or dwarves), and the class they play (paladins, ninjas, thieves, and more). Each person comes with their own passive abilities, like how the rich kid can make your team earn more gold after every battle.

The group I ended up with had the aforementioned wealthy teenager (he was my mage), a cheerleader warrior dwarf with blonde pigtails and a thick brown beard, a goth elf who was a life-restoring cleric, and a nerd barbarian who wore a wolf pelt over his head. They certainly aren’t your usual RPG heroes.

It has plenty of amusing gags

You’ll encounter all sorts of oddities as you chase the villainous Paper Knight in the world of Paperos. Early on, you meet the ugly troll who only talks in leet speak, and an alchemist who looks a lot like Mario. Other character appearances are more subtle, like the smirking Ecce Martinez, whose name and face come from the infamous restoration project (and fodder for memes) of an old Spanish fresco of Jesus Christ.

Knights of Pen and Paper 2 has a ton of these visual gags, pulling from both gaming and pop culture history. I can’t remember the last time a game referenced The Toxic Avenger.

Kyy Games also incorporated some humor into the mechanics. You can peruse fake tabletop magazines that flesh out the world and offer bonus content you can buy. One of them is an expansion called Fist of +1 Fury, which contains new areas and a new character class. I didn’t really think about the expansion until I accidentally triggered a story quest that lead into it. A character told me I had to buy Fist of +1 Fury to continue, so I went to the magazine and saw that it cost 4.99. I assumed that was in dollars.

I immediately thought, “How dare they charge five bucks to continue a quest I’m already on!” I clicked the buy button, but instead of Steam asking me for money, I saw my gold count at the top corner of the screen change. Yup, it costs 4.99 in gold pieces. I had almost 700 at the time. Well played, Kyy Games. Well played. 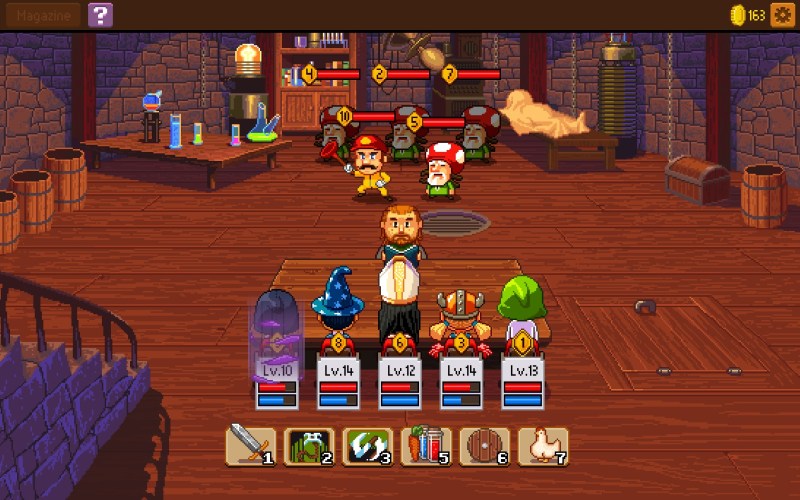 Above: Professor Mario and his mushroom pals.

The rest of the jokes are hit-or-miss

Some jokes go a little too far, like the way the characters complain to the GM about fetching items for other people all the time. It would’ve been funny the first two or three times, but the game has a bunch of these quests. At one point, I had to keep fighting a group of monks just to prove I was “worthy” to speak to their leader — I fought them almost every time I returned to their temple. Again, the characters repeatedly complained how ridiculous this is, but that didn’t stop the battles from happening. It wasn’t fun at all.

Knights of Pen and Paper 2 also uses acronyms and other jargon that just flew over my head. But that probably has more to do with my limited experience with playing tabletop RPGs.

Except for a few boss fights, Knights of Pen and Paper 2 isn’t very challenging. Once I chose my first five characters, I didn’t really feel the need to swap them out with new people (you can store extra characters in a tavern). I quickly settled into a routine. I’d cast my mage’s spells to hit multiple enemies at the same time, use the cleric to heal anyone who’s hurt, and then use the other three characters’ physical attacks.

I actually started to fall asleep at certain points during the game because of how dull this became, especially in quests that had back-to-back battles. And once I got in that sleepy mindset, it was hard to break out of it. I skimmed the dialogue and clicked through the battles as fast as I could. I listened to podcasts just so I had something else to do other than stare at the screen.

Using new characters temporarily disrupted my hypnosis, but it didn’t take long to fall back into a rigid pattern. The flow of battle just isn’t very interesting, which is a shame because all the monsters and bad guys look pretty good. 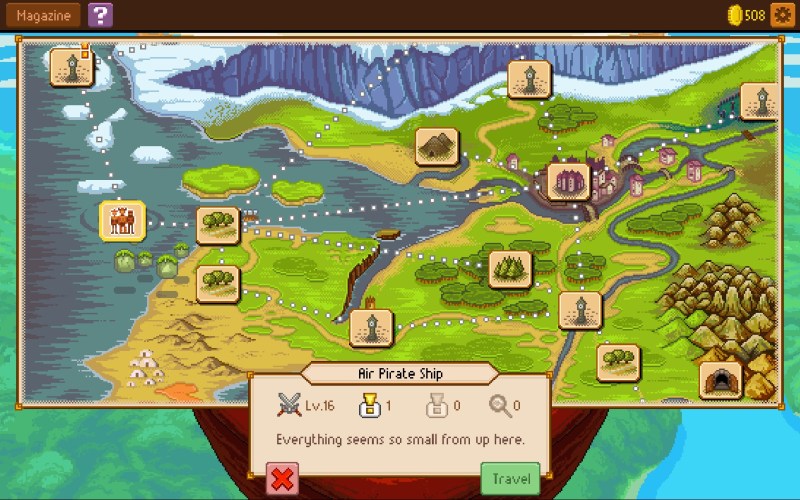 Above: The world of Paperos.

You can only take on one quest at a time

This isn’t the kind of RPG where you can walk around and explore, so the towns, fields, and dungeons are just backdrops for the story. Together, these areas form a reasonably sized world, but you’ll crisscross through the same places over and over because you can only go on one quest at a time. This gets really annoying when you start travelling between opposites sides of the map, often visiting the same places you were just in during an earlier quest.

An airship obtained later in the game somewhat mitigates this by providing a shortcut to specific places, but it’s not enough. The boring battles don’t help, either, as a simulated dice roll determines your chances of being in a random fight whenever you’re traveling. Backtracking sucks if you get a bad series of dice rolls. It’s such a pain. Carrying more than one quest would’ve made the game shorter, but that would’ve been a good thing.

I wish I liked Knights of Pen and Paper 2 a lot more than I did. It has a lot of charm and heart — I can see it in the gorgeous pixel art and in all the neat jokes and references built into Paperos. But it just isn’t very fun to play. If you happen to be in that cross-section of being both a tabletop player and an RPG fanatic, it might be worth checking out. For everyone else, however, your time is better spent elsewhere.

Knights of Pen and Paper 2 is out now on PC, Mac, Linux, iOS, and Android. Publisher Paradox Interactive provided GamesBeat with a Steam code for the purpose of this review.