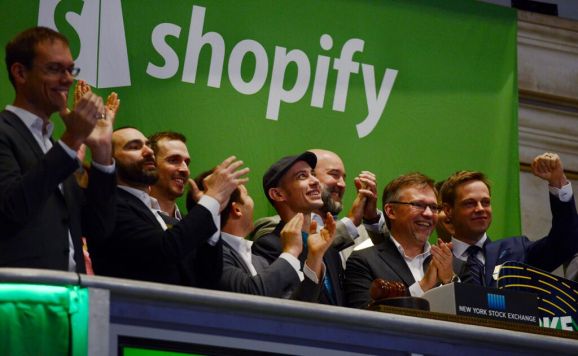 Shopify exceeded expectations again this quarter with revenue of $52.78 million against a projected $47.64 million, delivering 93 percent year-over-year growth. The company also delivered losses of $0.06 per share, which analysts expected.

In pre-market trading, Shopify’s stock is up 8 percent.

During its first quarter as a publicly traded company, the ecommerce platform bested estimates on both revenue and earnings, pulling in $44.9 million in the second quarter, a 90 percent increase year-over-year. Investors thought the company wouldn’t be able to sustain such high growth into the third quarter, but Shopify has proved them wrong.

Its strong quarter may have to do with a series of partnerships the company has been busy forging. For instance, this quarter Shopify became one of few payment processors to power buyable pins on Pinterest, buyable ads on Facebook, and Twitter’s Buy Now button.

Additionally, the company struck up a partnership with Uber to enable merchants to offer same-day delivery to customers. Yet another victory came when Shopify teamed up with Amazon. The Everything Store decided to offer Shopify as an ecommerce solution for merchants with Amazon web stores. As part of the agreement, Shopify merchants are also now able to ship from Amazon fulfillment centers. Down the road, they’ll be able to sell on Amazon through Shopify’s platform.

Shopify’s fourth quarter guidance was optimistic. The company estimates it will bring in between $59 million and $61 million in revenue next quarter. For the full year, Shopify says revenue will fall between $194 million and $196 million. Its GAAP operating loss will be a bit higher next quarter — in the range of $7 million to $8 million. In total, Shopify expects operating losses of $18.5 – $19.5 million in 2015.