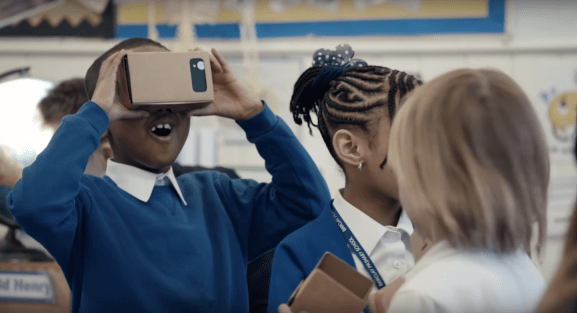 You can now watch all YouTube videos in virtual reality.

Today the company announced that YouTube will support VR video. More than that, the platform is also making existing video viewable through a VR headset:

Our second bit of news is for the universe of existing YouTube content. And that’s the fact that you can now watch any video using Google Cardboard, and experience a kind of virtual movie theater. Just select the new “Cardboard” option from the watch page menu, drop your phone into your viewer, and you’re done.

Now YouTube videos will have a little icon featuring Google’s Cardboard headset that will push users into a VR viewing mode. Once there, users just need to pop their phone into a smartphone-compatible headset like the Samsung Gear or Google’s Cardboard and begin watching.

Sadly for iOS users, the new YouTube VR experience is limited to Android for now.

Google has been playing around with virtual reality for a while now. In addition to building its Google Cardboard VR system, the company also has been slowly making certain Google products VR compatible. Last month it turned the Google StreetView app into a 3D viewing experience.