The hype around Call of Duty: Black Ops III couldn’t be bigger today as the game formally launches. Players around the world attended midnight store openings so they could be the first to get the adrenaline rush of the latest Call of Duty experience, which Activision touted as a “Call of Duty game like no other.”

The series has more than 100 million lifetime players, and it has generated more than $10 billion over more than a decade. The big question is whether the latest game, Black Ops III, will return the series to growth, as the previous titles have shown some decline since the last Black Ops title. To make sure that the growth happens, Activision Publishing, a division of Activision Blizzard, is turning up the noise.

Call of Duty ads are ubiquitous across all media. Eric Hirshberg, chief executive at Activision Publishing, said at the company’s investor day in Anaheim, California, said that yesterday, before the game was launched today, Call of Duty: Black Ops III was already the most-watch game on gameplay livestreaming Twitch. I’ve played the single-player campaign, and Activision is right about how the story is like no other Call of Duty game. 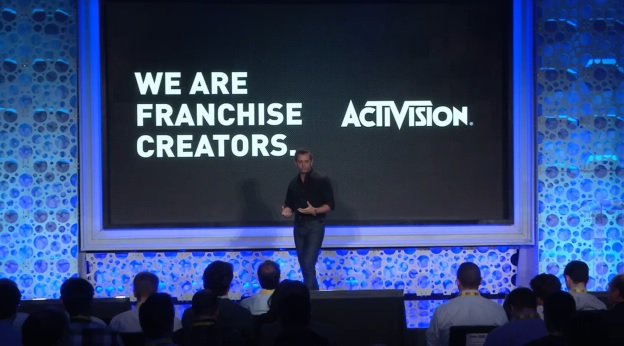 Black Ops III will also be the debut title of the Call of Duty World League, an esports tournament league. Call of Duty is already the No. 1 esports game in the world, according to Hirshberg. Market researcher Nielsen says the game is the “most anticipated multiplatform game of the season.” The tournament will have a $3 million prize pool in 2016.

Now the company is launching four map packs a year to keep its fans happy year round. Activision is using social network effects to increase scale. It is producing ongoing content, improving its technology for online play, and it is investing more in talent.

“This is a business of passion,” said Hirshberg. “We make people say ‘wow’ for a living.”

The Black Ops series, built by Activision’s Treyarch studio, has a history as the “most played Call of Duty series of all time.” Call of Duty: Black Ops debuted in 2010, and Black Ops II came out in 2012. The new title showcases what a game studio can do under Activision’s new three-year development cycle for Call of Duty, as developer Treyarch alternates years with Infinity Ward and Sledgehammer Games in developing Call of Duty titles for each year.

In this story, the game captures a future where the line between many and machine is blurred in the aim of creating the ultimate killing machine. The new Black Ops universe is set in 2065, in a world dominated by cutting-edge tech, the fusion of biology and cybernetic enhancements, all in the name of creating a new breed of Black Ops soldiers. The range of gameplay is broad, from ground combat to flying jets, and the 11-mission single-player campaign story takes a lot of twists. Movement in the game is different as players can seamlessly chain together movements such as shooting while running on walls.

That brings a new experience to multiplayer combat, which is where players spend most of their time. Black Ops III lets players choose from nine elite Black Ops soldiers, each with their own look, personality, voice, weapons, and abilities. The game also has the latest chapter in the cooperative play of Call of Duty Zombies, where you team up with others to shot as many zombies as possible.

“Black Ops III has been a true labor of love for us at Treyarch,” said Mark Lamia, studio head at Treyarch, in a statement. “I am so proud of this team, who from the onset, challenged themselves to push our creativity, our craft and our technology to the limits with Black Ops III for next-gen platforms.”

PlayStation 4 fans are getting a custom bundle with the game and a 1-terabyte hard disk. Activision has a year-round Season Pass, which gives players access to all four upcoming map packs for $50.