ANAHEIM, Calif. — Warcraft the movie, based on the massively multiplayer game World of Warcraft, captivated BlizzCon audiences today. Director Duncan Jones and the actors discussed the film at a press conference after the opening ceremonies.

“It’s huge for us to show it to the fans and to the people who have been waiting to see it,” Jones said, adding that he was grateful it was available to fans everywhere, not just at the show. “I’m glad that everyone’s getting the chance to see stuff.”

His vision for the film helped to win over Blizzard Entertainment, maker of the Warcraft games, because it didn’t vilify either of the games’ factions: the human-led Alliance or the orc-dominated Horde.

“I think Blizzard has been ready and willing to make a move in the Warcraft universe for a while now,” Jones said. “The project they were looking at before, felt a little like humans are good, everything else is bad. The thing I love about Warcraft is that you get to be the hero no matter what your origin happens to be. [The orc] Durotan gets just as much time as [Alliance king] Lothar.”

“The truth is, it’s kind of risky,” he said. “Why would you risk doing a film? The game has been really loved for a very long time by the Warcraft player base. We at Blizzard still don’t quite get our heads around how sacred that is to our player base.”

But in the end, the ability to take the Warcraft story beyond the games’ borders was irresistible. 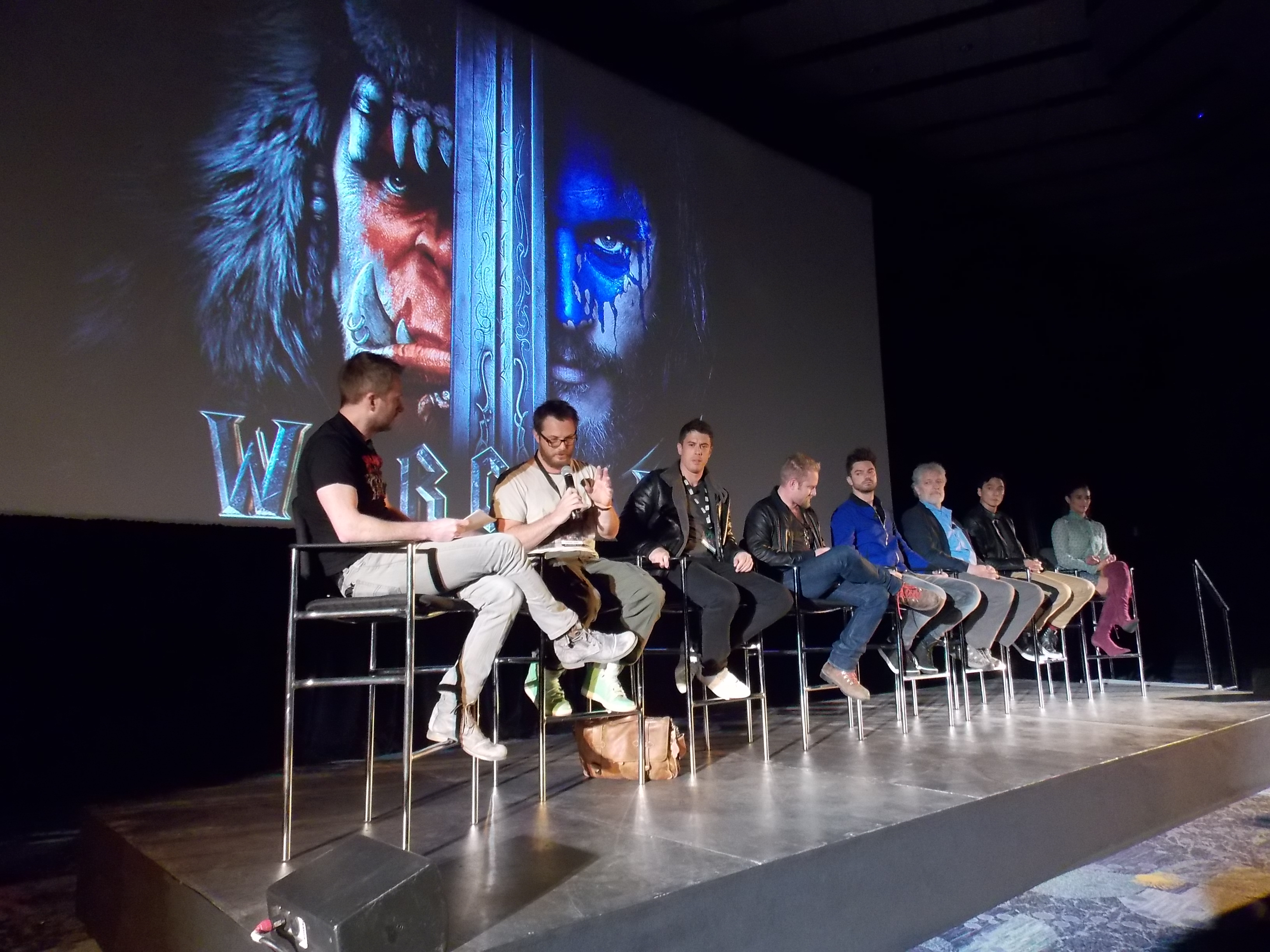 “This was something that was super important to us,” Metzen said. “We sat down with Duncan and he showed us his vision, and we were like, he was pulling thoughts out of our head. This man has lived Warcraft. He gets the details. He appreciates the nuances.”

The director had played the Warcraft games, they note.

“It’s a chance to show people we love what has gripped us all this time,” Jones said.

One of the fun facets of the movie should be the Easter eggs that longtime fans of the universe will see on screen, he said. Some sites have already begun dissecting the trailer frame by frame for links to the Warcraft and World of Warcraft zones.

“That was the plan right from the start,” Jones said. “If we could do this right, we could put our audience right into a world that seems rich and lush. But for fans of Warcraft, you’ll know every detail.”

Toby Kebbell plays Durotan, orc chief of the Frostwolf Clan. All of the orcs are computer-generated, but based on motion and face capture of the actors. That added to the physical challenge, he said.

“You need such a strong direction to take you through motion capture,” Kebbell said. He compared it to showing a kid a magic trick: If things go well, it’s magic. If they don’t, the kid will point out that your hand is behind your back. “As soon as you fall out of the character, you’ve lost everything. And it was such a beautiful role.”

CG was unavoidable for this film and this role, he said.

“It needs the skin of Durotan. It needs every tooth, every hair, every bit of him to be seen on screen. Then he just needed to be given a soul.”

Dominic Cooper plays the human King Llane. The sets for the film were elaborately built — and huge, he said. Not being a Warcraft gaming vet, he was surprised by the size of the movie’s setting and props.

“I didn’t have a clue what I was getting myself into,” he said. “I had no idea what the scale was. I had a sword I had to train with, just to lift it.”

“Medivh is a guardian,” he said. “He’s been charged with taking care of a realm. He’s trying to protect his corner of the world. He no longer wants to participate, and he’s isolating.”

Daniel Wu plays Gul’dan, the perpetually hunched orc mage who in traditional Warcraft lore entices some of the orcs to drink demon blood in an attempt to gain power and save their clan — to disastrous effect.

“He’s trying to ensure the survival of his race, but he’s using methods others don’t agree with,” Wu said. “He thinks that’s going to be what saves all the orcs.” 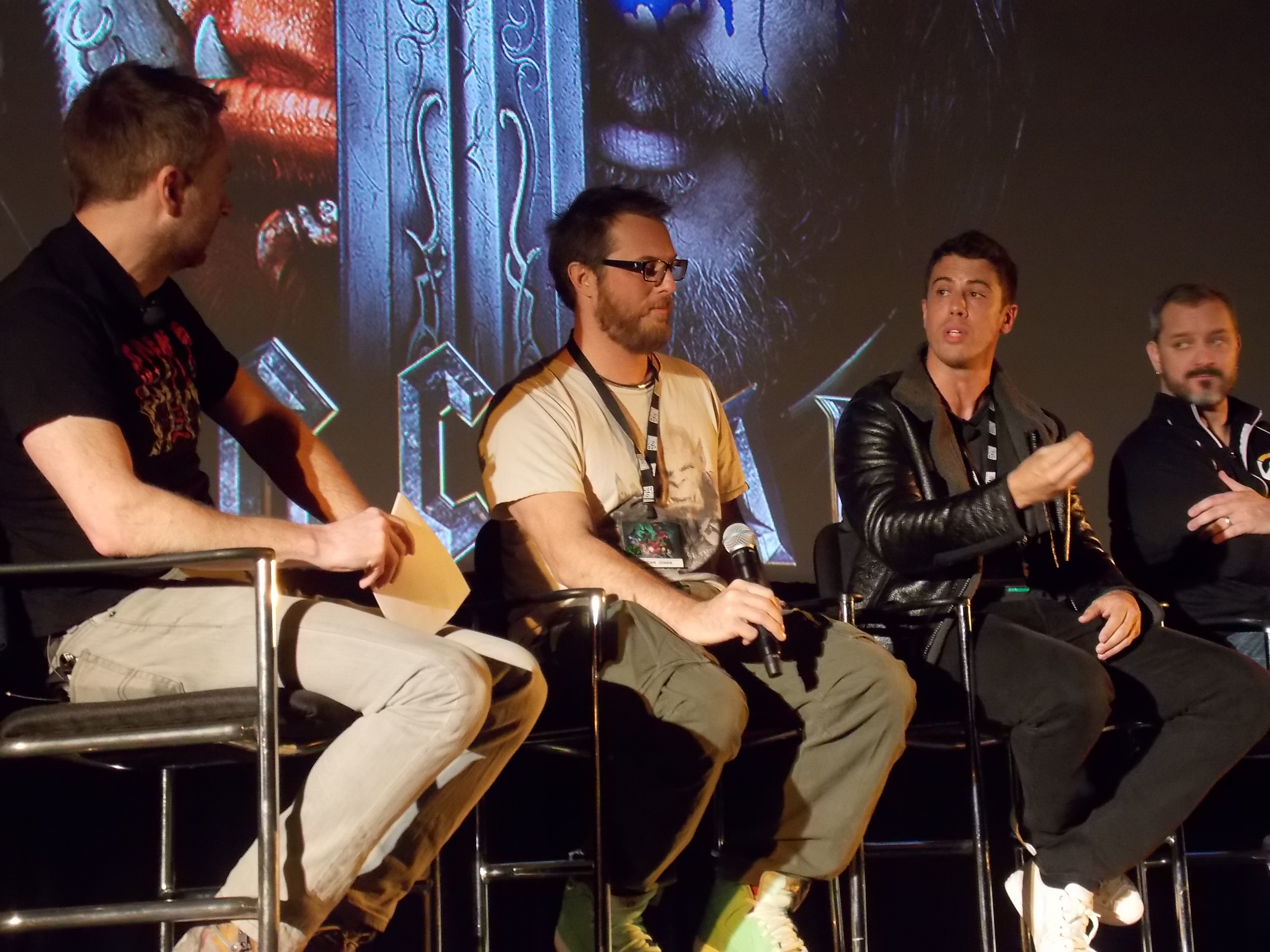 Above: Movie stars aren’t allowed to touch their feet on the ground when they sit.

Wu got his information about the character at home: His wife plays World of Warcraft.

“Every night for five or six years, I’d be looking over her shoulder. After I got this role, I started to dig into her for information,” he said. That doesn’t mean he was a fan. “I was the one who told her to stop playing the game, but then I realized that was detrimental to our marriage.”

The actors and stunt people went through an “orc camp” put on by motion coach Terry Notary, Jones said, creating a vocabulary of movement for the orcs to call on during motion capture.

“In some ways it’s like playing a game yourself, but instead of using a keyboard, you’re using your body and face to make a character come to life,” Wu said.

That was a particular challenge for Wu, whose character had a distinct look with bent legs and an almost hunchbacked pose.

“Gul’dan has the most unusual posture of anyone on film,” Jones said.

“You’re in a squat hunched over throughout the whole entire shoot except for… well, we can’t reveal that,” he joked.

Paula Patton, who plays half-orc, half-human Garona, had the most to say about story.

“I was sent the script and I loved it — it read like a novel,” she said. “The game is really that complex and deep, that it feels that way, because there’s a history and a background to each character.”

As for Garona, “This is a really challenging character to play. Where do you do research? Find a half-orc, half-human? That was the fear. Anything that scares you is something you’re meant to do. I jumped in and put the tusks on.”

She used the parallels she saw in the real world, she said.

“The depth of human emotion that we all had to portray… it is entertainment, but it really mirrors the world that we’re in right now, that the idea of good vs evil doesn’t really exist. You have two people from two different worlds who want good for their country and their family — neither one of them you can judge. And then there are people who mismanage power and become corrupt by that.”

Jones said Patton’s character was key to the film.

“Garona is at the heart of our story, the heart of everything,” he said. “Garona is the bridging element between two cultures that have never met and are meeting for the first time. Garona is the eyes on that conflict. She is stuck in the middle as a keystone character.”